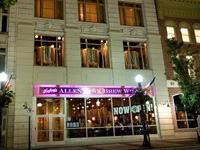 Notes: In 2010 the beers from both brewpubs will be called Fegley Brew Works brands, though the names of the brew pubs will remain the same.
BEER STATS

Mediocre food. Terrible customer service. Failed to provide the beer that was ordered and made the situation worse by ignoring requests to fix the problem. Do yourself a favor and just skip this customer unfriendly brew pub.

I know it sounds weird, but I've been wanting to visit Allentown for the longest time. Mostly for the art museum, which has an original Frank Lloyd Wright library... so the wife and I finally made it to this not-so-pretty, rather-ghetto town on a Saturday night. We had a hotel in downtown, and Fegley's was a couple of blocks down from our lodging.

What an odd jawn. It is like a nightclub and sort-of-trendy restaurant (completed with bouncers and dance tunes) that happens to have a brewery inside. They bill themselves as the "largest restaurant in the Lehigh Valley". OK.

We were there late on a Saturday night and the bar was sparsely populated. They have 14 taps with a bit of every style produced by Fegley's, plus around 17 bottles with more Fegley's stuff. I'm sure you'll find something you like here; I personally go for their Triple IPA and their bourbon-barrel Imperial Stout if it happens to be on tap... but they are not the most exciting brewery around. I did have a nice, super-tart two-year-old Berliner Weisse.

Service is fine and the brews are good and fresh, but I don't dig this joint's weird vibe.

Stopped by on May 24, 2015 for dinner with the family. Nice and inviting atmosphere with a nice look to it. Our waitress came over quickly to take our drink orders and I had the Time Bomb IPA, while everyone else had water or soda. The beer was just tapped at the Allentown and Bethlehem locations on May 21st, so this was fresh and I added it to the website as well! Our waitress was more than helpful; made a couple of suggestions and was patient while we decided on what we wanted to eat. There are plenty of food and drink selections to choose from, to fit all appetites and preferences. I had the newly added fish and chips, which the beer batter was made with the brewpubs own amber lager, the 2 pieces of cod were HUGE, looked a little over-fried but were excellent and the fresh cut fries were delicious too! The wife got the grilled chicken sandwich with cheese (she enjoyed it), oldest son chose the Iron Pigs pulled pork (named after the local AAA minor league baseball team of the Phillies: Lehigh Valley Iron Pigs; which is also served at Coca-Cola Stadium) we has to stop him from eating it too quickly! Our daughter got the mac and cheese; it was fantastic and our youngest son got a cheeseburger (his usual), he ate the whole thing quickly too! The desserts were great too! Chocolate cheesecakes made with the house porter! Creme brulee for the wife and I and an ice cream sundae to round it out for the youngest.
The check came and we thought the menu said that kids eat free on Sunday's from 4-6, The waitress told us it was for "mug club members" and asked us if we wanted to sign up; which of course we did! Which was really helpful!
Definitely gonna head back again some day!

Went to Allentown BrewWorks on May 24th, 2015. Our bartender was Kyle and dude was pretty awesome. I had the bean soup and the nachos w/ guacamole and enjoyed both. Sat at the bar, which had 4 or 5 large tv's with various sporting events on. Thankfully, I don't live in Allentown, but if I did this would easily be my go-to place. Excellent vibe inside, liked the place so much I bought a t-shirt.

Outstanding family brewery, you will not be disappointed.

Extremely average experience and food quality has slipped since it was opened.

Kind of flashy. Not really a beer geek kind of place. I felt underdressed if that's possible. Food good, joint is loud and busy, not really conducive for beer loving.