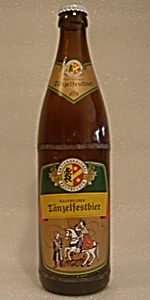 Bottle from Gourmet Haus Staudt. Pale amber in the glass, a slow pour yields a small but thick and lasting head. This is rather pale and golden for a marzen, but it does look appetizing.

It smells of sweet and bready pale malts. Having had a number of Aktien beers in the past months, I've also come to notice a honeydew/melon character from their house yeast, which is again present here.

Taste mirrors aroma, with a big malt character reminiscent of light honey and dessert breads. I find myself wanting more astringency and bitterness from toasted and roasted malts, but this is pretty good nonetheless. There's a touch of spiciness round the mid-palate, which follows through into the finish and meets a hint of hop bitterness, though this really is a malty and sweet beer on the whole.

I've never been able to fully appreciate these lighter, sweeter marzens, and this is no different. This is certainly a solid beer, but I won't reach for it again any time soon.

Grabbed this lighter-colored marzen at State Line a while back.

The pour is gorgeous, light orange with a dense, white head with great retention. Lacing is minimal.

The nose is sweet and doughy, with some honey present. Mildly fruity, with ripe and sweet grapes. Not very complex, the bitterness is on the lower side.

The palate opens moderately sweet with a pleasant blend of dough, honey and caramel. Far from cloying, the depth of malt flavors on the palate is quite enjoyable. Mildly spicy with some phenol character which, while unusual, is welcome. Drying on the finish, there's some mild gassiness present. Quite a showcase of what lighter malts are about, this is nicely balanced and easily drinkable. A little grainy huskiness balances the sweetness, and the creamy carbonation make for a great palate. Well done!

I'll admit it, last year was a poor year with me tasting O-Fest beers, so....I've decided to a have a short tasting of German O-Fest beers over the next few days (aka German Oktoberfest Invitational!). Four German beers strive to be the king of O-Fest, but which one? Tanzelfestbier gets the first nod. Let's do it:

A paler orange/tan colored beer in my stange, with ample inch thick head and lots of carbonation bubbles in the body. Lots of apple cider notes in the aroma initially, the sweetness levels out to let in more malty aromas. Apples skins are noted too, along with notes of wood.

A sweet tasting O-Fest. There's certainly a lot of apple character in this beer. Apples, apples. There's no "imported taste", which is nice. I'm thinking apple strudel as I drink this. Slight brush of grassy hops as the beer dries. A bit one-dimensional is my only qualm. The half-liter I'm drinking now is a good quantity.

Tanzelfestbier is the first beer of the tasting, and also the first to set a bar for the other three. I'll be back to taste the second beer of the German Oktoberfest Invitational.

Tanzelfestbier pours a lightly hazy golden body beneath a massive head of creamy white froth. The head retention is quite good, and it slowly dwindles to a creamy surface covering. The lacing about the glass, however, is simply average.

The aroma suggests sweet bread with a delicately toasted crust; and perhaps some dried fruit, cut grass, and dried herbs in the background.

The flavor delivers the same bready sweetness found in the nose via its rich maltiness. Some soft, spicy and herbal hops balance that out, and a firm bitterness assures that it's kept in check. It finishes surprisingly dry given the amount of maltiness at the outset, leaving it rather drinkable.

Nicely done, and certainly worth trying.

Clear yellow colored beer with a small head. This is the lightest beer label as an Oktoberfest beer I have ever seen.

Smells malty with a strong grassy hop aroma. There is also a bit of toasted bread aroma here, but the grassy hop completely dominates here.

Starts out Malty with a stout hop dose in it, reminds me a lot of the taste of Bitburger. Sweet fights herbal hop here on the tongue, it is quite pleasant. Aftertaste is barnyard straw hay.

Very tasty beer here but I don't know about the classification. Think it would fit the German Pilsener category better, but that is academic

The aroma is dusty, with caramel and paper. The appearance is pale gold with a small head. The flavor is like the aroma with a lightly bitter finish. The palate is thin. This is not what a Marzen/Oktoberfest beer should be. It's mostly average and unremarkable.

Poured from a .5L bottle to a very tall glass mug. The Liquid is a pale clear yellow, With lots of carbonation. The head is big, 3 fingers, white and leaves little lace.

The smell is like a wooden basket of bread, veary bready, with some earthy woody notes.

The taste follows, this beer is a pale malt bomb. Not much hops to back an unbalanced stand. This beer is very well crafted in that respect.

The mouthfeel is straight up malty beer, medium body, good carbonation, everything in line.

The drinkability is very good. This beer fits it's style, it is nice big and malty with balance. Very vice when fresh. Prosit mk