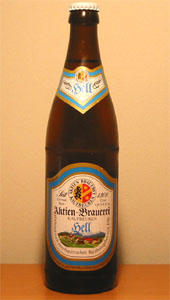 Reviewed by Hanglow from Scotland

Decent helles, ticks all the boxes. Perhaps a tad more bitter and hoppy than your typical helles.

Would buy and drink again.

It has existed since 1308 apparently, wow! As it is called Hell it was probably a favourite of Hitler and Goerring

Rather a unique lemonny taste. I love unique beers. But it reminds me too much of a corona with a lemon in. I think the more I drink it, it will grow on me, let's see. It certainly doesn't make me think of hell. It needs to be stronger and darker for that, like the Belgian Satan. Or a double Jaegmeister with absinthe. This reminds me of summer on a yellow lemon farm in Tuscany, Italy. Not that I have ever been to a lemon farm there, but you get the idea. Maybe.

As the beer warms up a bit, the hops are coming through more. They are a little flowery like Czech beers. The more I drink of this, the more it is growing on me. As I predicted ; )

This is much better than a Corona with a lemon in. Coronas should have limes anyway, not lemons ; )

So yes, I kind of like it...the lemon hoppy fusion is unique and very refreshing. I will buy another one and drink it on my balcony tomorrow in the sun. But the maltiness is pretty hidden, and it really is kind of like a lemonade pilsner spritzer a bit too much. Not that I have ever had one, but it is how I imagine it to be.

It is not hell and not sure why it is called Blaue, except the colour of the bottle. For hell it should be red and black ; )

So loses a few extra points for not being like hell, and too much like a happy, summary, lemonny refreshing beer ; )

Will definitely buy another one tomorrow though.

High minerality and a lack of crisp clean pale malt flavour indicate this bottle might be a bit old, but it seems like a balanced and enjoyable if faded helles...shame the brewer sees no need to clearly indicate a bottled on/best before date.

Rated by Malacant from Louisiana

3.9/5  rDev +3.7%
look: 3.25 | smell: 3.75 | taste: 4 | feel: 4 | overall: 4
Poured from a bottle into a pint glass
Appearance – The beer pours a clear golden amber color with a one finger head of thick white foam. The head has a moderate level of retention, fading over time to leave a smaller amount of foamy lace on the sides of the glass.
Smell – The aroma of the brew is strongest of a grainy and rather musty aroma mixed with a little bit of a toast. Along with these smells comes a good sum of caramel, bringing an nice sweeter aroma to the brew and making rather approachable.
Taste - The taste begins with the caramel and the bready graininess that was detected in the nose. Along with these flavors comes some light herbal hop and hay. These flavors all remain rather constant and take the taste to its end where they are joined by a touch of grass to leave one with a nice refreshing and flavorful lightly sweetened and hopped grainy taste to linger on the tongue.
Mouthfeel – The body of the brew is medium in thickness and creaminess with a carbonation level that is rather average as well. For the style and the flavor profile the feel is quite nice and makes for a very easy sipping brew.
Overall – A nice easy drinking lager with a good amount of flavor. Well done and tasty.

3.4/5  rDev -9.6%
look: 3 | smell: 3.5 | taste: 3.5 | feel: 3.25 | overall: 3.25
ABK Hell Blaue six pack purchased for a bargain price in Feb., 2019. Chilled bottle poured into a simple pint glass. Sample has a slight haze and minimal head or lacing, possibly indicating the bottle might be over the hill. The initial impression is of a slightly thin, fizzy beer. The aftertaste is satisfying, almost enough to make up for the initial deficiencies. There is a nice hoppy bitterness with some lingering malt. Later I tasted the beer at a temperature of about 50F. The flavor comes forward with a malty aroma and body, balanced by the bitterness. I revised the "taste" rating up from 3.25 to 3.5.
Feb 11, 2019

Reviewed by LarryHoffman from Texas

Rated by NeilSilber1 from California

OKAY, sold as a “pale ale” but think it was a Germany lager.

3.76/5  rDev 0%
look: 3.5 | smell: 3.75 | taste: 3.75 | feel: 4 | overall: 3.75
A: The beer is clear light yellow in color and has a light to moderate amount of visible carbonation. It poured with a finger high bright white head that died down, leaving a thin layer of bubbles covering the surface and a collar around the edge of the glass.
S: Light to moderate aromas of bready malts are present in the nose.
T: The taste follows the smell and is mostly dominated by flavors of bready malts along with bits of grain and a slight amount of bitterness.
M: It feels light- to medium-bodied on the palate and has a moderate amount of carbonation. The overall mouthfeel is a bit dry and chalky.
O: This beer is malty but feels a little drier compared to other beers in the style.

Reviewed by tzieser from New Jersey

4.09/5  rDev +8.8%
look: 4 | smell: 4.25 | taste: 4 | feel: 4.25 | overall: 4
Pours a beautiful clear golden color with a fluffy white head that takes a long time to dissipate (though I should've cleaned my glass better, to be honest). It has that wonderful Helles aroma that is always so hard for me to describe. Freshly baked bread, a bit of herbal grassiness from the noble hops. Full bodied flavor from start to finish, has that honey-like malt flavor that I love about the style. Noble hops are there, adding the signature herbal bitterness that keeps this from becoming too sweet. Crisp and dry finish. Overall this was a a great Helles that I'd love to have again. Good price too. 4.1/5
Feb 19, 2018

Grainy and malty. Barely a trace of bitterness until the very aftertaste. This is like a flabby Blonde Ale but with an herbal note. From the half-litre bottle purchased at Liticker's Liquor.

Reviewed by PolishHurricane from New Hampshire

S: Clean smell, kind of like fresh biscuit or just wheat beer. Not super complex, but I like it.
T: I might be wrong, but I keep thinking HONEY taste. A bit nice hop, slight nice dank. It does have a slight bitter at the end, if you look for it, but not unpleasant at all. Pungency/peppery towards the end, love it.
F: Moderate carbonation, nice light spiciness zing feel.

3.77/5  rDev +0.3%
look: 4 | smell: 3.75 | taste: 3.75 | feel: 3.75 | overall: 3.75
Decanted from a 16.9 oz (500 ml) bottle into a Weissbier Vase; batchcode IH BG K CB
A: Pours a ever so slightly hazy, straw color with an enormous (more than 2 in), foamy, white head initially, excellent retention and impressive Belgian lacing all the way down the glass.
S: Aromas of spice, minerals, pear, and bread with a ?licorice note.
T: Dry with light maltiness, subtle perry flavor, and light bitterness.
M: Light to medium bodied. Creamy with moderate carbonation.
O: This is a very nice example of the Helles Lager style. I was surprised to see it in my supermarket. Very drinkable and refreshing.