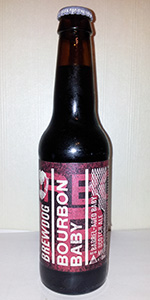 Notes: Bourbon Baby is a baby scotch ale, which we've gone on to age in bourbon barrels. The scotch ale base is light bodied and low ABV, and brings toasted shortcake and blossom honey flavours; the barrel ageing adds a demonic, dark vanilla twist. Rich brown sugar, hints of smoke, spiced fruit, chocolate and raisins are just some of the multitude of flavours that have developed.

Our aim was to showcase barrel ageing in a lower ABV beer and the malty scotch ale base was the perfect way to do this. The body remains light, yet there is a complexity quite unlike anything you would normally expect in a scotch ale.

A 330ml bottle with a BB of Feb 2015, so it's well out of date. Acquired from the Brewdog webshop and stashed away in a cupboard. With the bourbon influence I'm hoping it has held up....

A: Poured into a tulip. Appears bottle conditioned; rather lively. A dark reddish-brown colour that looks black in the glass. Holding it to the light reveals intense carbonation. Yields a large head of creamy tan foam with excellent retention - this slowly settles as a thick surface layer.

T: Tastes of rich bourbon and sweet malt, with notes of caramel/toffee, brown sugar, dried fruit, ale yeast, wood, mild vanilla and vague stewed leaves. A warming whiff of booze in the background, accompanied by a touch of oxidation and a harsh stale quality. Quite sweet, with a moderate bitterness upon swallowing.

M: Mouthfeel is smooth and tingly, with lively carbonation and decent body. A bit thin for the style. Aftertaste of bourbon, caramel malt, brown sugar, fruitiness and ale yeast.

O: A pretty good effort that has held up well, though showing its age a little. Looks great, while the aroma and flavour are a complex blend of bourbon, sweet malt, fruitiness and yeast. Subtle oxidation lurks in the background. Body is OK but insubstantial - could be thicker. A decent entry-level barrel-aged beer. Worth sampling if you like that sort of thing.

Dark brown with a ruby tinge when held to the light. Topped with 4 fingers of light beige, frothy head.

Smells of bourbon straight away. Bourbon, butter, rum, sweet and candy like.

The bourbon is strong on the tongue too. Underneath that, there is a dark, toasted malt taste much like a stout. Butterscotch, hence the wee heavy?

They nailed what they were headed for in the description. Beautiful barrel aging at a lower abv. Really digging this brew. Got and drank in Chiang Mai, June 14th, 2017.

On-tap served in a pint glass at Taproom, Bangkok.

The beer comes with very dark brown to almost black in color with some ruddy tinge around the edge when hits the light, it tops with thick silky tan head that is here to stay with great retention before slowly sinking to everlasting foamy crown on the surface, plenty of intricate, refined yet sticky lacing illustrated along the way down.

In a nose, there is malt as a base with caramel, toasted bread and chocolate. Bourbon age summons vanilla, solid smokiness, and cherry. Some spicy hop with a tart and sour raisin too, very interesting aroma.

Generous malty goodness sweeps all over the palate with notes of caramel, toffee, chocolate, brown sugar, and toasted bread. Then it is bourbon flavor with its vanilla, oaky spice, and smoky, same time as hop yields its solid sourness and tart raisin to add some complexity as well as slight bitter and slight astringency in the aftertaste.

The body is still relatively light even it holds an intense bourbon character, smooth with a soft effervescence through the palate and some crispness, dry finish.

This beer proves bourbon age doesn’t need to be hefty in alcohol and body and still be able to exhibit its rich bourbon character in both aroma and flavor, very whiskey-like, complex and same time so sessionable.

Stumbled across this bad boy by accident. My new favorite scotch ale. It's unlike many scotch ales I've tried before, lighter then it's style suggests. rich malty fragrance, thick brown head, surprisingly delicate as it goes down, and it goes down very easy.

Clear dark brown, fading to black. A two finger high, beige-brown head that leaves a lot of lacing on the glass.

Conclusion: The nose is great and promise a lot but the body and taste doesen't live up to the nose...

I don't know if this beer will get better over time because I will not cellar it. I have my doubts...

So if you LOVE bourbon - Go get it but otherwise... there's a lot of great beers out there...

Pours a deep brown with the barest of heads.Has a light whiff of bourbon and a touch of barbeque sauce. There’s a fair bit going on flavour wise, with toffee, caramel, vanilla, barbecued meat, a bit of dark fruit, and finishes off by a very distinct bourbon whisky taste. Medium bodied with average carbonation.

Pours dark brown with a small off-white head, sticky but short lasting.
Smell of nut, sweet dark malt, some raisin, plus extra caramel and some vanilla from the oak and Bourbon. Smell is not too intense, but nice, even at this low abv.
The taste kinda lacks intensity. The base scotch ale maltiness is pretty light, just a bit toasted, with some nut peel, a bit of cocoa powder, not much. Not too sweet either, just some Bourbon flavor, limited to some caramel and dry malt, considering there's no warm alcohol attached to it. Some nice woody notes in the finish tho, with nice oaky vanilla and a clean dry stave note, plus a bit of bitter hop.
Aftertaste has toasted bread crumbs, some barrel, caramel, crushed nut. Medium to light body, medium carbonation.
I get the "extract" thingie they wanted to make here, but i can hardly see the point. The beer isn't just light, it's... lacking. A lot.

330ml bottle from Good Spirits Co, Glasgow (£4.00):
Another highly enjoyable Brewdog offering, this one definitely goes some way to covering for the disappointment I had after trying their Magic Stone Dog collaboration with Magic Rock and Stone. Despite the fact it probably wouldn't be my first choice of beer to pair with a burger I can see why people would enjoy the two together, it was smooth and not too light with plenty going for it; definitely one worth trying.

330ml brown glass bottle with very appealing red/black label and branded pry-off pressure cap acquired at a bottle shop in Budapest and served into a Zlaty Bazant .3L glass in me friend's gaff there. Reviewed live as a Scotch ale because the label clearly identifies it as such. Batch 051. BB: 24/02/15. "Barrel aged baby Scotch ale."

Served cold and allowed to warm over the course of consumption. Side-poured with standard vigor as no carbonation issues are anticipated.

HEAD: No real head forms, just a grey ring which fades inside 30 seconds, leaving no lacing.

BODY: Very dark ruby, which is opaque and could easily be confused for a black colour. Quite appealing.

Looks undercarbonated. No yeast particulate or hop sediment is visible in the body. Not unique for a scotch ale, but it's a good appearance overall in spite of the lack of a head - which is admittedly troubling at a mere 5.80%.

AROMA: Dark malts, faint bourbon (including oak and vanilla), plenty of sweetness (which is apt given the style), dark sugars, and some rounded Scotch malts. The malty core is fantastic, and is well complemented by the fantastic oak and vanilla. An inviting aroma of above average strength.

Not yeasty or boozy. Certainly not hoppy.

TASTE: Oak and vanilla are prominent, with some dark sugars and plenty of dark and Scotch malts. The sweetness goes well with the bourbon notes, but I do want a fuller more evocative bourbon character. It's well balanced, and boasts plenty of complexity and intricacy for a Scotch ale, but I definitely prefer something like Backwoods Bastard, which has more of a toasty oak character. Marshmallow. I find the honey as a faint sweetness and as something that causes a smoother feel, but it doesn't offer much in terms of flavour. It's well-built, but while cohesive isn't gestalt. Good depth of flavour. Above average intensity and duration of flavour.

OVERALL: A very drinkable Scotch ale with plenty of depth and interesting characteristics from the bourbon. Impressive they can pack in bourbon notes without raising the ABV too much. I'd recommend trying it if it wasn't so damned expensive (in classic Brewdog fashion). It's nice for what it is, and the marshmallow and vanilla are lovely. But it can't compete with superior barrel-aged Scotch ales.

Bourbon Baby from BrewDog
Beer rating: 86 out of 100 with 54 ratings