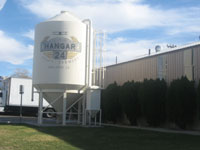 Rated by Flamefighter from California

Reviewed by tzbel013 from Tennessee

Reviewed by Jboadway from California

4.59/5  rDev +10.3%
vibe: 4.5 | quality: 5 | service: 4 | selection: 4.75
This was the first brewery I visited when I turned 21, the local vibe hasn’t seemed to change the local food that comes are always delicious and the staff is always friendly. Some staff does know the beer selection a little better than others if your wanting to talk sample and explore there offerings.
Oct 02, 2018
Rated: 4 by shigg85 from Japan

Reviewed by Santosizer from California

1/5  rDev -76%
vibe: 1 | quality: 1 | service: 1 | selection: 1
Staff can be rude. For instance, today I walk in to grab some beers to go. I have a speech impediment and the manager misunderstood me. When I corrected her, she rudely told me I was wrong, scoffed at having to rerun my order and mimicked my impediment while repeating me what she heard. Mind you, I wasn't rude at all. After the order was worked out, I said thank you and she just glared at me with no response. I don't care the excuse or frustration with work, this was completely rude.

Reviewed by BrahNick from California

4.39/5  rDev +5.5%
vibe: 4.5 | quality: 5 | service: 3 | selection: 5
Bit off the beaten path, but a nice rustic space with mountain views across from a small airport. Crowd tends to be a bit older and very friendly. Usually a wide and fantastic selection with plenty to choose from ranging from staples like the Orange Wheat and Betty to special limited edition kegs.
Jul 08, 2017
Rated: 3.07 by Keeling from California

Rated by IRS4MEPLEASE from California

Reviewed by cmurkar from California

4.14/5  rDev -0.5%
vibe: 4.5 | quality: 4.25 | service: 3.75 | selection: 4.25
The place is located just off a small road behind the Redlands airport. It's easy to miss if you're not paying attention to your directions. Once you see neon signs in the distant and hear the sound of guitar rifts getting louder, you'll know you've arrived at Hangar 24. As a satisfying answer to my curiosity and potentially yours, yes, this place is literally inside of an aircraft hangar. For how they got the 24 however, I'm still trying to figure that out.

There's a few dirt lots to park in surrounding the area. I chose to park on the side of the road a bit closer to the brewery. After a short walk, I had arrived. The entrance to the tasting room was wide open, similar to the entrance of a hangar. Duh.

Once inside, I was greeted by some really cool, unexpected vibes. The brewery has a refurbished, almost industrial look to it. Remodled with brewing addorments and equipments gives it a nice, simplistic aesthetic. The tasting room was small. After a short line, you order your ale of choice and basically find a spot to post up at. Noticed that a lot of people were bringing their dogs into the tasting room. I love dogs myself, so this wasn't a problem, but word of warning to anyone who would otherwise mind a pooch presence. There is an outdoor patio on the other side of the tasting room with live music performances and tvs playing sports, which only adds to the brewery's vibe.

Quality overall was great. The brewery was very clean, and despite how busy it was, plenty of space presented itself to post up and relax at. The only thing I would point out is the lack of real restrooms aside from two portojohns outside of the tasting room. Maybe I mistakenly missed other indoor restrooms, but from my recolection there were none.

Service was ok. Walked up to the taps, ordered my flight and a pint. Nothing more, nothing less.

Selection was decent as well. All of their regular beers were on tap, ready for pints and flight assortments. Lots of speciality and seasonal varieities were provided as well. Their regular taps tended to be more on the IPA side, but hey, I don't have a problem with that at all.

Quality beers all in all, in a quality place.

Reviewed by Beer_Line from California

Reviewed by Reema from California

4.84/5  rDev +16.3%
vibe: 5 | quality: 4.5 | service: 5 | selection: 5
The vibe at Hangar 24 is more than laid back. There's the obvious taps and beertenders that give you beers and there is a community style long table that looks like it could seat 80 people easily. It gets a bit crowded on Fridays, Saturdays, and Sunday during the late afternoon/night but it isn't a hassle to get a brew during peak hours. Their selection of beer is pretty nice and they have seasonal beers that rotate often enough along with variations of their flagship beers. Some of their other brews are just okay but their good brews are damn good. I come here often enough, solid brewery.
Jul 28, 2015
Rated: 3.72 by JohnCassillo from California

Rated by wewalter from Texas