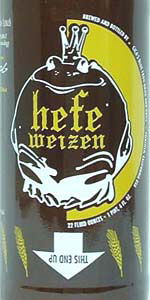 Clear light amber color with a nice pile of foam. Nothing like a yeasty taste, much less any of the German esters. You could hardly call this a Hefeweizen, but they do. It's more of an American Pale Wheat Ale. However, it's nicely sudsy in the mouth.

A smell that doesn't go much beyond "beery." Some tangy notes with a plain malty flavor at first. Thin and sharp. Rather bitter and medicinal in the aftertaste. A bit of wet cardboard. This would score higher as a pale wheat, but it's not much even for that. From the 22 oz bottle purchased at The Bottle Shop in Santa Barbara.

Big thanks goes out to my doppelganger for sharing this one with me on Super Bowl Sunday as a pre-game snack! Served from bottle into a Bell’s stemmed tulip. Poured a hazy golden yellow with a one finger pure white head that subsided to half a finger slowly. Maintained excellent lacing throughout the glass. The aroma was comprised of sweet malt, banana, clove, earth, floral, and floral hops. The flavor was of sweet malt, banana, clove, floral hop, floral, earthy, and subtle tobacco. It had a light feel on the palate with high carbonation. Overall this was a fairly good brew. This one was pretty high up there on the Hefeweizen scale as all of the flavors in a good solid Hefe were there and made themselves known at all the right times. Even with the subtle tobacco flavor I picked up, it still managed to work. All around a very solid brew that is definitely worth trying if you have not already.

The pour yielded a golden yellow body, very fizzy. The fuzzy white head was rapid to raise and fall, leaving pretty much nothing behind.

Upon my first whiff of this, I'm already borderline disappointed. The flavors are pretty subtle, as lack-luster lager aromas pretty much dominate. There are some decent notes of banana and slightly sweet slightly tart wheat tones.

Flavor follows the nose like a shadow. The wheat tones present a tart character and a dash of warmth. Other than that, the same banana esters and maybe a smidgen of lemon arise.

There's a lot of sharpness from beginning to end from the carbonation. It's crisp but seems a little overly fizzy. The body is pretty thin and very slick, and it all gives birth to a dry and slightly resiny finish.

Needless to say I'm a bit let down by this one. It's a 22oz bottle at a big beer price. It's not gagging me but it's not worth it either.

Served in a weizen glass from a 22 oz. bottle. Pours a cloudy lemon orange in color with half an inch of bright white foam. Offers decent retention and light lacing and allows for foam regeneration as needed.

Nose is full of wheat and has a light but positive banana and yeast nose and just a hint of spice. Warms to reveal a more robust and slightly sweeter nose and an occasional whiff of yeast funk.

Wheaty twang in flavor and rather dry on the finish. Dryness keeps the flavors subtle and yields a somewhat diluted finish with a yeasty light citrus and clove close. Yet said dryness doesn't reveal any shortcomings either. Bit thin in feel for a hefe., otherwise a decent offering.

Ordered a 12oz. pour of this at the brewpub in Fairfield on Wednesday. Review written using notes.

Served in a chilled, skinny, 12oz. mug (almost like a stange).

Appearance: A tiny, white, sudsy head sat on top of my beer for about fifteen seconds. After that, nothing remained but a few wisps of white. Lame. Somehow though, it managed to leave sticky rings of lace on the walls of the glass. That's not right. Body was nearly neon yellow in color (similar to Hoegaarden), but lacked the vibrancy (i.e. too dull to be called neon). Very cloudy.

Smell: Smelled like a sour - no joke. This beer welcomed my nostrils with a big blast of vinegar. Ugh! Luckily, repeatedly huffing it caused the vinegar component to fade, revealing wheat malt and mild spice. Gross.

Taste: More like a hefe here than in the nose, but that same sourness still loomed large. Wheat, clove, lemon, and obvious vinegar.

Mouthfeel: Highly carbonated, thin, and only a little wheaty. Acidic. Burned like hell.

Drinkability: By far the worst hefeweizen I have ever had. I would recommend this beer only for novelty purposes. Blue Frog missed the mark badly with this one. I hope that I just got a bad batch. I couldn't imagine ever bottling something this bad.

Pours a hazy blond color with a lot of yeast sediment in the bottom of the bottle. The white head dissipated to nothing. Difficult to see any action.

Has a sweet banana and vanilla smell.

Has a banana and vanilla taste.

The mouthfeel is watery with minimal resin and the carbonation is soft.

The balance is off, I thought this was right on at their Brewpub. The bottling is something difficult to achieve.

Comes in a bomber style bottle. Pours a great looking light yellow foggy color with a nice head and lacing consistant with the style. Smells mostly of yeast with a little banana and clove flavor. Tastes ok with some clove and banana flavour. Kind of peppery in the end. Mouthfeel is kind of light but good carbonation. Drinkability is good because everyone can drink a bunch of hef. But if I had a choice I think I would like to try another beer I haven't tried before.

Poured a straw colored yellow with a small head Nose had light banana, wheat and citrus and not much else. It tasted fairly average across the board and it was a pretty decent hefe all the way through. Worth a shot and drinkability is ok if your like hefe's.

Presented in a 22oz bomber with no freshness date. Screened label states "chock full of wheat malt, floral German hops and that Super Special yeast" Poured into my Franziskaner hefe glass.
Appearance: slightly cloudy golden color. Virtually zero head and what little did manage to show died out in short order. Not what I expect a German-styled hefeweizen to look like.
Smell: oh boy, this isn't getting any better. Nose had a sweetish candy-like aroma but what was absent was the banana-and-clove aromas. Mildly floral.
Taste: soggy grains, some rock candy and no banana or clove flavor. Tastes like a second-rate American pale wheat ale, not a German-styled hefeweizen.
Feel: okay, at least the feel is decent. Light-bodied, decently crisp and moderately carbonated.
Overall; not even close to running with any of the truly German hefeweizens out there. A third-tier example of the style and one I wouldn't get again. A disappointment.

Poured in a Weizen glass, this is a cloudy sunny yellow colored beer with a small for the style white head.

Smell is mildly sweet and wheat malt with a decent clove and banana aroma. Clove and banana are in about equal in strength here. Wheat cracker malt aroma and a bit of spice that smells most like fresh ground black pepper from a pepper mill.

The taste starts out mildly sweet and wheat malt with a banana aftertaste. Moderate bitterness present. Clove and banana are quite understated here and since this costs more than Hacker-Pschorr in the same store I judge this to be inferior.

An OK beer but inferior to a really good one. At $5 a bottle this is more expensive than the real from Germany version. Worth a try and probably better at the brewery but this isn't in the same ballpark as an average German Hefeweizen.

I disagree with the other two reviews as I found this to be an excellent example of a German style hefeweizen and deserving of its' first palce award at the West Coast Brewfest. Tasted on tap at the Brewfest. Definite banana and citrus aroma with more banana and clove in the flavor. Good body as well. Minimally hopped. Very drinkable.

A trip to San Fran, we stopped in Fairfield on the way. Sampler was somewhat cloudy but some clarity as well. A common yellowish color with a limited head and lacing especially for a hefe.

The nose confirmed the hefe essence. Noticeable orange and banana esters mix well with a light wheaty characteristics. Even though a lighter ABV some esters and yeasty smells were evident. The taste mirror the nose with orange banana flavors. Limited hops and citrus notes though. The aftertaste has a light bite that is more yeasty then hoppy and there is a sudsy flavor that deters a bit.

The body is good with a mid feel. Overall this is a good beer, not there best but still a good beer on a hot afternoon.

Hefeweizen from Blue Frog Grog & Grill
Beer rating: 79 out of 100 with 17 ratings