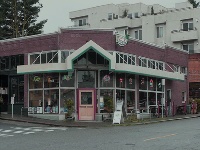 View: Place Reviews
Reviews: 5 | Ratings: 8 | Log in to view all ratings and sort

A place that's especially dear to me, for many reasons. It is "just" a regular ole' neighborhood pub, and so expectations should be set accordingly, but by that standard it is, in my opinion, an absolute standout. The food, beer, service, and atmosphere of this place just tend, invariably, to be a cut-above.

I stopped in at the Latona Pub this last Friday completely at random. Thus, I never knew about the warnings of live jazz music from 5-7. Let me tell you, though -- even with the crowds (the place packed to the rafters, standing room only), a visit might be worth it for the music. Between them, the 3 guys must have been 200 years old and their experience showed.

This bar is obviously not all about the music, though. There were 13 beers on tap when I visited, with some good offerings although nothing especially exotic. I had a tasty Rogue Shakespeare Stout on nitro, which was pretty indicative of the quality/rarity of the beers on tap there in general.

Of course it was busy, but I got served relatively promptly considering the situation. The place seems to be a great neighborhood bar; lots of regulars, lots of old wood, lots of history and ambiance. I can't say as I would prefer to visit on a non-jazz day, though; the place was really alive with all the folks and music.

I should start this review by mentioning that Latona Pub is my local hangout. My house is a five minute walk away so I am definitely biased.

With that said, Latona is a great neighborhood joint with a decent selection of craft beer and fantastic food. The beer selection tends to heavily favor Washington and Oregon beers, but you do get the occasional California (Stone, Sierra Nevada, Green Flash, etc.) keg, along with special offerings from New Belgium. They don't have a crazy number of taps like some other places in Seattle, but everything they have is quality. There is also a good selection of bottles, but I've never even considered ordering one.

Food offerings are primarily salads, sandwiches and burgers, but they do have impressive turkey and meatloaf dinners that tend to sell out nightly. Latona does not have a fryer, so don't expect fries. Everything comes with salad, but when you've had a few pints, the leafy greens really help balance things out.

Latona is also known for their brewer's nights. This past winter they had Rogue, Sierra Nevada, Naked City and Black Raven come in with special beers and giveaways.

A warning, though. Friday nights from 5-7pm there is live jazz music. The music itself is great, but the band has a group of weekly fans who take up way too much space and make it difficult for anyone else to get a table or a place at the bar. If you plan on going on a Friday, go before 5 or after 7. You have been warned.

Just got back from my first Seattle visit, and this place seems to be one of the more underrated beer bars around.

The atmosphere is warm and cozy without many frills, kind of your typical PNW pub. The place is small, and would be an amazing local to have in your neighborhood.

The tap selection is limited, but of their 10 taps, a nice variety of local beers and styles was present. But, the most surprising factor was the food. This is not your standard pub food - the offerings and quality of the food is exceptional. Overall, if I lived in the area, this is a place I could see myself spending many, many hours in.

The only thing that holds this back compared to other beer bars in seattle is the lack of selection, while their quality of beer is extraordinary and literally changes week to week. They could use more bottle selection or a couple more taps.

Other than that the place is ridiculous. It is neighborhood bar atmosphere with at least 3 different IPA's on tap usually followed by a couple rare stouts and last week even had to smoked beers on tap. The food is hippie man food with great burgers sandwiches yet still refuses to fry any food (no fries just salad) which is actually kind of cool. While the food is pricey the beer is great with 4.50 pints.

highly recommend you call and ask what they have if you are going out as it may have a rare beer that can't be found at the other great seattle beer bars.

Overall a great place with great service and great beer.