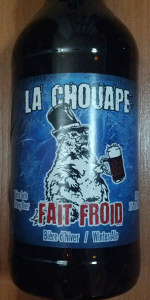 3.56/5  rDev -0.6%
look: 3.5 | smell: 3.75 | taste: 3.5 | feel: 3.5 | overall: 3.5
Fait Froid ("it's cold") looks suited to chilly weather (though any snow-like substance that formed on the pour melts quite quickly). Its terra cotta complexion is deep and dark enough to almost look black at some angles, but prominent clarity and glowing garnet highlights reveal the beer's true colours (literally).

The beer is overtly spicy, but which flavours result from the addition of actual spices and which stem from the yeast is difficult to know for certain. There is no shortage of fragrant notes resembling clove, ginger, allspice and cinnamon but those kinds of nuances are often inherent to Belgian dark ales like this.

What's more confusing is that little of the spiciness lasts through to the finish; there's almost too much upfront, a reasonable amount on the palate, virtually none in the aftertaste. The beer is exceedingly thin for something so dark, spiced, and intended as a winter warmer. This needs more beef on its bones.

Neither rich and roasty nor sticky and substantial, the maltiness tastes more like watered down gingerbread mix. There's a good amount of brown sugar sweetness which, while a pleasant flavour, entirely lacks depth or complexity. The lack of heartiness also allows that 7% alcohol to poke through.

Fait Froit is somewhat warming owing to the unchecked alcohol and uncontested spices, but it's not what I look for in a cold weather seasonal. Summer is the time for mindless thirst quenchers; winter months call for bigger, richer offerings that offer something to savor. This just doesn't have it.

3.5/5  rDev -2.2%
look: 3.5 | smell: 3.5 | taste: 3.5 | feel: 3.5 | overall: 3.5
Bottle: Poured a clear brown color ale with a large foamy head with OK retention. Aroma of dark caramel malt with some light spices notes. Taste is also a mix of dark caramel malt notes with some spices with some candi sugar notes. Body is lighten than I was expecting with good carbonation and no apparent alcohol. Good but I was expecting more spices presence.
Nov 23, 2015
Rated: 3.17 by groleau from Canada (QC)