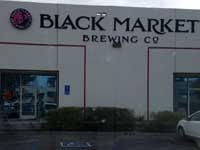 Spacious open tasting room with 3 sided wraparound bar seats about 30. A half dozen picnic tables and a few barrel tables fill the room. 16 assorted beers on tap, the 2 I had were solid. Friendly fast service. They do bar eats and pizza, mine was tasty.

$2 pint Tuesday's! Jumbo Jenga, and other games. Pretty cool spot to hang out at and have decent beers. Vibe was nice and service was good! Would definitely come back and have some beers here. Has the Rye IPA which was good.

Got a chance to go to the actual brewery recently and I really enjoyed it. I went in the middle of the day on a Monday so there was no one really there but based on the set up and the good service you can Tell this brewery has a good atmosphere to hang out at. They are hit and miss on their beers but their IPA's are some of the best I've had. Two thumbs up for Black Market.

Was visiting family in Temecula and decided to head over to take a look with my dad. The outside of the building is nothing special as its located in an industrial park. Walked in the wrong door and saw the whiskey barrels they are aging some stuff in. Damn I wanted to snag one! J/K

Went in the other door and sat down. They had only opened 5 mins earlier. Got a nice greeting from the (good looking) bar chica, Jenn. Very cool and nice to chat with.

I had a flite of about 5 beers. The IPAs were very good. The Quad was very floral and citrusy, and you could tell it was 11%. A couple of those and I woulda been having a siesta.

They had about 8 beers on tap. Everything was great quality. The bombers were $5 each. Pretty good deal.

All in all, it was a great place. Grabbed a shirt for me and a visor for my buddy. Thanks BMB!

EDIT: Went back last month, again with my dad to grab a couple growlers for a BBQ the next day. Looks like they expanded by adding a second bar and some additional seating. More taps all around. Great selection. The Hefeweizen is awesome. Embargo was great. Have to give it an uptick in atmosphere. Like the changes.

Black Market has really stepped it up these last 2 years. They used to not have ANYTHING I cared for (save their Rye IPA). Now they're churning out unique releases pretty consistently it seems.

Tasting room is adequate size but not super posh (even for a brewery). I hope they continue to climb upwards and add to the positive beer scene that Temecula is becoming known for.

I made a trip out to Temecula recently since I was down that way for work and stopped in at Black Market. It's a fairly large spot with a tasting bar up front and additional seating and what appeared to be the brewery and barrel room to the right of that. Service was pretty good but the bartender was pretty pushy about pouring me something after I said give me a few minutes. The beers were served in glassware and at a good temperature. They had about 10 beers on tap when I was there along with a cooler full of bottles but nothing that I haven't seen distributed. Prices are reasonable at around $2 for tasters and around $5 to $6 for full pours. I will definitely stop in here again if I am in the area.

Black Market was my first visit on my Temecula brewery tours, self guided. The tasting room is very cool and casual with a giant big screen for everyone to enjoy. The beer selection was fantastic, the only one I didn't care for was the Heffe which is a beer style I don't really like any ways. The staff was fantastic and the prices were fair. The barrel room was really cool as well. Cant wait for some of the babies to be emptied! Count this guy as a fan and I will return!

Black Market is a must stop in the Temecula beer scene.

Oh and get the Black Hole Sun! It is super bomb!

Has the Inland Empire beer scene taken off or what? Wait, is Temecula considered to be part of the IE? Whatever, the region's beer scene has taken off the last few years, and Black Market Brewing is just one snapshot of it.

The tasting room is small, although the building itself has adequate space. There is a backwards "L" shaped bar with room for 10 people, additional spaces for rest one's drink, plastic kegs with bags of malt as seats, merchandise spread over one wall, and empty growlers from other breweries sitting above and behind the bar.

There's a list of beers available from tap, their ABV, price, and what's scheduled to be brewed when. There were seven options during my visit, ranging from the hefeweizen and Anglo-Brown, to a scottish ale, dunkelweizen, and strong hoppy ale. Pints are inexpensive at just $4.50, and tasters can be purchased too. The three beers I tried we're solid...okay, two of them were solid, one of them was simply delish! An attentive bartender was behind the bar, checking up on my status (and others).

I've only seen a few of Black Market's beers at bars, and I came in hope of finding other Black Market beers that I knew I could find only here. It was worth the visit.

I was pretty impressed by this place. Located in an industrial park in Temecula, these guys make some pretty darn tasty brews.

I had a sampler and thoroughly enjoyed their IPAs and a couple of the others as well. I was visiting the are randomly from Northern CA and had never heard of this place. I hope they get their beer out there, it will definitely sell based on it's merits. Very solid.

The space is basically in the warehouse that is the brewpub. Little tasting room with a small bar and a few tables. Pretty standard for the arrangement they have. Service was very friendly. Excellent brewery that most people have probably not heard of. Check it out if you're ever in the area.

11/5/12 Edit: Visited again about a month ago. Big difference in 18 months. Brewery is now twice the size before, more beers, more swag. Beers are bottled, and distrbuted, and they are starting to barrel aged. Looks like times are good, congrats BMB! Oh, & Black Hole Sun is great. Looking forward to a barrel aged version.

Little story....My wife's cousin lives just a few blocks BMB, in Temecula. (not far from Northern San Diego, but in this area, it's pretty sparse and bare for breweries)

I first read about them in a small blog about a year ago (forget which one) and made a point to try their beers at the time when we went to visit. That was easier said then done back then, since BMB had not been open that long, and only had kegs in a small local airport, (French Valley Cafe, in the French Valley Airport) and a Pizzeria (The Mill I believe) I was able to try their Hefeweizen at that time at the Pizzeria, which was good, but I hopped to go to the tasting room someday, once it opened (since at the time it was under contruction) and trying their full lineup if I could.

Fast forward 8-10 months later, and they have expanded their production, got a distrubtion deal with Stone, and their beers are starting to pop up all over, from Blue Palms, Tony's Darts Away, Instant Replay, Spring Street bar, etc. which is cool, and much closer to me in Northridge, then Temecula (though still gives me an excuse to visit family in the area)

Anyhow, on a recent road trip driving back from San Diego, and searching in vain to try this winery my wife was trying to find (turned out to just be a field of vines, with no tasting room, hehe) I yelped to see where we were, and it turned out we were 10 mintues from Black Market Brewing, and had over 4 hours until their tasting room closed, so we headed over.

The Brewery & tasting room are located in an industrial park, on a road filled with industrial parks, but those other spots all seemed closed on the weekends, so parking was no problem. The space has farily high vaulted ceiling, with the brewing area in the back, and the bar upfront and to your right (plenty of room for expansion, imho)

They have some barrels with cushions to sit on, and while there, they had 4 beers on draft, and we split a tasting flight. (see beer reviews if interested) they also serve full pints as well, so that was welcomed as well. Service was prompt, and great, and the server/bartender was very knowledable about the beers, the brewery, and had purple hair! lol. But the spot is clean, comfortable, and has some personality.

So far they do not bottle, so it's draft at the tasting room, or where you can find their beers at better beer bars. Their beers are good, and above average, though not quite exceptional imho... yet! What I do like is that they are focusing on a small amount of key styles, and refining them, rather than say releasing 4 dozen different beers and seeing what sticks. Also based on my experience at the tasting room, I can't complain about atmoshepre, quality, service, or selection.

They have already won a few awards at the GABF, and are an up and coming brewery, that is slowly expanding, adding just a few beers at a time, while refining their current recipes, so I hope and am looking forward to trying more of their offerings.

The Tasting rooms are:


Black Market Brewing Co. in Temecula, CA
Brewery rating: 3.5 out of 5 with 78 ratings