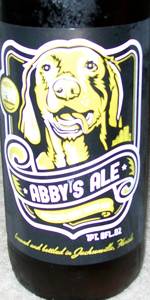 S - Is of sweet malt with fruit and spices

A - Pours with one finger of white foam on top of a clear, amber body. The foam settles quickly but a small head remains on the beer, supported by a steady column of bubbles rising from the bottom of the glass.

S - A strong, bready malt aroma with lots of toasted character. Some subtle fruit character in the background, notes of pear and red apple.

T - Sweet malt up front with a nice, mellow caramel flavor. Some toffee and pear notes in the middle. Finishes with more toasty malt and light hop bitterness as well as a touch of herbal hop flavor.

D - Well, this is actually quite drinkable though weather or not it succeeds as Belgian style abbey ale is another question entirely. It has a nice, round malt profile and enough hops to balance, but the yeast character is kind of subdued and, honestly, not all that Belgian. It is listed as a Tripel; I don't know what it was intended to be, but I know it isn't a Tripel. It doesn't have the color, aroma, or flavor of a Tripel and it has far too weak of a hop character for that style. It seems more like an Amber ale and its subdued yeast character is more reasonable if that is the case. This is not a bad beer, but it is kind of anemic for a Belgian style beer. With a more appropriate yeast character and a dryer finish it could have some potential.

Abby's Ale from Bold City Brewery
Beer rating: 3.63 out of 5 with 6 ratings