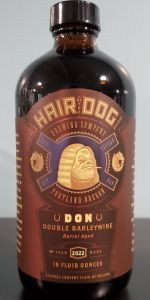 Reviewed by QuakeAttack from California

4.66/5  rDev +2.2%
look: 3 | smell: 4.5 | taste: 5 | feel: 4.5 | overall: 4.75
Sorry, any description of this beer would not give it justice. One of the top ten beers that I have ever tried. It's doesn't pour like a normal beer (it's flat, with a dark brown/black color). No lacing. The level of complexities in this beer is amazing - rye, dates, raisin, carmel, leather, whiskey. It's almost like one of FW Anniversary beers, but on steroids. Sadly, I only bought one before they sold out. I did share with one of my son's.

I will miss Hair of the Dog. Thanks Alan!

Cheers to HotD and the good run Alan had!

4.51/5  rDev -1.1%
look: 3.75 | smell: 4.5 | taste: 4.75 | feel: 4 | overall: 4.5
No bubbles, as advertised. This is a flat, muddy brown. There is plenty of heat and plenty of sweet, they compliment each other well. Up front I get baked apples covered in brown sugar and orange candies, these don't last long. Waves of umami, port, leather, molasses, smoke, and whiskey sweep the fruit aside. The finish is a really pleasant charred wood burn. The body has some heft but is still a bit thin.

I find myself sipping this like liquor. My extremities and belly get that nice warming tingle I associate with whiskey drinking. I'll enjoy this a few ounces at a time in a tumbler over the next few days. This beer is a singular experience, I've not had anything even similar. Better than the 2018 version by far, not even close. Very glad to have some more coming.

Like the original version, the 2022 Don is completely still, and so there's no head or lacing whatsoever in this beer. On the nose, I pick up vanilla, dark fruits and noticeable whiskey, bourbon and rum. It's attractive enough, but the aroma profile really doesn't prepare you for the explosion of flavor on the palate. The 2022 Don is fairly sweet, but the beer isn't cloying and the sweetness isn't overwhelming. There are waves of flavor in this massive beer, as the beer shows the hallmark of considerable barrel aging. The label indicates that this beer was aged for at least 4 years in rye, bourbon, port and rum barrels, and that's apparent on the palate. This beer is incredibly rich and strong (there's considerable heat in the finish, which actually works well for this barleywine), with a long, nearly endless finish. Mouthfeel is very full and smooth, despite the considerable abv. Frankly, I'm not sure if carbonation would improve this beer, as it's pretty fantastic without it. Dyan mentioned in his review that this beer is quite warming, which if anything is an understatement.

An absolute tour de force by Alan Sprints, this is an amazing beer. It's expensive ($31 for a 16 ounce twist top bottle in the tasting room), but I don't regret purchasing the bottle I had at the brewery. Impressive.