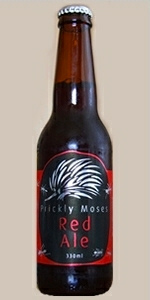 Hazy copper in the glass. Scent is caramel and slightly nutty. A little too sweet for my liking but very drinkable. Overall a beer that goes down easily on a hot day but not one to live long in the memory. Having said that I'm not a huge red ale fan so maybe just the style.

Pours a reddish amber colour, with a filmy but reasonably thick head of creamy white foam. Lacing isn't great, and it swishes around the glass looking a little limp. Can't say it's the greatest look I've seen in a beer, but it's not too bad either.

Odd, slightly cloying aroma on the nose - a little like jasmine tea. hints of resin, a little spearmint perhaps, vanilla and something slightly peppery. Even something a little fishy. It's very odd indeed, although it's all quite subtle.

Taste is again rather odd. Rather thin in the mouth, with a light crushed vegetation character, falling before a subtle but noticeable phenolic bitterness. Certainly lacks sweetness, although the phenols impart a slight vanilla note on the back. It's odd, let's put it that way, although it's not particularly unpleasant.

It's drinkable, and unusual, but not particularly interesting, and stylistically really quite abysmal. I have to say my enjoyment of this comes from its uniqueness rather than anything intrinsic to the beer. Not something I'd necessarily seek out again.

So far this is my least preferred beers from this brewery.
The Red Ale is all a little understated.
It was a trifle bland and fail to convince me it had much character.
It was reasonably blanced but just had no areas with any oomph. Something may have been lost as it was drunk from a bottle , as it was being sold as such , somewhat surprisingly at the Melbourne 3 day event Trade exhibit

Bought as part of a mixed sixer from the brewery.

Pours an earthy red-brown colour with slightly off-white head. Small and not very retentive, forming a visible-bubble crown. Body is slightly hazy, with no carbonation. Lacing is decent but not very sticky. Fairly average - I'd like more head. Plus I'm just mistrustful of beers of this style that aren't nitro-pressurised.

Nose is fairly rich and malty but also largely sour. Fair amount of burnt toffee with a lot of wood - fresh-cut oak and eucalypt wood lends it the sour edge, basically a bit rich and a bit green. A bit lacking, too - nothing special.

Taste does seem to have a fair conglomeration of different malt flavours without a huge deal of flavour. Nutty characters with bready grain, some oak wood and slight smokiness. Finish is a bit of sour funk, with a slight vinegar edge and mild green vegetable bitterness, but yeah there's really not a lot to this beer. A fair malt backbone, little finish, only a slight rise in the middle.

Mouthfeel is decent, feels foamy in the mouth and goes down well enough.

This would be light and drinkable but it's just not interesting enough. Has the flavours of a Kilkenny, but less smooth and far more bland. I need something more interesting for it to be 'drinkable'.

A - Poured a cloudy dark red/copper colour with a centimetre or so or off white head that falls away very quickly.
S - Toffee maltiness & fruity esters.
T - Sweet toffee also in the taste, a bit toasty. Some fruity esters also.
M - Medium bodied, a moderate carbonation level with a sweetish finish.
D - Haven't had many in this style but this seems to be a reasonable attempt. Worth a try.

Pours copper with a fading off-white head.
Nose shows some darker caramelised malt and faint spicy and earthy hops.
Toasty and nutty malt flavours are present, with some grapes in there too. Unfortunately there's a cidery note in which is quite distracting.
Body is very watery, especially for a darker beer.

Sweet, malty and a big dull. Quite fruity with a sickly sweetness. Mild mineral character. This needs to be drier.

A fair attempt at the style but with too much residual sweetness.

This pours a dark red/copper colour. Very murky. A couple of centimetres of head with good retention and some lacing.

Similar on the palate with some good toasty notes as well.

I think the sweetness might get a bit cloying after a few but nice to sip one or two at the end of the night or perhaps with a meal.

I find with Red Ales they struggle for a great 'beer' appearance...yep its colour is beautiful, full & red, soft carbonation, but where's the decent head...not here!!!

Sweet in aroma, with some fruits...definate wine characteristics.

Mouthfeel was pleasant enough, the carbonation was a little fuller than it looked, but fine enough.

This is a nice sipper...as it warmed it did get a little tastier, however not sure how many I could have in a row. Repertoir drinkers who enjoy the variety could include without a prob.

Good aussie attempt at an Irish Red Ale, & has some winery feel to it too.

Bottle from a shop in Apollo Bay. From notes.

A - Rusty copper pour. Bright. Good carbonation, film of light brown head leaving no lace and a film of retention.

S - Sweet malt and caramel. Not exciting, but fairly nice.

M - Carbonation seemed quite strong for the style. Medium body, some sweetness and dryness in the finish.

O/D - Too carbonated, otherwise a decent red ale. Nothing to rave about but certainly enjoyable and nothing really of note worth knocking too hard.

Pours a dark mahogany hue with a fluffy two finger head and a rim of lacing,the smell is dried fruits,alcohol,cherries and also a slight nuttiness,the mouthfeel is lighter than hoped for its light bodied with moderate carbonation and has tastes of dried fruits,cherries,roasted nuts,toffee and finished with a dry nuttiness and overall it's average and was hoping for way more out of a style rarely produced on these shores cheers.

A: Pours a hazy red color with a big frothy head that fades to no real lacing.

S: Aroma of fruit, some caramel sweetness and bit of grain.

T: Taste of fruit, a bit too sweet, some malt sweetness and grain. Has an odd bitterness, probably from the fruit and a lingering fruit aftertaste.

O: No a beer I would seek out as it is too sweet to enjoy.

Aromas are all at sea. Brown sugar, cherries.

Taste is very sweet and brown sugar driven. An artificial candy chocolate like taste is also present - reminds me of childhood taste but cannot pin it. Ends up sweet and cloying.

Oops - not a great beer at all... Might handle style better if on nitro...

A - Pours a brownish, red colour with an off white head that retains fairly well

T - Get lots of toffee , nuttiness, caramel, sweet candy but a little dry and bitter at the finish

A - pours a reddish amber with no head or lace.

O - definitely a step up from the macros but nothing standing out here.

I remember having a Prickly Moses blueberry Hefeweizen that was quite good. Actually wish I knew where I could get more of that. Alas I only have the Red Ale at hand, we'll see if it fares as well as its blueberry cousin.

A: Pours more of a clear brown than a red, with a light half centimetre white head. Nothing like a "red sunset" as the label proclaims and someone needs to get their eyes checked.

S: Aroma is chocolate with a raspberry cream centre, which sounds appealing for a sweet dessert treat, not so much for a beer. Also detecting hints of Turkish delight, again delightful for candy, blah blah blah, etc. Expecting some bold sugar rush with this ale.

T: The flavour is better than expected, not by much but it is definitely drinkable. Tastes of aforementioned chocolate, roasted barley malt, earthy hops, vegetable matter with a more dry than bitter finish. The after taste is a bit dirty, as in a mouthful of dirt was consumed, which detracts from it overall.

M: Mid to light body, borders on watery, with a light carbonation.

D: I would give this a pass; it's funky in the wrong ways, overpriced for what you get and a little bit bland overall, but that blandness is actually a good thing because I'm not liking the flavour profile and the last thing it needs is ramping-up.

Food match: Maybe pub food like steak and chips with aioli, nothing too complex with this brew.

Appearance: deep amber with a red tinge. A limited but creamy head. Looks okay, but I suppose a bit every day.

Aroma: quite subtle, but what's there is a bit cloying - too strong on the malts.

Taste: the flavour follows on fairly closely - fairly simple, but still quite ordinary without the light spice flavours that seem to be attempting to come through. Not a good red ale.

Aftertaste: finally a bit of bitterness comes through in the aftertaste. Doesn't make up for the disappointingly ordinary taste.

Mouth feel: fairly low in carbonation, with a smooth flow. Not bad at all, and suits the style at least.

Overall: Not much going on. An odd but ultimately awkward mixture of flavours. And at NZ$70.80 a case (2012) - without export costs, expect around $90 a case or more. Not really worth it. Get something better.

I had a 330ml bottle.
Appearance: pours as light brown copper colour, perhaps not as red as the name would suggest. About 1cm off-white head.
Aroma: not too strong but there is malty and nutty aromas coming through. Slightly walnut to me.
Flavour: considering where this started I was quite impressed. The flavour is incredibly complex. The beer is smooth with nutty like characters and some blue cheese flavour present. Mouth feel is medium and slightly creamy. It is not a bitter beers and therefore has a very smooth finish. Very impressed by the flavour of this as it was completely unexpected.
Overall: this was a great beer, good colouring and flavour that the aroma and appearance upfront did not give away!