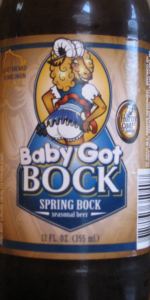 From notes 6/25/13: Pours a clear amber producing less than a finger of off-white, variously bubbled, sort-lived head that leaves little streaks and motes of lace (a subsequent bottle produced 1.5 fingers of beautiful, finely bubbled foam that ligered for a respectable amount of time, leaving a nice webby lace). Aroma is almost a non event. Toffee is the dominant essence with a little roasted malt, caramel and even more faint vanilla and dark fruit. Taste is a different matter altogether and redeems this brew from the mediocre pile, bringing notes of deep malty caramel and toffee with a vanilla hint and a little hoppy character that provides a nice balance. A peppery spice and a bit of chocolate emerge in the finish. The aftertaste is bitter burnt maltiness. Mouthfeel is medium bodied with moderate peppery carbonation yet is creamy and smooth.

Nice Bock.
Saw this in the package store, chuckled as I put it in the cart.
Nice smooth drink. Minimal head, citrus notes little to no after taste.
Definately one to keep on hand.

Aroma is pale malts, nuttiness and hints of bread. The flavor is pale malts, bread, mild sweetness, fruit, a hint of citrus hops and a mildly spicy/a hint of heat/alcohol in the finish.

I am not a huge purchaser of bottled beers, but a) I like puns and b) I have a soft spot for this brewery's beers since they tend to be reasonable in both price and taste. I had a friend in Oxnard, CA in the mid-1990's who (kind of) referred to herself this way, making it even more appealing.

Is the goat in drag on the label? First, it is wearing bighorn sheep (ram)'s horns, plus even if it were a goat, the females do not sport horns. From the bottle: "Craft Brewed in Wisconsin".

I went with a heavy hand on my pour and although it was not really my intent, I got a pseudo-cascade all the same. Settling, I was left with a massive there-plus fingers of dense, creamy, tawny head with great retention. Color was a deep-amber, bordering on copper (SRM = &gt; 17, &lt; 22) with NE-quality clarity. Nose was rich and malty, kind of caramel, very sweet. Mouthfeel was thin-to-medium and the taste was very much like liquid caramel! Wow. I usually disdain sweet beers, but such the style for this beer, plus it was not cloying. That is to say, there was the inherent sweetness, but it did not linger, like a more syrupy beer might. Instead, the finish evinced an alcohol heat which rendered it semi-dry as a whole. Not bad, and at the price point, worth at least a try.

12oz bottle. Poured out a clear, golden amber color with a small, off-white head of foam. It smelled of caramel, bread crust and floral notes. Tasted of sweet caramel, toffee and a mild bitterness.

This beer is a semi-clear dark amber color. A tan colored head recedes rapidly to hardly anything but a ring around the glass. Only a few spots of lacing ever emerge.

The aroma is fairly transparent, only slight buttery toffee or sweet malts come out, and it's very subtle.

The taste is held up by a malty backbone for sure. There is a slight woodsy note mixed with some bready malts and buttery sweetness, but just barely.
Just a touch of alcohol comes through as well.

The mouthfeel is medium to heavy.

Overall, just couldn't find anything over a 3 in the rating category here, but I'll still finish the six pack.

Baby Got Bock is a real nice name. The label is creative and inviting. It looks okay and there was nothing on the nose to indicate the assault I was about to be the subject of. I took a sip, and said, not bad.... woah, what the heck was that. I winced with a strong, strange, tart sour flavor. Surely I had been mistaken. So I took another half-ounce swallow. I was not mistaken, my throat muscles tensed up, I crinkled my nose and my head shook. I promptly took the ale glass to the powder room sink and poured it down without reservations. In conclusion, this offering from Horny Goat satisfies just as well as the others I have sampled. Sorry to say, as I really dislike being negative. But truthfulness reigns.

This is actually a very good bock. Surprise there, because this brewery is variable - some good some just OK. This is good.

It is good in all categories, especially appearance and aroma. For the style, it is exceptional in those categories. The taste is also uniquely good - sweet and malty with lots going on.

The aftertaste is also quite good. Overall this exceeds expectations and if I were looking for a good bock to read this would be a recommended author!

12oz bottle poured into a snifter.

A: Pours a clear golden amber with a 1 finger white head. A decent amount of carbonation visible in the body. Head fizzles away to a thin ring in a few minutes.

S: Sweet malt with hints of raisin and fig. Almost a cherry or apple aroma as well.

T: Has a semi-dark fruit flavor with a slight roasty malt. Some bitterness in the backend. Just tastes a little off.

Overall feels like it falls a little short of the goal. Best part is the brewery and name.

12 oz bottle poured at cellar temp into a snifter,

The beer pours a bright clear gold to copper hue with fizzy bleached white head foaming up 1 cm and fading to a thin edge layer in a rapid fashion.
Aroma is grainy, caramel malt with some general sweetness and hints of spicy hops mixed in the background.
First sip reveals a slightly sticky textured brew with average body. Carbonation is mild and rolls across the palate easily on each sip.
Flavor is malty and fairly sweet witch caramel dominating I also get some spicy hops on the finish that linger a bit and dry out the palate.
No hint of ABV on bottle or in the sampling. A decent brew that is sweet but not cloying. Very easy to drink and enjoyable.

Picked this up in Cudahy, WI at Pick-N-Save. It's a twist-off, has a pretty solid carbonation.

A- clear golden hue, about a finger's worth of head that goes away pretty quickly.

S- sweetness from malt dominates the aroma. Not a strong-point but not bad. Honey, mixed with something bitter but not floral.

T- On the sweeter side of traditional bocks. Well balanced. Would have been a 5 if it was a little punchier on the aftertase. Last year's batch wasn't as flavorful.

M- very drinkable and smooth! Carbonation is a big plus, and it coats the mouth as promised by its description.

Overall, this is a big improvement over last year's batch of Baby Got Bock. I live near Milwaukee and talked to the Brewmaster who said they reformulated this beer. Haven't had it on draft yet but I will definitely look for it.

Pours a very clear light brown color. Kind of an odd color with very little carbonation and almost no head. What head there was disappeared in moments.
Smell does not have much going on with it at all.
Taste completely through me for a loop. With not much of a look and no smell, I was surprised to have so much taste! A lot of really strong caramel and toffee tastes to this bock. A bit of hops gives it balance and even a bit of a ginger taste.
Mouthfeel has a nice thickness to it. Very good thickness for a bock and very smooth too.
Drinkability is very nice on this beer. A normally do not like bocks very much at all. Horny Goat's offering has very strong tastes to it and a lot going on. I really like this offering and would definitely seek out this one again.

12 oz twist off bottle as part of a sampler pack, poured into a pint glass.

T: Very strange here too. Bock? No. A little sour apples, honey, corn, unripe melon. This is not good.

Appearance: pours a orange color with a one inch head that slowly falls to a spotty surface foam.

Smell: caramel and some fruit sweetness rise from the glass.

Taste: nice malty base with caramel, ripe apples, earthy tones, and some grassiness. Bitterness is moderate.

Overall: not an overly exciting bock, but it hits the spot when you want a malty beer.

S - not much on the nose; faint malty scent with a hint of sweet caramel; very faint hint of grass

O - This is not the best bock you'll ever have, but it's not bad. I would buy another sixer.

Since I am adding this and was unsure, I asked the brewer, this is his response:

In regards to your question about Baby Got Bock, our bock is a traditional Bock, not a Maibock. Baby Got Bock has a sweet malty finish with low aroma hops. Maibocks tend to be heavily hopped and pale. I hope this answers your question.


Clear, darker-gold colored brew. Fair amount of rising carb bubbles, small but durable white head. Scent is mainly sweet lagered malts, just a hint of hops. Taste is alright, I'm getting some green-bottle notes from it however. Focus is on the malt, some grass, a touch of bitter hops. Pretty soft mouth, medium to full. Overall not bad, but whether its intentional or not, the green-bottle taste (and its not sold in a green bottle, but you know what im talking about) takes it down a notch.