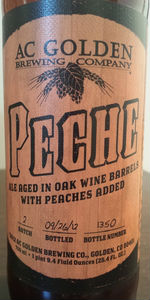 2011 cork and caged bottle. No label. Served in a stemmed glass.

Pours a lighter peach coloured body, two finger white head, good retention, nice lacing. Lighter than the apricot version, I believe. Smells of rich peach skin, tart lactic acidity, a bit of oak and mild funk, no rubberiness like in the apricot one (which I associate with the apricot skins, specifically). A bit of peach juice as well. Flavour is big underripe peach, moderate lactic acidity, oak, bit of dusty funk but not particularly leathery or musty; I felt this was a better balance with more of the fruit showing compared to Fuzzy b2. Mouthfeel is medium-lighter bodied, crisp, dry and refreshingly fruity. This was a great batch and I thought this did well with time as it outpaced a fresh Fuzzy in terms of the balance of fruit and complexity.

Thrown in as an extra from a generous trader. This was the Casey batch.

Pours a light golden color, smells of oak and funk and muted peaches.

The taste is very sour with a strong peach flavor on the finish.

Overall, this beer tastes like a less refined version of Casey's current offerings.

i really dig these beers, and the peach one is very very solid, a lot less sour than i remember others being, especially the apricot. its got a lot going for it, starting with real authentic peach flavor. its summery and ripe and juicy, without being sugary or overbearing. i like that its more of an accent thing, maybe stronger than an accent, but this is still very good lambic type beer first. lots of lactic pucker on the nose, white wine notes, mellowing oak, even hints of tangerine in here. the flavor matches the nose, with the peach being right up front. i am surprised this beer isnt getting more love from the hoards of new wave sourheads, this beer is fantastic. mature too, bone dry and carbonated like a soda pop. it has all the nuance of something like this out of belgium, more than just lactic sourness it packs some musty funk too, i wonder how long this was in the barrel for. its a little easier drinking than others in the series, lighter somehow, and if it wasnt so expensive, i would grab a few more bottles. it really comes to life when it warms up, even a little bit, so drink patiently!

Super yummy - beautiful golden color, head dissipates quickly. Nice sour bite and finishes with a sweet, peachy aftertaste. Of the sour apricot/peach beers I have had (Cascade Apricot and Almanac Brandy Barrel Peche), this is by far the most fruit forward. Really well done.

Received as an extra in a trade, poured into a Kate the Great tulip shared with JLindros.

A - Poured a crystal clear light straw hue with a thin head that faded to leave nothing.

M -Mouthfeel is nice and crisp.

Cloudy with a golden color and pinkish hue. Poured from a 22oz bomber shared with two friends. No lace and the head dissipates. Fairly good sour smell, acidity and tart. Taste is similar, with a bit of the peaches shining through. Not as complex and for $22, hard to justify buying again. Nonetheless, excellent tartness and fruit flavor.

Taste - White wine is even stronger. Overwhelms the peach, but it's still faintly there. Grain.

Pours a murky orange with a foamy beige head that settles to wisps of film on top of the beer. Small streaks of lace form around the glass on the drink down. Smell is sour and tart with malt, peach, and acidic aromas. Taste is much the same with malt and peach flavors on the finish. There is a mild amount of acidity on the palate with each sip. This beer has a lower level of carbonation with a slightly crisp and medium bodied mouthfeel. Overall, this is a pretty good beer with a solid peach presence that is slightly better in the aroma.

Bottle courtesy of forgetfu. Served in a mini snifter. Pours a hazy light golden-straw color with a short white head and a light bit of lacing. The nose carries a touch of peach and a bit of acidity. Not much depth, and not quite as nice as the Apricot. Flavor has a very mild malt presence plus some peach and a bit of accompanying pit. Light body and a touch of acidity. Okay and without flaws, but not nearly as good as the Apricot.

Hazy, yellow/gold. Not a lot of carbonation. Especially as you work your way down, it pretty much goes dead flat.
The nose is a nice sour mix of slightly funky brett yeast, sourness (tart green apple, citrus), and a little bit of peachy flavor.
Slightly sour on the front of the palate, fruity in the middle, with a pronounced brett character in the finish. Not harsh, just apparent.
The peach doesn't really come out much until it totally warms up, but even then, it's mild. Still, it's tasty even with only a mild note.
For a warm day, this is a nice tart quencher...however at the current price and availability, you really could never treat it as such.
Not as good as the fromboise, but still tasty. I think I prefer it to the apricot, even if it is less fruity and carbonated.
The guys at AC Golden know both their German lagers and wild ales rather well. Not too much coming out of there that I don't like.

A: Poured from a bomber into a couple of tulip glasses. Hazy yellow with a tinge of orange. A very thin head that disappears quickly, leaving only a ring around the edge. I'm refreshed already.

T: Tart and peachy, but not overwhelming at all. Wow, this is very good.

M: Smooth, with medium carbonation that lends itself well to this style.

O: Very impressed with this sour. I would drink this stuff all the time if it were readily available. A much better beer than the Apricot.

Smell: muted peach with touches of oak and lactic acid

Taste: the peach was a bit muted, with some oak and acetic sourness. Could use a bit of funk

Overall - good offering, I found the apricot one vastly superior.

Much better than the kriek to me, smoother, better fruit content, and more flavor forward. A nice beer and I'd have more of this for sure.

Shared by forgetfu. Thanks Bill.