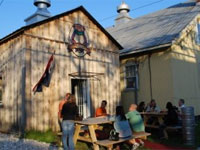 On vacation.
Visted the town, hit the brewery.
VIbe is great. Your there to drink the beer and hang. That makes it good.
Talked to the brewmaster about what craft beer I have had.
Yes "geeked out" talking beer in a brewery, go figure.............

Bough my stash, shook his hand, and now posting how anyone who hits St. Michaels in MD should stop by.

And that's my review.
Djkman

Jay and Ace are great. Both very knowledgeable and personable. The place will be hopping when there is live music, but most of the time it is slow enough that they have time to just hang around and chat. Very passionate about their beer. The brewmaster Zach really knows his stuff as well. They normally have anywhere from 6-8 beers on draft, and occasionally a cask. Their beers seem to get better and better every time I visit. They are getting ready to start experimenting with some barrel aging as well. Dog/pet friendly too!

Small and cozy place but they have a modest selection of fantastic beers. When in St. Michaels this brewery is a must visit when checking out the many great small businesses in the area!

We were traveling through here for the Thanksgiving weekend to the nautical museum in town and noticed there was a brewery along the main street and a winery next door to it too. After we left the Crab Claw restaurant, we decided to check it out.

They had just recently expanded, so don't know how the place was originally setup and the outside area was not open for drinking either. Bar is to the left with about ten seats, soft couched and antique chairs, coffee tables, high tops, and high tables for the standing groups. Nice old mill/ barn floor with framed pictures and some mounted animals in the walls.

The quality of the beers were good considering they only had three to offer at the time. They had an amber, IPA and dunkelweizen. We got a flight to figure out what we wanted for a pint and a growler to take back to share with everybody else. The cool thing is that they filled up non branded growlers or growlers from other breweries too that only cost $12 for the fill. Our bartender was right on amongst the decent sized crowd and did a good job of our growler fill and explanation of the three styles. Another cool thing was their three 15bbl fermenters you see on your way back to the bathroom and each one had beer bubbling away too.

Overall, they even have water and soda for non beer drinkers and they ate kid friendly too. Pretty cool find in MD this past week and happy to see the bridge connected St. Michaels to the rest of the world.

I know this brewery has gotten a lot of bad press and in my opinion pretty much deservedly so. I have had 3 of their beers, the porter being the best and it was not all that. The retailers I speak to say the beer just does not move once it is in the store and folks try it. All that being said this weekend while in St. Michaels I figured I might as well go to the source. Hell they have been there for about 4 years now right so someone must like them...

Nice sized, L shaped tasting room with bar seating for perhaps 14. Some nice comfy couches and chairs, a few high tables as well. Several animal heads-I assume for the whole Eastern Shore-hunting motif. No waterfowl oddly enough. Was not outside in the patio area. Nice sized crowd too-maybe 20 people inside.

Service was very attentive and even though my glass was half full I was asked several times if I needed anything else-that's always a good sign in my book.

Only 3 beers going today-a hefe, amber and a Belgian Golden. Had a smapler flite of the 3. The hefe was quite good. Amber somewhat "eh" with a lingering bitterness that didnt belong and the Belgian was tasty enough. Had a pint of the last. While not "solid" beers they are were decent enough to make the stop worth while in my book. I tend to think that a hefe and the belgian are going to hide any major flaws with their yeast's characteristics, but they were enjoyable enough don't get me wrong.

All told I had 3 samples, a pint and my wife had a soda, 12 bucks. Honestly I would go here again. Nice to have a local brew when in town, I am sure the taps rotate, and the atmosphere was very friendly. A few kids inside too which is always cool.

No food served here fyi. Next door to a winery in case you feel the need to double down!


Eastern Shore Brewing in Saint Michaels, MD
Brewery rating: 3.53 out of 5 with 185 ratings