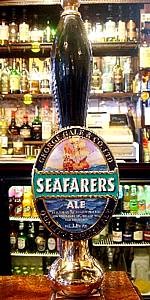 On tap at The Butchers Hook and Cleaver in London.

Straw coloured, clear, with a patchy cap and no lacing.

Faintest lemongrass smell (may have imagined it though).

Mouthfeel is thin with some washing-up liquid and faint carbonation.

Overall, a light, easy drinking ale. A bit like drinking a pint of air

Pours a thin head on a clear dark straw body.
The aroma is wet grains and lemon.
The taste is mild lemon bitter and malty.
The texture is softer.
It's fine enough.

Poor form of the art of brewing. Almost tasteless.

Seafarers has a golden colour and glistening amber hue. It can't really be considered either dark or light. Despite its deep tone the clarity is perfect and its head, which sits atop the beer like a clump of mashed potatoes, is smooth and steady - looks like smooth sailing tonight!

Fireworks are as unlikely to find in a traditional English Bitter as they are at a funeral; these ales are intended for everyday consumption which, by definition, means that there's nothing characteristically all that special about them. The Brits customarily brew a simple, straight-forward ale; the most distinguishing factor is often the mildness.

Seafarer follows in this tradition and doesn't have a tremendous flavour profile by any means. Still, what's there is nothing if not pleasant: biscuity and toffee-laced malts, dried fruit esters, a brisk rash of herbal hoppiness. It has an agreeableness that matches that of its alcohol content (3.6%).

The recipe features a prominent fruitiness that is partially attributed to its malts and partly the ale yeast esters. It is most appreciable in the aroma which has distinct notes of plum, apple, raisin, and apricot (both dried and fresh). These fruity flavours compliment the faintly floral, herbal qualities of the hops. There's nothing especially overt, but all the flavours come together nicely.

For me, my enjoyment of certain styles can be contingent on certain factors (i..e, whether it's fresh, whether I'm in the particular mood for it, what time of year it is, etc) and, in my experience, English Bitters seem best in social settings where copious consumption is a likely possibility. What I mean to say is that one pint of Seafarer isn't as satisfying as two (or more).

On-tap at Beer Bistro in Toronto.

The classic English Bitter flavor. Minerals, a touch of salt. Flavor is a mouthfilling, warm, browned biscuit malt with a tart finish. Ends on a bitter note. A little dark roast flavor, something brambly, with a touch of fruit. Very pleasant and drinkable.

From the handpump at the Swan Hotel on the Thames in Staines, Surrey, for my birthday, a beautiful clear evening and first night in Europe.

Hand pulled pint taken at the lovely 'Faltering Fullback' in North London: UK pint sleeve glass, unmarked. The beer was a pale copper colour, clear and bright. The head a good showing of off-white bubbles which settled and stayed. A lot better looking than the bottled version I reviewed some years back.

Good healthy aroma of hops and malts, no overpowering smell, just enough to let you know it's a beer in your hand.

Very easy to drink, I had three pints and wanted more, but the wife needed food. A really good blend of flavours, like the nose nothing powerful, just a subdued pleasantness all round.

The brew is clear light amber, has an off-white firm head with some lacing.

The smell is typically pears, nuts and some hay.

The taste starts with brown bread, then some pear and lemon marmalade, and a sprout of lemon zest.

Light carbonation, a freash feeling, a small body and a dry finish.

On cask at The Old Mitre, London.

Very much a bitter pint of bitter, but aroma hops are hidden. Some tart notes. Too much wood.

Grainier than expected, would like a bit more umph from the malt here. Hops lend a refreshing citrus character to the finish, which ends quite abruptly.

Went down a bit thin, carbonation just a touch too restrained.

I had the new version from Fullers at 3.8% ABV.

The colour is copper/amber, the liquid is clear. The finger thick head is pale beige (the ale is apparently served "northern style").

The smell is light, some tobacco and English hops.

The first taste is yeasty. It develops with some sweet flavours, quite a lot of citric hops and a touch of beef stock. The taste is as balanced as one could expect from this style. Hints of dough in the aftertaste, a gentle Goldings-style bitterness and some sweetness in the finish.

The carbonation is light; the few bubbles are large and fresh. The liquid is semi-smooth.

A fine example of the English bitter style: Not bad at all, although it borders to being a bit weak.

Tasted this beer by half-pint at the Basketmakers in Brighton on 24/06/06. Everytime I went back to this fantastic Gale's pub, they happened to have a seasonal beer alongside their regular range of brews: Butser, GB, HSB, Festival Mild... And this special one is said to be brewed partly for charity purpose, donating 5 pence out of each pint to... (well, I forgot which maritime association).

Appearance: it pours a bright, dark amber or orange copper hue, on top of it is a very thin, off-white beerhead, with very low carbonation.
Smell: at first it's light pale-malty, while gradually revealing is a refreshing, hay-like hoppy note and slightly citrusy zesty bitter aroma.
Taste: on the palate, it's simply hoppy--slightly tart fruity, on top of a freshly-cut hay's grassy flavour; the finish is crisply dry, with a tangy kickback of zesty hops, while in the aftertaste I sense a residual acidic feel on the palate which I don't quite like.
Mouthfeel & Drinkability: overall the mouthfeel is lively, though it tends to turn flat bit by bit, perhaps due to its lack of freshness or for any other reason I can't specify. The body is light, as is the flavour. On the balance it reminds me of Gale's GB, but the latter, to my best recollection, is more pleasantly hoppy, dry, and has a more pronounced flavour than this special brew. This beer is just an average bitter for me.


Seafarers from George Gale & Company Ltd
Beer rating: 80 out of 100 with 31 ratings