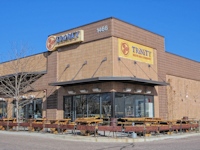 Notes: 6 of their own brews on-tap, plus 25 guest taps.
BEER STATS

Lively little brewpub on the corner of small strip shopping center on the west side of town. Open airy room with L-shaped bar perpendicular to the entrance that seat about 15, another 8 tables about the room, and sidewalk patio seating out front. 30 plus beers on tap, the 3 I had were very nice. Also had the Philly cheese steak sandwich which was very nice.

My father in law's go to spot. The beer is solid, a very nice collection of in house cellar's and decent food. A great spot if the weather is nice to chill on the patio.

The beer selection was good!! And if you get a change to sit outside you can see the mountains in the distance which is cool if you are from outside the west. The food and service was marginal.

It is a real shame that the quality of service impacts the experience so much. It is really hit or miss and much more of a miss to be there when they are either way understaffed for the amount of people there, or the staff is so checked out they can't be bothered by you. Beer is good, Food is good (kitchen staff gets props for operating in such a tiny space.) But servers .. I been twice and had excellent service and a great time.. and 4 times where they could have cared less that we were there. The Springs has excellent other options (Cereberus, Nano108, Gold Camp) for example to put up with their attitude.

Decent vibe here and a comfortable place to meet. Noise level is high enough where you don't feel like you have to whisper, but it isn't too loud either. Great quality beers. Many barrel aged beers (saisons and sours for the most part). Many cellared bottles that can be purchased. 6 hour beers. Many other barrel aged and specialty beers. Decent selection of guest beers. Food is decent. Seems pricey, but some selections are higher end ingredients.

Ordered a pre-determined flight of eight very pleasing 4oz glasses of house brews, cheese included. What's not to love? There were several brews on the menu we wanted to try that were unfortunately out, but in place our bomb ass bartender hooked us up with the special release of the day. Chill place, if I lived in town I could see myself frequenting a bar stool.

Really nice bartender. She was real responsive. Went there when it was slow

The corner store in a strip mall, right next to a Jersey Mike's. Very easy to overlook from the main road.

Instead, the decor is western hippy crunchy, but that's absolutely par for the course in Colorado and it doesn't come across at all as fake or pretentious. I visited around noon on a Thursday and there was a pretty decent sized crowd made up entirely of white businessmen. The area is comfy and brightly lit and trip hop and chill wave played continually at an unobstrusive volume.

So, basically, while the vibe ain't my regular scene, there was very little about it that was objectionable.

The food is high-end for middlebrow. I got a meat and cheese plate and was very happy with my decision, although it was nothing that I couldn't have gotten in lots of other places.

They have about 10-15 house drafts available, along with another 10 or so high-quality guest drafts.

The beer was quite good. They specialize in saisons, which is usually a bit of a turn off (Foundation used to do that, until they decided they wanted to make money). Unlike the vast majority of American brewers, however, they do saisons quite well. And it's not just that the beers are gimmicky and overloaded with sour bacteria, either: their One Ear is as straightforward as a saison can get, and it was immaculate.

It's hard to call a place a "must visit" in an area as beer rich as Colorado. The Springs alone has several more highly recommended breweries that I didn't have the time to visit. So, from the perspective of an absolute tourist, all I can say is that I was really impressed.

Trinity has quality beers, but they are expensive and have awful service. Awful service pops up on several reviews, and I am very surprised that they are completely oblivious to it. I have had sporadic visits to Trinity over 6 years, and without fail, every visit has me waiting a really long time to be served my first drink and my drink stays empty for quite some time before being refilled. I was finally motivated to write this review after I went there to fill a growler this weekend. Great Storm was closed, otherwise, I would have been there. Anyway, I came in and went directly to the bar. There were 4-5 other people sitting at the bar. There were at least 4 employees milling around the bar, but I can't say if they were all responsible for the bar. I stood there for 10 minutes waiting for anyone to acknowledge my presence with an empty growler clearly sitting in front of me on the bar. It was very evident what exactly it was I needed. I shouldn't have waited around so long, but I did because I knew it was finally time to write some reviews.

They were also out of the first in-house beer I ordered, but I know that happens occasionally.

WAy overpriced. I understand the plan for having the beer for the glass that it is to be served in ,but the prices are way to eratic. save your money.

Service has always been terrible. Their guest selection has gone down hill due to Jason's falling out with Elite Brands. Jason also has damaged his brand by stating that the locals don't know jack about beer. Colorado Springs didn't rate his beer as he expected so he threatened to move to Denver due to it. He's a world class egomaniac.

Very fun vibe in this place. Foods a little pricey for what you get, but they make up for that with the exceptional guest tap list and there own taps they have. For quality of beer its very well could be the best brewery in C.S
4.5/5
O.B.D91

Walking in wasn't sure what to expect as my first indication was that this wasn't my type of vibe (seemed less casual than other taprooms). Then as I examined the tap list a server walked up and spent time with me trying to figure out what to drink first.

I had 3 different servers come up to me to make sure I was being taken care of and each of them gave advice on what beer to try next. I wish service was like this at every brewery I walk into.

Beer selection ranged from sours to ipas to stouts, my favorite was the Sour Threads.

Trinity Brewing Company in Colorado Springs, CO
Brewery rating: 3.73 out of 5 with 1455 ratings