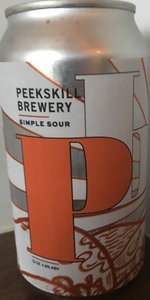 4.03/5  rDev +3.3%
look: 3.75 | smell: 3.75 | taste: 4.25 | feel: 4 | overall: 4
On draught at Gramercy Tavern, NYC. A beautifully restrained farmhouse-style sour ale. More than tart but not quite mouth-puckering. Body is light and clean with soft carbonation. The finish is short but refreshingly sharp. An excellent accompaniment to food where the acidity cuts through duck fat and butter and cleanses the palate. Highly enjoyable. So much so, I had three… along with my roast oysters and duck meatloaf.
Feb 06, 2022

The nose opens up with a touch of funk, evoking rustic notes of horse blanket. This is contrasted by the sweet aromas of wheat, bready malt and corn adjuncts. There are also tart aromas of lemon and lime, and a hint of floral hops.

The brett flavors produce a tartness that is assertive, yet not too acidic. Overall, the taste is redolent of an unsweetened lemonade, along with notes of lime, wheat, peppery hops and rustic dryness. Light and refreshing with a rather smooth mouthfeel despite the acidity. The carbonation is moderate and the finish is dry and tart with lemony notes.

Despite the tartness of this beer, it is not too mouth puckering and quite accessible. I enjoyed its relative simplicity, as the name implies.

3/5  rDev -23.1%
look: 3.5 | smell: 2.75 | taste: 3 | feel: 3.25 | overall: 3
Decanted from a 12 oz (355 ml) can into a conical pint glass; canned 5/11/18.
A: Pours a cloudy, lemon yellow with little or no head or lacing, and only a thin, white rim.
S: Savory aroma predominates, consistent with diacetyl, although a subtle lemoniness is appreciable.
T: Lightly tart for a sour. Light lemon, but funkiness predominates, verging on overpowering other flavors. Definitely a buttery flavor that cannot be denied. No appreciable lactic acid flavor or bitterness.
M: Light bodied and moderately to well carbonated.
O: Have tried this twice. Odd set of aroma and flavor characteristics for a sour. Simply did not do it for me. Drinkable, but just barely. Wound up blending it with sweetened fruit juice and that did not even really help.

HEAD: None. No lacing.

Sourness is light/weak, coming in at about a 2/10 in terms of intensity.

It's a weak aroma, almost suggesting a watery brew.

I detect no overt alcohol or off-notes.

TASTE: Lemonade-esque, with a watery sugary taste, mild tartness, and disappointingly restrained sourness (maybe a 2/10 in terms of intensity). The fresh what malt base is nice, but ultimately this is a painfully shallow (and true to its title, simple) brew, replete with hints of cider that may signal some off-flavour or even the use of cane sugar.

No overt alcohol or overt off-flavour comes through.

TEXTURE: Smooth, wet, as light-bodied as a beer can possibly be, watery, and well-carbonated. Thin and weak, lacking much of a presence on the palate.

This mouthfeel doesn't elevate the beer as a whole. Should feel more puckering and acidic.

OVERALL: A drinkable Berliner weisse with ill-enough tartness, sourness, or twang. I wouldn't bother with this again, but one could do worse.

Nov 04, 2016
Rated: 4 by TheBeerdedCharmer from Pennsylvania

Reviewed by TheElectricOne from Rhode Island

Appearance: pours a pretty, hazy straw-yellow, with minimal white head. Super sudsy and carbonated, just looking at it. Lots of little bubbles clinging to the edges of the glass.

Aroma: lightly puckering, but overall mild for a sour. Some funkiness, but mostly tart lemony scent.

Taste: it's a pretty basic sour, as evidenced by the name, but it's really solid in its representation of the style. Light, with a fair amount of tartness and lactic acid. Lemony sourness, but not overly puckering or anything. A sour for those new to sours, but it was a welcome relief to see at a Whole Foods.

Feel: less carbonated than many sours I've had, but it still stood up pretty well to the flavors. Slightly, slightly sticky.

Overall: this "Simple sour," is very simple, but solid nonetheless.

Rated by dallas-beer-guy-12 from Texas

Watery, not that tart.