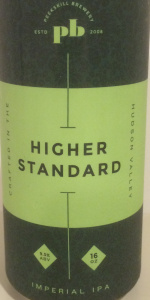 Notes: With Simcoe and Citra Hops added to our kettle, coolship, hopback, and then dryhopped twice in the fermenter, this smooth Triple IPA will satisfy your inner hophead.
View: More Beers | Place Reviews
Recent ratings and reviews. | Log in to view more ratings + sorting options.

Reviewed by Scarpariello from New York

4.28/5  rDev -1.2%
look: 4 | smell: 4 | taste: 4.5 | feel: 4.25 | overall: 4.25
16 once can poured into insulated henkels beer glass. Got a 4 pack at Uncle Giuseppe's marketplace in Yorktown. My mainstays are the wrench derivatives and wanted to see how this compared. Poured opaque yet not hazy golden orange. Very little head or lacing. Strong pine taste which appeals to me with citrus and apricot fruit. More malty and bready than many newer NEIPAs resulting in a smoother finish. Easy to drink belying the high alcohol content. I prefer a little more sting in the finish for NEIPAs but this is a nice change of pace. With respect to comparison's to the wrench line, I would put it a bit behind Impact Wrench which is just too delicious to me.
Feb 03, 2021
Rated: 4.11 by ER527 from New York

The date on the bottom of the can read 7/26 of last year with "PACE YOURSELF" written below that. With a strong amount of booze here, that was pretty easy although it was quite recessed outside of the overall warming sensation that I felt once I finished this off. Nice, deep golden pour to this with a bit of fine sediment floating in it with plenty of sufficient head to keep pace with the liquid below it. Very little lacing was left behind and the aroma wasn't terribly strong either as a moderate pine, white cheese, and resin tone were present, although quite faintly. The taste was where this beer shone, as all of those were combined with the Simcoe, a subdued but steady earthy dankness, mild tropical pith, and mild citrus pith. Plenty of malt was here though it felt like bread and and underlying but unifying and addicting earthiness was what made this beer shine while tying everything in together at the same time. Mild solvent and booze combined with a dry mouthfeel and moderate amount of carbonation allowed for the dank and resinous notes to emerge, even if they were quite murky!

While not a weak beer, this never felt too strong and only when I finished this off did I feel the buzz kick in. That was soft and so was the impact of this offering. While not the best or most accessible example of this style that I've had, this was a hell of an effort my Peekskill that would please nearly any hophead out there. A solid first impression that left a bright, lemon slickness behind as the dankness grabbed hold of me. Worth a wider range of distribution, as evidence that New York's 57 counties outside of "the city" were fully capable of brewing world-class beers. Truly, this was a higher standard than most!

Aroma is resiny and pine that ends in a citrus punch.

Taste is dangerously smooth for a 9.5% alcohol beer. Underlying malt sweetness but with a big citrus hop taste.

Rated by slammo from New York