Magic Under Where?
Al's of Hampden / Pizza Boy Brewing 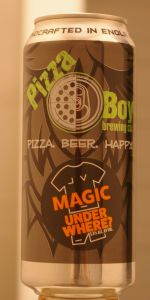 At long last, I am finally getting around to an extensive brewery horizontal to clear out a massive backlog in support of The CANQuest (tm). I knew that I had a number of their beers in abeyance, but it was not until I beCAN assembling them that I realized just how extensive my inventory actually was. 6/16.

From the CAN: "Handcrafted In Enola, PA"; "PIzza. Beer. Happy."; "Proudly Brewed In Pennsylvania".

Knowing this beer's origin & inspiration, I was not surprised that it got shunted to the back burner until now. Still, I happily Crack!ed open the vent & beCAN a slow, gentle C-Line Glug into the awaiting glass. I got some beautiful foaming that eventually settled into two-plus fingers of dense, foamy, rocky, bone-white head with decent retention, leaving a load of lacing in its wake. Color was an oh-so-slightly-hazy Yellow-Gold (SRM = 4 - 5) & led to the arising of the age-old Qs: chill haze?; poor pour? or naturally ocCANurring? Hmm. Nose was fruity with blueberry & pineapple leading the charge, but with naughty little Simcoe the kitty doing her catty business somewhere in the background. My guess would be Mosaic & Simcoe hops. Mouthfeel was medium-to-full, not quite creamy, but on the approach. The Simcoe cattiness was quite evident in the taste, acCANponied by a strong pine mintiness & underlain by blueberry & pineapple. 8=O Pretty tasty! Finish was bitter & dry, but reasonable. YMMV.

You know that you've been on here too long when you can't recall when you traded for a beer that took ages to get to and can't recall anything else about where it was brewed, but that was the case with this American IPA. I have no idea where the magic in this was if it was under anything, it was my expectations as it didn't even meet the low ones that I had for this...

Golden, turbid, and dark, the appearance to this was fine but not spectacular and thankfully, there wasn't any massive sediment floating around in the liquid. Plenty of soapy head topped this off but the lacing was hardly anywhere to be seen as there were only a few hints of rings that remained on the back side of my pint glass once I started to sip this. Plenty of soap, citrus, piss, and grain in the nose as some dewy grass, lemon, tangerine, and tropical pith emerged in the taste once this fully warmed up. Not quite harmonious, there was enough to like here if you were a die-hard imbiber like me but this certainly wouldn't have won anyone over to the style...

Not a lot of booze here but this felt stronger than it was in actuality because of how weak the carbonation was. Pizza Boy was an appropriate name for this brewery given that this would go well with that dinnertime staple. Otherwise, this wouldn't be the first beer that I'd reach for as it was more typecast and mindless than anything else!

Looks...passable I guess. Pale yellow with no head and minimal lacing. Smell is pretty average, a melange of pine and herbal hops, with a faint touch of lemon Taste is same with a little more bite and more lemon. Feel is a touch dry and long. Not a bad beer, but not memorable at all.

Lemon zest and pine needle hoppiness backed by bone dry, biscuit-y malts. Light and airy both in texture and flavor this is a decent warm weather sessionable American pale ale. I disagree with the IPA classification here.

Light golden color with a big white head and spotty lacing. Hoppy citrus aroma. Notes of grapefruit, piths, hop resin and light grain. Crisp, crushable and clean. This wasn't the best IPA I've ever had but it drank so well I forgot to review it while I drank it.

I didn't add this beer, but it looks like I am the first to review it. Poured from a 16 oz. can. And yes, that can came courtesy of the amazing woodychandler. Has a witbierish golden/white color with a 1 inch head. Smell is of citrus, hints of pine. Taste is grapefruit, light lemons, a mild bitterness. Feels medium/light bodied in the mouth and overall is an easy drinking beer, more like a session IPA than a hoppy one.