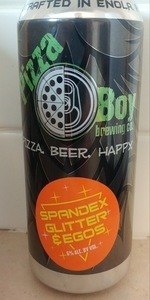 Look: It pours a very hazy, almost cloudy, deep golden body beneath a finger-thick head of slightly off-white foam. The head retention is excellent and it delivers better than average lacing.
Smell: Not really that bold for an IPA... some floral notes, some citrus, some woodiness/pine... and of course some bready malt. In all honesty, it smells like a pale ale, and considering that it's only 13 days old [fresh] I have no problem in pointing that out.
Taste: It pretty much tastes exactly as it smells except that the hops are much stronger here! It reminds me of so many pale ale and IPAs from the early 2000's with a basic malt that has just a touch of a biscuity quality to it and the 3 C's in full effect (Cascade, Centennial, Columbus). I actually prefer this to the pale ales and IPAs of the mid to late 90's which were almost all dosed to about 20% with caramel or crystal 60 (to a fault), so at least it has that going for it, but "Spandex, Glitter And Egos" is a far reaching name for it given what's actually there - "Dad Jeans And A Polo Shirt" might be more appropriate. Additionally there's a bit of a raspy citrusy note, similar to grapefruit citrus pith, or even a bit of lemon, that's
Feel: Medium bodied and crisp - no issues there.
Overall: Lackluster, mediocre, boring. Perhaps mediocre is not a good choice of words though as it is of good quality, it's just not anything more than that.

Poured a hazy amber from draft. Thin white head. Aroma is faint citrus and hops. A bit of soapiness. Unique earthy taste. Citrus and piny hops but not too bitter. Moderate body and carbonation. Easy to drink.

Not bad, but a bit soft on flavor, sessionable taste for sure.

This cloudy unfiltered looking beer has a very down to earth taste with a hoof grains and a please smooth citrus after taste. Very enjoyable beer!

A: slightly cloudy straw color, with an inch of head that maintained a thick ring throughout.

O: nicely balanced IPA, easy drinking at 6%, with the feel of a bigger beer. Would certainly drink again. Great offering.

16 oz can poured into an imperial pint glass.

Overall
Smooth and well balanced. Dank and tropical. It's one of my favorite Pizza Boy beers as of late.

Overall a really nice session beer; would definitely buy this for BBQ's if I lived by Pizza Boy.