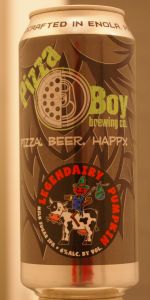 At long last, I am finally getting around to an extensive brewery horizontal to clear out a massive backlog in support of The CANQuest (tm). I knew that I had a number of their beers in abeyance, but it was not until I beCAN assembling them that I realized just how extensive my inventory actually was. 7/16.

It is listed on here as an AIPA, but the label mentions "milk sugar", which suggests an NEIPA, but that's just my opinion, man.

As such, I Crack!ed open the vent & beCAN a slow, gentle C-Line Glug just to see what would develop. I got two-plus fingers of dense, foamy, rocky, bone-white head with moderate retention to start. Color was an oh-so-slightly-hazy Golden-Amber (SRM = > 5, < 7). Nose was quite spicy with a definite cinnamon & nutmeg presence, but I was not getting any vanilla. Mouthfeel was medium-to-full, not quite creamy, but close. That is attributable to the inclusion of milk sugar, I suppose. The taste, while spicy, did not really measure up to the style. It would be better served as a Pumpkin Ale, but the brewery chose to market it as an IPA so it is on them. It tasted much like so many other Pumpkin Ales with the usual spiciness, but this had an artificiality that, as @NeroFiddled mentioned, was reminiscent of a Yankee CANdle. Hmm. Finish was dry, thanks to the inCANsion of spices. I was left feeling underwhere. Sorry, different beer of theirs. I felt underwhelmed. YMMV.

Pours with some haze and light lacing. Nose is more clove and pumpkin spices than anything else...not really getting any IPA hops. Seems like they used a light touch and the spices used have a fresh smell. Taste isn't as good and really didn't do anything for me. Muddled fall spices, residual sweetness, not much malt flavor. Some kind of off twang. Nice smell...just didn't dig the taste.

Light to medium body, tingly carbonation on the tongue.

Pours a slightly hazy straw color with a half finger of head. The nose has decent notes of pumpkin spice. The flavor has a slightly sweet pumpkin essence and a dry finish. The mouthfeel is smooth and creamy.

Notes via stream of consciousness: Surprisingly golden-amber in color, I was expecting it to be darker. Hazy, even cloudy like a hefeweizen. Full frothy head of off-white. It seems to be holding well. The aroma is sweet and pumpkin pie spice-like with some nice vanilla. I wonder if there's any pumpkin in this or if it's just spices. And is that cinnamon? Or is it Ceylon mace? I guess we'll find out in the flavor... hard to tell, the cinnamon component seems to be more of an aroma than a flavor, but I do get lots of vanilla. No disrespect, but in both the aroma and the flavor this reminds me of the smell of a Yankee Candle shop. Looking back, there's nice lacing, so there's that. Very nice lacing in fact. The aroma appears to have changed a bit now that I've had a sip and I'm finding less cinnamon and more vanilla and floral character. There is some spiciness but I'm not sure if it's nutmeg of cinnamon or something else. Somehow I don't think they used real spices and this is some kind of extract but that's not listed on the can. Of course neither is the volume, so there's that. Back to the flavor it's sweetish, and nicely flavored with "pumpkin spice", and although not that bitter still balanced. It's not the best pumpkin beer I've had, but it's miles ahead of some of the worst examples, and it's certainly unique. Mouthfeel - there must be some lactose in here, which would explain the name, and that gives it a smooth, medium body with a dextrinous edge that makes it seem bigger than it is. Median to moderate fine-bubbled carbonation. Overall it's OK, it's nice, it's nothing fantastic but it makes a good pint.