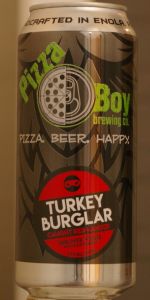 At long last, I am finally getting around to an extensive brewery horizontal to clear out a massive backlog in support of The CANQuest (tm). I knew that I had a number of their beers in abeyance, but it was not until I beCAN assembling them that I realized just how extensive my inventory actually was. This will mark the first of many to come. 1/16.

Apparently, this is a variant of Turkey Burglar, making it extra lucky that I was able to score a CAN. Given its style & inclusion of an adjunct, I did some in-CAN agitation before Crack!ing open the vent. Following the Crack!, I CANtinued with a heavy-handed aggro Glug to keep things in suspension. I was getting a finger of rolling, fizzy, foamy, pinkish head that fell as quickly as I poured, eventually leaving me with nothing but wisps. Color was a murky, cloudy, turbid Pink (N/A), somewhere between pink grapefruit juice & tomato juice in color. Nose was redolent with raspberries & my mouth both puckered & watered in CANticipation. Mouthfeel was a bit thin, but that is the norm for the style. I have had straight Berliner Weisse before, as well as with added green (woodruff) and red (raspberry) syrups, but this was the way to go! It tasted of real raspberries, not simply an added syrup, as well as being quite tart, a quality that was reinforced by the use of actual raspberries. Now, when I say "tart", I mean TART! This was really puckeringly tart and a perfect thirst-quencher on a hot, humid Summer's day. Finish was tart, dry, refreshing and lingered with the taste of raspberries. Mmm. YMMV.