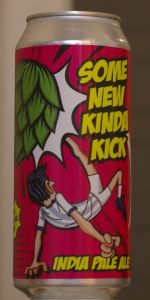 Notes: A simple and straightforward summer crusher… clean, crisp and citrusy. Brewed with a mountain of oats for a pillowy body to showcase the blend of Chinook, Amarillo, Ekuanot and Falconers’ Flight 7c’s hops. So, if your lookin’ and lookin’ and lookin’ for, something you ain’t had before, you better try to find Some New Kinda Kick.
View: More Beers | Place Reviews
Recent ratings and reviews.

Smell is light, but develops with light malt and biscuit notes, some toast, hint of lemon and citrus, but again light.

Taste is similar with light but enticing malt, hint of biscuit, light pilsner like flavor, hops are light with lemon and light tropical fruitiness.

So close! I had just finished my run-through of a Pizza Boy brewery horizontal in support of The CANQuest (tm) when I made a couple of beer runs while checking up on my mother's house on the other side of the city. I was at Rieker Bottle Works when I spotted this one & one CANother on the shelf & decided to extend the horizontal just a bit further. 17/18.

From the CAN: "Some New Kinda Kick India Pale Ale"; "Proudly Brewed In Pennsylvania"; "Pizza. Beer. Happy."; "Please Enjoy Fresh, Preferably With Pizza. Do Not Age."

I Crack!ed open the vent & was met with a little bit of spritzing due to its being a brimful craft CAN. My slow, steady, C-Line Glug resulted in the formation of just under two fingers of dense, foamy, rocky, bone-white head with good retention, leaving decent lacing behind as it fell. Color was a slightly-hazy Pale-Straw (SRM = 1 - 2). Mouthfeel was soft, as though they had used soft water in the brewing of this one. Hmm. Nose was tropical, but it did not exude much more than pineapple, although there were some other, undefined fruits in the mix. Taste was slightly bitter with a light tropical fruitiness, but not well defined. It was difficult to parse the flavors due to their lightness. Finish was semi-dry, but I was left feeling unfulfilled. This was, apparently, originally an APA, but even then, it would have been a weak sister. As an AIPA, as indicated on the label in the approved pic, it was an even lesser example. YMMV.

Good pale ale that only fails at sticking out from the crowd - hops a little grassy, standard pine elements, finish with a slight herbal twinge. Malt pretty light / crackery.

Notes: Is the name of this beer a reference to a Cramps song? If so that's a little odd as this thing doesn't have nearly the power or the energy of the Cramps, but whatev's. Nor is it really that original. It's OK, it's piney and citrusy and tropical and floral and herbal but it seems like there are so many different hops in there that they've all become muddled, falling in and around each other so that nothing really stands out. It's like an American pale ale that took too many steroids and got very muscular but not any smarter. Still, I kind of can't complain although I kind of am.... it doesn't have the finesse of a Sierra Nevada Pale Ale but it does have some brute hop strength, so I guess there's that. It's an OK pint for the price I guess but nothing special. Maybe I was just expecting a little more from Pizza Boy as they've put out much better stuff than this.
Review# 6,133