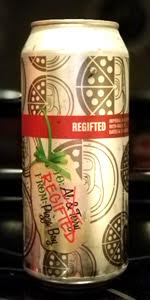 Pours a light brown with honey edges and a half finger of head. The nose smells like the house when baking Christmas cookies. The flavor is also very cookie-like, specifically a sugary cinnamon raisin cookie. The walnuts, dates and cinnamon are all apparent in the flavor profile.

There's a limit to how much one can drink of this offering as the sweetness becomes a bit overwhelming after awhile. Also, the booze comes out a bit as this beer warms.

On tap at the brewery. Pours a beautiful clear golden amber with a thin off-white head. Initial impression is sweet, syrupy, and sticky, with a definite cinnamon presence. Mouthfeel is thick, viscous, and sticky. Alcohol is extraordinarily well hidden. Finish is smooth and sweet.
A little too saccharine for my tastes.

S - Toasted toffee/caramel malt with cinnamon and cream. There is a definite sugar presence here as well adding to sweetness.

T - caramel first followed by tongue followed by vanilla and cinnamon. There is a limited alcoholness to it given ABV.

O - This is a well done beer. For the alcohol content, it's well flavored and notnsimy oozing booze. I personally would have appreciated a touch more carbonation.

S - Toasted toffee/caramel malt with cinnamon and cream. There is a delicate sugar presence in the nose.

T - Some toasted caramel malt up front nips the tongue followed with an assertive cinnamon presence with a slight shot of vanilla. Ends with a lingering cinnamon and spiced malt with some subtle walnut laying low in the background. There is some alcohol booziness but ever so slight.

O - This has to rank right up there as one of the most unusual and interesting beers I've had in 2018. This is definitely on the sweeter side for a beer but never cloying. The 10.2% is incredibly well hidden and Pizza Boy hit the mark. If you're diabetic, have an insulin pen on hand. (LOL!)


Regifted (with Walnuts, Dates, and Cinnamon) from Al's of Hampden / Pizza Boy Brewing
Beer rating: 4.07 out of 5 with 6 ratings