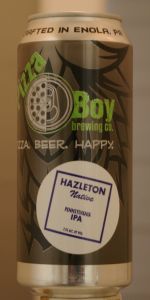 A thanks to the commander of the canquest, woodychandler, for this beer. Poured from a 16 oz. can. Has a slightly hazy golden color with a 1/2 inch head. Smell is of citrus, tropical fruits. Taste is pine, grapefruit, light tropical fruits. Feels medium/full bodied in the mouth and overall is a solid beer.

Two fingers worth of fluffy bone white colored froth with a rocky top and good retention... The color is a slightly hazed mix of light bronze (towards the top of the glass) and lemony yellow (towards the bottom of the glass)... Some gobs of lacing cling to the sides of the glass... Nose is of sweet mandarin oranges and canned peaches... Flavor profile is a nice balance of bready malts and mild earthy hops with no really sweetness to speak of... The fluffy froth greets the upper lip and sits atop a medium bodied and sturdy offering with a small carbonated bite... Over a really solid and enjoyable IPA... Goes down easily sip after sip after sip....

I have been trying for a couple of days to get in this review, only to be met with fits & starts. 8=( At last, I am about to add Pizza Boy's Hazleton Native Pennsylvania IPA to The CANQuest (tm)! Believe me, it is not usually this CANplicated.

From the CAN: "Handcrafted in Enola, PA"; "Pizza. Beer. Happy."; "Proudly brewed in Pennsylvania".

I Crack!ed that bad Boy open, but in keeping with recent preferences & in deference to its being housed in a pint CAN, I went with a slow, gentle Glug into the awaiting glass. The CANticipation built as I watched it come out to meet me. I returned its elation with an in-glass swirl that raised just under two fingers of dense, foamy, rocky, light-tan head with decent retention that followed up by leaving me some nice sticky lacing in its wake. We Pennsylvanians stick together! Color was Deep Amber/Light Copper to Copper (SRM = > 13, < 17) with NE-quality clarity & I again thought of Linda Lou, one of the ones who got away. 8=( She was a beauty with hair about this shade. Nose smelled like this hophead's wet dream! It was pungent with hops of every AmeriCAN stripe, from dank pine to grapefruit citrus to the tropical trio. Yum! Mouthfeel was medium-to-full, not quite creamy, but big for an AIPA. What an explosion of hops in my mouth and on my tongue! It was a hopsgasm & I was not quite prepared for it. Man, Terry Hawbaker, the Hazelton native in question, really outdid himself with this one! The tropical fruitiness was prevalent, but the pine and grapefruit held their sweetness in check as the biscuity malt shored up their efforts in an understated, earthy way. This did not have the intense bitterness that usually sends me, but neither did it have a cloying sweetness. Instead, it was evocative of the early EIPAs as they began to bloom and blossom into the modern AIPA. This is how I remember Victory Hop Devil as I first realized that I was a hophead. It was hoppier than most IPAs of the time (~ 20 years ago), but not so hoppy as to be a palate-killer (although I have no problem with that). The relatively low ABV made it an excessively easy beer to drink & soon, I was over halfway through it without even a seCANd glance. Finish was dry, but not biting. I was still getting a good bit of melon & tropical fruits, but at the same time, the other flavors were not being overrun. OMFG! YMMV.

Served on-tap at Al's of Hampden.

A - Pours clear golden yellow with a nice one finger tall white head, dissipating down to a light film, leaving spotty trails of thin lace down parts of the glass.

T - Starts off with an intense citric hop bitterness, that lasts till the finish, slowly giving way to hints of tropical fruit and some caramel sweetness. Finish is pretty dry with a touch of sweetness, not lingering on the palate for very long.

M - Medium body with moderate carbonation. Smooth, bitter feel from start to finish with some lingering dryness at the very end.

O - This version is quite West Coast yet still easy to finish. The hops are bright and flavorful but not overpowering. A really nice, simple IPA. Give it a try if you have the chance.