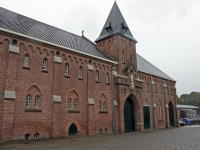 Great visit here! Make sure you get there in time to hit the gift shop. Staff speaks great English, too.

5/5  rDev +16%
by FightingEntropy from Minnesota

A few weeks before the US invasion of Iraq in 2003, the price of airline tickets to Europe plummeted and we flew nonstop from MSP to Amsterdam for a long weekend because it was cheaper than any domestic vacation we tried to book. One of the best trips we've ever taken, a highlight was a train to Tilburg to taste La Trappe at Koningshoeven.

Returning this summer to the Netherlands with our niece for her college graduation trip, we took the opportunity to stop again for the tour. La Trappe was both familiar and changed at the same time.

In 2003, we walked into the tasting room and the tour guide, Berrie Verhagen, asked if I was Cal on the first beer I ordered. I asked "How did you know?" We were the only Americans there. We toured the brewery with Berrie giving English translations of the previous Dutch explanations from each stop. Today's tour is very similar minus the walk through the bottling room. Also, at the end now, there's a video covering all things La Trappe while samples are poured. English speakers drank first, which was a nice bonus for coming so far.

If my memory is correct, the present gift shop was the old tasting room. Back then, cheese made with the quadruple and brewery bread, while great, was the best on the menu. For this trip, we showed up early enough for the 2 pm tour to have lunch first. My salad was pretty incredible, but my wife hit the jackpot by ordering the raisin-nut bread with Brabant blue goat cheese, pear compote, and nuts (grantinated in the oven). Not even sure what to call it, but the bite I was allowed to savor was spectacular. After the tour, I had Brabant strawberries with "hang-op," a uniquely Dutch topping according to the waitress. Even without the trappist ales, this is a place worth visiting just for the food. Magnificent. If you make the trip to Tilburg, please leave enough time to eat. And, of course, there was beer: before, during and after the tour.

My wife predictably started—and stayed—with the Quadruple. Easily distracted by something new, I got the once brewed 25th Anniversary Ale called Jubilaris and followed with Puur, La Trappe's organic pale ale. Ended with a bottle of the Oak Aged Quadruple, batch 16. According to the waitress, each batch of the oak aged quad is tweaked a bit differently. In beer press, La Trappe sometimes doesn't get the respect of other trappist breweries, but I love their line up, especially the quad.

Tilburg is a bit off the beaten tourist path, but public transportation to Koningshoeven is easy. Bus 141 drops off right in front of the abbey and it's an easy walk to the tasting room. The bus runs hourly, so timing is important. To return, the bus pick up is across the road and down a little bit. In 2003, I read the time wrong because we didn't realize that the return bus was on the other side of the road, which resulted in a us walking back to the train station in a light rain. Our first trip, we took an easy train ride to Tilburg from Amsterdam for the day and returned that night. This trip we had rented a car for a few days, so simply got a room at the Bastion Hotel (cheap, basic but perfectly adequate) because it's the closest one to the abbey. We just missed the bus from the hotel to the brewery, so we walked the 20 minutes rather than wait for the next bus. In the end, we've ridden the bus each direction—just a decade apart.

Two years ago, my wife and I visited Westvleteren in Belgium, which was also a great day, but much more difficult to get to with public transportation. While I've only been to two trappist breweries, La Trappe is an easy visit and well worth the effort, especially with the serious upgrades to the food and tour structure. I encourage you to settle in for an afternoon and leisurely enjoy the full range of La Trappe beers.

Very nice location with the old monastery right next to the tasting room. Very nice terrace to enjoy the La Trappe selection outside in the sun. Decorated tastefully with modern interpretation of the wood and brick history. Very respectful yet open for lots of tourists. Good waiters and prices are in line with your expectations. Nice visit. Didn’t try the food but that looked good too.

Highly recommending any fan of beer to go to this establishment if you're in the area. If you're several hours away, still highly recommended. Worth the trip!

Just recently moved to Belgium, and a buddy of mine said I HAD to check this place out. So we did. And it was glorious.

The restaurant area was like the other reviewer said, very ski lodge-y. But great atmosphere, nice fireplace, and the beer and food were incredible. Had 7 (I think) beers in the flight, everything from La Trappe White, Blonde, Dubbel, Tripel, Is'idor, Quadrupel. Yeah so I had all six of those in the smaller glasses, which really weren't that small at all (25cl, maybe?). Finished it off with my current favorite Trappist brew, the Isid'or.

The food was great, the sandwiches look amazing and taste just as amazing, the appetizers were yummy. Everything has got some level of beer in the ingredients. You just can't go wrong.

Gift store was great, dropped a little bit of cash for quite a bit of stuff. Make sure you try the chocolate, it's pretty yummy. Got a huge La Trappe glass that will be holding all of my beer caps during my tour in Belgium. I didn't notice what the price was on cases, will go back and see if it is any cheaper than the local beer stores.

Fantastic courtyard area, lot of room to relax and eat outside as well. I can see hundreds of cyclists coming here in the summer for a nice stop. Amazing!

I wasn't able to tour the brewery or the sanctuary or anything, will leave more input when I finally get a chance to see it.

Brabander and I stopped in here on 05OCT12. It was our first stop on a quick tour around the Tilburg area.

The brewpub is located in a building separate from the old (pictured) brewery. It looks like a supersized thatched hut on the outside, and a Vermont ski-lodge inside. Big, angled beams support the cathedral-like ceiling, with a corner fireplace and long, German-style tables all over. The front has a large bar where you can score one of about 6-8 draft biers. Tripel, Quad, Dubbel... the whole gamut was here, and they were good! Food looked good, too, though we didn't partake. Service was solid and friendly. There is a super gift/bottle shop in an adjacent building, too. Great times! Thnx, Thijs!!

Bierbrouwerij De Koningshoeven B.V. in Berkel-Enschot, Netherlands
Brewery rating: 3.93 out of 5 with 7207 ratings