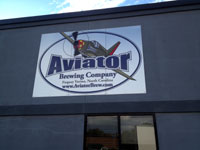 Our tap house is located about a mile down the road...

About 20 brews on tap.
I think about every style is covered today. Marzen, lager, Pilsner, kolsch, wheat, NEIPAS, spiced, sours, porters and stouts, a little something for everyone.
Sixers and growlers to go. Crowlers will be here soon. 12/21/19.
Lots of games, but no food. Any kind of snack food would be a welcome addition.

A lot of variety. Great food selection. Awesome decor. Smokehouse is part of it which is a great addition and makes it easy to keep coming back. Will be returning!

I've been to the Aviator Brewery a couple of times now, the first time was back in February of 2009 and then just this last weekend here in September of 2009. What a difference! This 'brewery' is located in an airplane hanger at a very small airport out in the middle of nowhere. The first time around, they were quite literally brewing out of some old jacketed dairy collection vessels and brewing very small batches. There was an actual 2-seater airplane parked in one corner, a small bar with a hand full of taps in another, and the brewing equipment in a third. The rest of the area was open.

What a difference a few months has made! There are several conical fermenting vessels, a huge cooler with perhaps a dozen or more taps, and not much room for anything else! The plane is in an adjacent hanger - there's only beer here now.

Everything is wide open here. The hanger door stays open allowing a view of the surrounding airport. There is no A/C but that just adds to the ambiance of the place. There is frequently live music playing and is generally just a fun, comfortable place to go enjoy a decent craft brew.

On each of my visits, I have found the owner and head brewer very accessible and proud to talk about his creations. He has many years of brewing experience and is basically brewing the beer he likes to drink. Fortunately for me, I like his taste in beer! Instead of focusing on 2-3 standard recipes and a couple seasonal brews like so many other breweries, the pretty much has from 6-8 different styles or recipes on hand at any given time in addition to a couple trademark brews. It makes it much more interesting to beer drinkers who enjoy exploring a little bit, instead of sticking to an old standby.

The beer is the star here. Heavy on the English style of brew with some sweet experiemental recipes all the time. If this sounds like something that would interest you, check them out. Keep an eye out for the Aviator Taproom, coming soon to downtown Fuquay-Varina.

Don't go to this micro's web site before drinking their beer. I wish them all the luck in the world but I have tasted about 6 of their hand crafted, small batch beers and do not care for them. To me it is similar in taste to the Big Boss beers brewed in town at the old Edenton Brewery. Again, IMO they taste burnt, bitter and syrupy. The lighter colored beers are better than the darker ones but just so. The concept and spirit are great and I think they are doing well like Big Boss and Boylan but I like Foothills and Highland the best of the NC brewers. Call ahead to make sure they are pouring before trekking all the way out to Airpark.

Aviator is located down a bumpy paved road inside a former hangar - though the "airport" still remains active, as you approach from 401 keep an eye out for the sign towards Triple W Airport, arrived on a Saturday afternoon just after the weekly tour had ended as a cover band set up outside and a single-prop was taking flight, patrons had begun to set up lawnchairs on the pavement outside, the majority of the interior space houses a microbrewery setup as well as two bars and a few tables, the place was packed and lively but I was able to snag a seat at the bar for my short stay...no AC? no problem, just adds to the humble, backyard garage feel and attitude found here

there were about six house beers on tap...ESB, IPA, Pale, Berliner Weiss, Saison, and Pilsner - I went with the Saison, served in a full pint and quite tasty, price was $4 for all beers, growlers available

my bartender was a bit short and cold, but in her defense she was slammed with an unending flow of one customer after another, the male bartender seemed to be in a better mood despite these circumstances

Aviator Brewing Company in Fuquay-Varina, NC
Brewery rating: 3.7 out of 5 with 1729 ratings