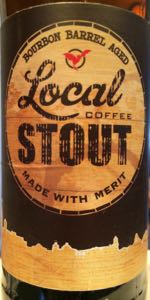 Pours a pitch black with cocoa colored foam, with a big present coffee aroma. The coffee dominates the flavor with a nice toasty finish. A big beer with a delicious finish.

Poured from a bomber into a snifter. Look was a dark brown/black, with a small whitish head. Smell is very pleasant, with hints of coffee, brown sugar, cocoa, and vanilla. Taste was more simple, with a dominant bitter coffee roast, followed by a hint of dark chocolate, cocoa, and a bit of an oaky burn. A little thin in the mouth, and sort of dry. Overall, this is a good beer, but didn't stand out.

On tap at Cottonwood for the Freetail event.

A: Pours a dark brown, nearly black color. At first a two finger beige head forms, and gently recedes in a minute. Light lace is left behind.
S: Light roast and milk chocolate with some mocha coffee. Vanilla becomes strong towards the finish, which I assume comes from the barrel. Though overall not a lot of barrel character, but still really enjoyable.
T: Up front is the coffee. Light roast, even cream and milk chocolate. A big vanilla flavor takes over, and adds a really good dimension here. Just a bit of oak tannins, but overall not a lot of barrel. Still, everything is spot on and really well balanced. For being barrel aged, and such a smallish abv for the style, this really is well balanced with a ton of character.
M/D: I thought the base beer was a just a bit thin, and that holds true here. Certainly not under carbonated or watery. Very much ultra smooth and velvety. Like the base, really enjoyable to drink. Actually I am surprised at how much character there is here.

For the amount of time this spent in a barrel (not much) and the base beer (a really good, but not super thick stout), the barrel treatment worked really well. This is a great alternative to some of the bigger, more viscous barrel aged stouts if you get worn out by their heaviness. While not being as big, it does not lack anything you would want. Impressive for this kind of stout.