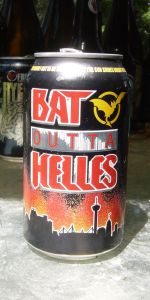 From a can. Light amber color with a thin layer of white head. Grassy smell. Medium body, maybe a little heavy for the style. Grassy malt, a little sweetness, and some floral hops. Fairly close to the German versions I've had, nice to see an American brewery doing a less-common German style.

a well made helles here, checks all the boxes, but feels just a tad heavy to me as they go, not a heavy beer, but lots of malt body compared to many of its peers, even though its still golden and light looking, it just seems to have a little more substance to me, not a bad thing, but in a pint pounding session these might start to add up a little quicker than helles normally does. mostly clear with some shine to it and a nice inch of airy white head. aroma and flavor have just a little german malty breadiness, it hasnt been lobotomized the way a lot of yellow beers are, and it also has a light floral honey sweetness to it, plenty of character here for sure! the yeast is nice and the fermentation is clean, old worldy and crisp, patiently lagered, some minerals at the end, and it evaporates from the palate pretty fast. i dont mind the extra body, its still a really light beer, and i like how it retains some of its german character where so many helles types do not, and end up just tasting like american lager. i like all the beers these guys make!

Impression from a can:

APPEARANCE: Pours a somewhat thin off-white colour head of ~5 minute retention. Not real frothy, creamy, or robust, but not watery either.

Body colour is a clear pale copper. Obviously filtered. No yeast/particulate is visible within.

AROMA: 2-row barley, Munich malt, graininess, husky almost adjunct-like grains (hinting towards corn), and banana. I'm surprised to detect what seem like esters in a beer ostensibly brewed with German lager yeast; it ought to be ester-free and clean.

Aromatic intensity is average. Lacks any distinct hop aromatics. No off-notes or booze is detectable.

TASTE & TEXTURE: Drinks easy and feels clean, but it's overcarbonated and simplistic. Creamed corn comes to mind, giving it an adjunct-like bend where it ought to adhere squarely to a clean 2-row malt backbone. Hints of esters perplex me; where's the ideal attenuation of well handled lager yeast? Mineral-emphatic in its water profile.

It's not imbalanced. It's so basic it's tough to find much to appreciate about it in the absence of perfect balance. True to style, it lacks any overt hop flavours. But it also lacks malty intricacy and its yeast profile is too overt for a lager. Not recognizably German in character to any extent.

OVERALL: A drinkable forgettable beer that can't hold its own against traditional German expressions of the style. Feels like a beer Freetail brewed because they thought the name was clever. I'd like to see more commitment to crisp pilsner malts and softer water, and utilization of only German hops (instead of whatever ersatz American substitutes were employed here). I'll enjoy finishing the cans that came in my Freetail variety box, but it's a wanting attempt at a style rarely executed well by American breweries. To its credit, though, I'll say that it isn't overhopped - which is a common mistake in American-brewed expressions of the style.

Poured from a can into a pint glass. Poured a clear yellow with a short lived head but good lacing. The smell was pleasant, grassy and sweet. The taste was nicely malty and slightly sweet. Enjoyed it for lunch.

That's some really good beer. It's very smooth, crisp, clean, refreshing and has nothing offensive in it. It can easily compete with German imports. My first beer from Freetail and it's impressive.

This one pours a nice opaque golden color with a reasonably nice head that settles quickly leaving little to no lacing.

The nose is a nice peppery and fruity hop that is ridding the malt and fructose like a gentle wave.

The flavor is classic lager with a great hop to malt balance and a crisp hop finish. there are subtle notes of apples, pepper, grass and pine.

The moutfeel is just right for a lager and delivers the flavors to the palate thoroughly.

Overall a very drinkable lager and enjoyable from start to finish.

Taste: Clean, balance is toward the Pilsner malt which is grainy, and a bit gritty. The sweetness is cut pretty firmly with an earthy hop, tastes noble and European, a little peppery.

Feel: Body is a little heavy for the style, ends up being a little too filling instead of refreshing. Mild chew on a medium heavy body, medium light carbonation is a bit prickly. Finish is oily and lasting, which is a bit much for the style.

Overall: Darn tasty. It's a big beer squeezing into the Helles category, but better that they are giving us too much rather than not enough. Very happy with my first two cans from Freetail, looking forward to more.

I've wanted to try the Bat for some time, and liked the look of the can. Good color as far as Helles-style beers go, not a very thick head. Enjoyed the aroma and flavor. The finish was fairly dry, but quite refreshing. Overall I found this beer accessible, refreshing on a mildly hot San Antonio afternoon and a solid choice.

Poured at 44°F from a 12oz can (canned on 20Nov15) into a Pilsner glass. Consumed on 31Jan16.
LOOK: Pours with two fingers worth of white foam that dissipates into a quarter fingers within 1 minute and 45 seconds. A subtle amount of very thick lacing is a left behind from the head dissipation. Straw yellow in color with a high amount of cloudiness. A plethora of medium-sized rising bubbles is present even after the head settles. Lacing is thick and moderate.
SMELL: Strong aromas of buttered biscuits and spicy hops combine with floral hop aromas.
TASTE: The initial taste is a simultaneous interaction of mild flavors of buttered biscuits, floral hops, and spicy hops.
FEEL: Full-bodied and highly carbonated. Goes down somewhat rough. Finishes with a strong dryness.
NOTE: A very sessionable Munich Helles. Incredibly balanced per tradition of the style. However, I personally like my lagers unbalanced with the malt flavors taking over. Definitely worth a try.

Not my favorite style but a good drinking beer. Pale yellow, minimal head, good mouthfeel. Mild malt up front with a faint hop finish, tad sweet on the semi-dry side

A: Pours a clear straw yellow color. A dense, two finger white head forms with excellent retention. Light lace is left behind.
S: Biscuit and bread like malts up front. A bit of sweetness, and hint of grassy hops in the finish.
T: Like the nose, bread and biscuit like malts up front. A light sweetness, light grassy hops. Very simple, but enjoyable.
M/D: A light body and effervescent carbonation. Maybe a bit to watery, but not bad at all. Super clean as well. Really simple, but that is what makes it so enjoyable. I'll be looking for this when cans finally hit Houston.

A very good, if not completely exceptional lager. Again, just simple and enjoyable. This might not be my favorite Texas made lager, but there will always be space in my fridge for this.

Awesome! Will look for this during warmer weather. Easy drinking. Clean crisp flavor. A little malt flavor too. Huge foam at first pour then fades quickly.

This is one damn fine beer. Crispy -and- malty, how can that be? well, it is. And smoothly so. What an easy drinking brew. Every can is perfectly crisp and delicious, making you want another slice of pizza. Highly recommended.

I love the name of this beer. Clever. Especially since Freetail is the name of… wait for it.. a species of bat.

Seriously, I’m surprised this name hasn’t been used before. Or has it and now the good folks brewing it are going to get another cease-and-desist letter. More dinosaurs!
Anyways, on to the beer.

This is a cloudy, golden colored brew with billowy foam that eventually collapses down. It has one of those estery Belgian aromas that’s familiar yet hard to describe precisely. I get the sense of flowers in bloom, orange pollen, and wild honey. I’m beginning to think that this honeyed aroma and flavor is a brewery signature as I’ve detected similar notes in some of their other beers.

What surprises me on the flavor is that there’s this Belgian-y estery lightness but it’s met with a biscuity malt profile. Some hop bitterness brings things to a sharp point and it has a clean, clear finish. A real easy drinker.

Appearance: Pale yellow-golden with a thin white head that leaves a lacing over the top and clings to the sides of the glass.

Aroma: Slight biscuity aroma from the malts and a tough of spicy hop notes.

Taste: Slightly bready and sweet like a traditional helles lager.

Mouthfeel: Light with high carbonation and a dry finish, no lingering flavors.

Overall: I'm not really a big fan of the style in general. As far as beers of this style go it was a good version, but I probably won't order it again.

Thanks to travita for sharing this growler.

The beer pours a slightly hazy gold color with a white head. The aroma is wheat, grass and earthy hops. The flavor is a mix of earthy and grassy hops as well as citrus fruit and wheat. Medium mouthfeel and medium carbonation.

Served on draft at the brewpub.

Pours a hazy golden ripe banana color with dark golden yellow hues when held to a light source and a one finger white head that quickly settles into a lasting ring. Completely opaque.

Subtle aroma with hints of light fruit, subtle hops, pilsne malt, grass and straw. Only slightly earthy with hints of apple, pear and banana in the nose.

Fuller bodied than I expected with a nic crisp dry earthy hop presence u front that is countered by a nice pale malt backbone as well as some light fruit notes and straw. Apple and banana are the prominent fruit notes. This beer is very complex and flavorful and at 4.9% it is incredibly drinkable.

A- Pours a clear golden with fluffy white head with excellent retention and lacing down the glass.

T- Light malt sweetness and minor corn. For the style, almost right on.

M- Light, crisp, refreshing with excellence carbonation tingle on the tip of the tongue.

D- Perhaps one of the most quaffable beers I've had this summer. Given the record heat we've been experiencing, this one is a go-to-over-and-over beer on a hot day. Very well done.

Bat Outta Helles from Freetail Brewing Company
Beer rating: 85 out of 100 with 116 ratings