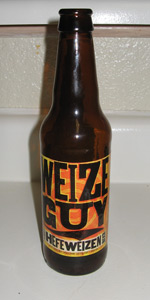 Notes: Our German Light HefeWeizen has hints of Banana and Clove like traditional hefeweizens, but is much lighter in body and easy to drink. This brew is 5% ABV, 15 IBU's, and is best enjoyed at 45°F-55°F.
View: Beers
Reviews: 15 | Ratings: 40 | Log in to view all ratings and sort

The mouthfeel is slightly carbonated.

This hefe to me, is watery. The ones I have had in Germany had more body and better flavors. It is not a bad beer but far from being really good.

Bomber poured into a glass

Hazy yellow, some carbonation, one finger white foamy cap which settles to a white layer of foam

Fizzy in the mouth

Weize Guy is a simple pun that's sure to be on most people's level. Likewise, this mostly clear, bright golden, nearly flat appearance definitely accords with the general public's perception of what a beer aught to look like (nevermind that a proper Hefeweizen is turbid and tall with foam).

A few remarks before trying the beer. First off, when Joseph James says this is "like traditional hefeweizen but much lighter in body and easy to drink" I feel the need to point out the style is by nature light, spritzy, and approachable. Heavy and difficult to drink are not characteristics of a weissbier.

And when the brewery claims their "spin" on the style includes "wheat, oats, noble hops and (their) uniquely complex yeast strain" I'd point out that those are the ingredients for every hefeweizen and that the highly distinctive flagship strain of German weizen yeast does not originate in Nevada. It is not theirs.

With that proviso out of the way, onto the beer. As its appearance (and write-up) suggests, Weize Guy is a lightweight example of the style, its trademark banana, clove and high carbonation are way subdued. The common bubblegum note is also faded and the wheat doesn't 'pop' as it typically does.

While still recognizable as a Hefeweizen, this offers less of everything I love about the style. Nonetheless, the choice to emphasize clear yellow over cloudy orange, lemon over banana, and no spice over some, probably makes this more appealing to mainstream beer drinkers. They sure it's not a Kristalweizen?

Pours a murky light honey orange with a foamy bone head that settles to wisps of film on top of the beer. Small dots of lace drip into the remaining beer on the drink down. Smell is of grain, caramel, banana, and slight spice aromas. Taste is much the same with caramel, banana, and slight spice flavors on the finish. There is a very mild amount of spice bitterness on the palate with each sip. This beer has a lower level of carbonation with a slightly crisp mouthfeel. Overall, this is an above average beer that is drinkable, but a bit subtle and boring for the style.

I have to say at first glance, smell and taste I thought this was a Wit. Pours a very, very murky yellow with creamy white head, no lacing, decent retention. Smell was of some yeast, spice, and a little fruit but a little on the sour side. Taste was a little bit tart with some fruit and slight bread taste, little lemon as well. Great beer on a hot day!!!

As a fan of spicy food, I like lighter notes of this beer. This site is very skewed toward heavy beers, but it shouldn't be like that! I eat with my beer so there! But anyway, not here to disrupt... This was a great bang for my buck, and always goes well with my spicy soups. :)

No, no Goodfellas joke, but a Who Framed Roger Rabbit one: "Nice monkey suit." "Weize guy." Nah, it ain't funny no matter what you do... Anyway, this stuff pours a mostly clear sunset straw topped by more than enough cream-white foam. The nose comprises orange zest, light black pepper, mild clove, and a touch of lightly-toasted biscuit in the background. The taste brings in more of the same, with a healthy dose of the natural mild tartness of the orange, as though you were actually biting into a young-ish orange. The body is a light medium, with a very light moderate carbonation and a fluid feel. Overall, a pretty tasty hefeweizen, one whose slight addition of tartness and otherwise easy-going nature helps distinguish it from other American breweries' takes on the style.

Aroma is fruity apricot that hints at tartness, some muddled white wine notes.

Whoa, sour. Seems to be infected, tastes like tart peach or apricot, very thin and dry in the finish. It's puckering and somewhat one dimensional. Not a bad wild fruit beer, but definitely doesn't come across as a Hefeweizen. Berliner Weisse possibly. If you like Festina Peche, give this a whirl. Who knows if it's intentionally soured, guessing it's not on purpose, though its not entirely terrible.

Plenty of yeast swirling around in the bottle, but it makes an absolutely limpid pour, with no head--not even a slight film of foam across the top. Carbonation is terrible. Probably because of the flatness, there's hardly any aroma. If I put my nose about a centimeter from the top of the beer, I can smell a modest fruitiness. On tastes the flavor comes through a bit more clearly: light cloves, moderate fruitiness. Appropriate flavors, but no "zing" present. Mouthfeel: the flatness makes it terrible.

This beer is a bit like a beginning homebrewer's first attempt at hefeweizen... and probably they either under-kraussened it, or opened it too soon.

(on later edit: I've opened 2 more bottles of this, and each has been as flat as the first. I'm just chunking the rest in the trash. Knocking down the drinkability a couple notches because I'm sure I didn't just get an off bottle).

a: this is a murky yellow brew. virtually no head, very thin. cloudy and reminds me slightly of toilet water that has recently been urinated in...I once asked someone "what makes a beer look bad?"...this would be my answer...but I don't give it a 1 as I assume there still could be something worse out there.

s: the smell of wheat yeast...has a scent of fruit, banana peel maybe some citrus. a sweet smell to it. not a very strong scent though, very hard to get a read on it.

t: up front the taste is a bit watery (this is a light brew after all). However, to my surprise there is a very nice flavor in there in aftertaste. You get the wheat and some fruit and a sweetness that reminds me of sugarcane. not a strong flavor though. I give it a 4 not because it has better taste than some other beers, but because for a light brew, this is very nice. It's great for what it is.

m: very thin, not coating. Slides down which is nice and considering the pour yielded no head, surprisingly rich in carbonation. I've had better, but not too shabby...

o: this is good for a light beer, and I like wheat brews. Not as good as a regular hefe, but what else would you expect. Knowing what the beer is, it does it quite well. I could have several of these in a row and feel no remorse. I would recommend these to people who like wheats but don't want to get hit with a high abv (this is only 3.5). This is the best mix I've found between a craft beer and a light beer.

I have to say at first glance, smell and taste I thought this was a Wit. Pours a very, very murky yellow with creamy white head, no lacing, decent retention. Smell was of some yeast, spice, and a little fruit but a little on the sour side. Taste was a little bit tart with some fruit and slight bread taste, little lemon as well. Mouthfeel was very thin and watery. Overall not a beer I would revisit. I guess if they were going for a "light" hefe they definitely did it, just not that excited for that "style."

Wow...a light hefeweizen? I didn't even know they exisited. Well, it's a warm summers day in San Diego, why not?

A - Pours a hazy golden straw color with lots of visible carbonation bubbles sticking to the glass. There is barely any head, and it dies down pretty much instantly. No lacing to speak of.

S - Smells of lots of bananas, and cloves, and belgian spices. It ranks up there with some of the better hefes I've smelled. Very pleasant.

T - Kind of a watered down taste, but there are some spices and cloves mixed in with some lemon followed by a watery aftertaste.

D - It's not bad for a light hefeweizen. I kind of was expecting worse, but it's nice on a day like today.

The beer pours a slightly hazy straw color with a small white head. The aroma is bananas, wheat, pepper and something that smells just a little bit off. The flavor is bananas, wheat, lemon and cloves. Thin mouthfeel and medium carbonation. A decent beer, but it tastes about like a watered-down hefewezien, which judging by the label that calls the beer a "light hefeweizen," may have been what the brewer was going for.

Taste: The taste is very much like the smell. Honey wheat malts with a strong bubble gum taste. Some orangish citrus as well.

Mouthfeel: Thin to medium bodied with a good carbonation bite.

Weize Guy from Joseph James Brewing Inc.
Beer rating: 79 out of 100 with 40 ratings