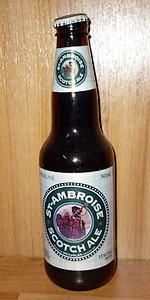 Taste: roasted malt, caramel, molasses. Taste like a scotch drink to me

Feel: Full body. Light to medium carbonation. A bit of a alcohol burn that for a 7,5 ABV but nothing too bad.

So overall would I recommend it ? Hmmm yes sure just nothing special.

Would I buy it again ? No for me it was not a easy drinking beer.

3.2/5  rDev -14.7%
look: 4 | smell: 3.25 | taste: 3 | feel: 3.25 | overall: 3.25
In the glass, St. Ambroise is a deep red color with leathery highlghts. The head is thick, dense, cream colored, and shows decent retention.
The nose is definitely thick and malty. My first impression is of a sort of caramel sweetness coupled with what smells like dates, raisins, and brown sugar. Hints of leather and damp earth provide depth. After leather and earth make their appearance the overall aroma seems to revert to its slightly alcoholic rum and raisin aroma.
On the tongue, St. Ambroise is rich, full bodied, and strangely dry in its overall mouthfeel. Flavors start off with rum and raisin, moving into a dryish nutty flavor. Then, the flavors revert to a slightly cloying, raisin tinted sweetness before moving into an oddly lasting, dry finish.
This Scotch ale was a little disappointing. The flavors and aromas were kind of mismatched and out of balance. The malt flavors were a cloying rum and raisin sort of sweetness. Lacking were the rich, leathery, quality caramel flavors of malt I usually look for in this type of beer. Too bad.

Reviewed by Alexc11 from Canada (QC)

S: Light malt aroma but not much going on. Not bad but nothing special.

This was just an OK beer.

Rated by LocalBeerGuy from Canada (SK)

Slightly sweet, but the malt is the main event. Perfumey caramel taste and maybe a little smoke. Bitter edge but no real hop flavor. Starts out mellow and ends with a back of the throat resiny sensation for the finish.

After a few sips I find I ma feeling kind of queasy. I"d never touch a Scotch Ale if they all had this fruity leaf mold dirtiness. From the 341 ml bottle purchased at the BC Liquor Store in Ladner, near Vancouver.

T- Full flavors of very toasty caramels, molasses and chocolate, tinges of smoke and char, burnt toast.....even woody and liqueur like to a point. I'm thinking there is a portion of black malt used to create this flavor profile! Right before the finish, there is an Earthy Sarsaparilla hint that lingers just slightly! Again....awesome!

M/O- Definitely full bodied and worthy of the 'wee-heavy' monkier! The carbonation is made up of 'wee' tight bubbles that greatly help with carrying the flavors all over the palate and this would be a great brew to enjoy with a stew & dumpling meal on a cold winters eve! I am greatly enjoying this one on its own however and think this is a great example of the style and highly recommend!

Reviewed by Bunman3 from Canada (AB)

3.74/5  rDev -0.3%
look: 3.5 | smell: 3.75 | taste: 3.75 | feel: 3.75 | overall: 3.75
I am a big fan of this style and I particularly appreciate this brewery. I've had a few runs at this particular beer and I keep wondering what I'm missing. There is a bit of head that disappears completely. There is almost no carbonation or beer-like appearance - perhaps I got a below average batch? The smell is pleasant enough - vanilla and some spice, plus the faintest hint of peat. This is not a bad beer, but there are plenty of better choices out there.
Jan 27, 2015
Rated: 4.43 by Tivlavrie from Canada (AB)

Reviewed by CalgaryFMC from Canada (AB)

3.99/5  rDev +6.4%
look: 3.75 | smell: 4 | taste: 4 | feel: 4 | overall: 4
I particularly love rich, sweet scotch ales and therefore came into this one with high expectations (doubly so in fact, considering that this brewery's oatmeal stout is excellent). Poured into an English pub glass, a dark reddish brown with two inches or so of light brown foam. Smells of sweet caramelized malts, brown bread, dark raisins, a cola-like brown spice, and a faint whiff of peaty smoke. However, the latter element is downplayed on the palate as compared to some other takes on the style, with toffee, dark dried fruit, and light molasses flavors taking center stage. Minimal to no hop flavor, as per the style. Moderately thick mouth-coating body and low level of carbonation, again hitting style targets. One can detect some booze on the palate but this is not overwhelming. Does have a subdued but detectable sourish campfire smoky "tang". Tasty and comes across like some uber-technical brewer had Ray Daniel's "Designing Great Beers" open to the scotch ales chapter in an endeavor to brew a Platonic ideal of the "wee heavy". Recommended.
Jan 24, 2014
Rated: 4 by RevCraig from Canada (ON)

3.93/5  rDev +4.8%
look: 4 | smell: 4 | taste: 4 | feel: 3.75 | overall: 3.75
St-Ambroise Scotch Ale may not be tartan, but this dense and dark candied cherry coloured beer looks hearty enough to withstand rain and windstorms and whatever else cool climate throws its way (it even manages some unlikely highlights). Its head, appropriately, stretches like a big grey cloud over the surface.

I like scotch in general, but I *love* Islay scotch specifically. Likewise, I like scotch ales, but my favourite examples of the style are those that capture the sea brine and peat notes that distinguish Islay single malts. This bouquet has just an inkling of those flavours but it's enough to add some additional depth (and make me that much happier).

The palate, however, is much closer to a Highlands scotch in its makeup. Peated malts fall by the wayside and in their place there's plenty of dark honey, dried fruits, butterscotch, vanilla, toffee, and roasted nut flavours. It's not a bad little ensemble, especially when you factor in the gritty earthiness contributed by the hops. Very well put together.

The mouthfeel is a tricky thing - syrupy on some sips, rich and malty on others with just the right amount of sweetness and campfire smoke. I don't know where I stand on it. One thing's for sure: 7.5% is a hard fact to believe. The beer is far heartier and more satiating than your average ale but is far from the heaviest hitter in the 'wee heavy' category.

It's hard to go wrong with anything that has 'St-Ambroise' on the label. While not all their brands live up to the world-class Oatmeal Stout, they are all solid, serviceable, and widely agreeable beers in their own right. Most of them - this Scotch Ale perhaps chief among them - are also great examples of their respective styles.