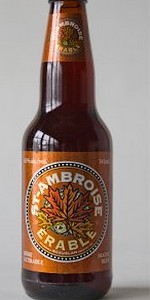 Notes: St-Ambroise celebrates the unique traditions Maple sugaring. With its combination of the best hops, crystal malt, roasted barley and real maple syrup from Quebec, it is the perfect beer for your next visit to the cabin. Cheers!
View: More Beers | Place Reviews
Recent ratings and reviews. | Log in to view more ratings + sorting options.

Reviewed by Shanex from France

Labeled as a « maple beer » from Quebec, Canada.

On the nose, maple and caramel notes

On the palate, syrupy and maple - no warmth of alcohol and fairly refreshing.

Overall: an interesting take on the genre and I liked it, a bit pricey considering the shipping here but worth it for a change.

Reviewed by Organdrew from Canada (QC)

Appearance: Pours a maple colored liquid which turns ruby-amber-cola when glass is filled. Not really any head, Noticeable bubbly carbonation.

Taste: Yum! Notes of maple and butterscotch immediately pervade the mouth. Which subsides to leave a bit of hop backbone noticeable. Almost coffee-like at times.

Mouthfeel: Lots of carbonation at first. More on the thin side. Not sticky or syrupy. Carbonation subsides quick enough.

Overall: It's an amber ale with mild hop backbone with strong and sweet notes of maple and butterscotch. Easy drinking, low IBU.

A real tasty treat. It's less on strength and complexity, but more focused on the maple notes, which is the highlight of the drink. Fairly well put together with no downside beside feeling a bit lighter than I like. I definitely recommend if you'd like to try something new. or need something easy to session. I finished a glass in 10 minutes it's so easy to drink.

I would definitely try again, but wouldn't put this on the top for the best beer, but good for those who like something sweeter and lighter.

Unfortunately they sell only in 4-packs in Montreal and at the same price or higher than 6-packs of other beers, but definitely worth trying.

Reviewed by Poljazz22 from Canada (QC)

4/5  rDev +7.2%
look: 4 | smell: 4 | taste: 4 | feel: 4 | overall: 4
Pours same color as maple syrup!
Smells like maple taffy!
Tastes like a red ale, lots of malty toasty flavors, maple syrup on snow, Nicely balanced English hops. This not a sweet belgian beer but a real maple tasting ale. The maple flavor comes back as a dry maple aftertaste.
A well balanced special maple brew from St-Ambroise. Well worth a try if you find it.

4.19/5  rDev +12.3%
look: 3.5 | smell: 4.5 | taste: 4.25 | feel: 4 | overall: 4
A- This pours a crystal clear copper color with perhaps maple undertones and has hints of orange/red when put up against the light. The carbonation is easy to see and rises to the top in an aggressive fashion....there seems to be plenty of it too! The head is relatively thin, but the dense looking layer retains well! The lacing is soapy looking and softly clings to the side of my glass!

S- There is a medley of dessert like aromas happening with this one....there are hints of delicious smelling Quebec maple syrup that has just been freshly tapped initially, with underlying tones of brown sugar, toffee/caramel, milky chocolate, nuts and yeasty toasted biscuits!!

T- The flavors follow the aromas rather well, with maple sugar or syrup being a very nice initial flavor to be detected....what I like about it is that is isn't super sweet or overpowering on the palate....it's rather clean in fact! There are lesser flavors of caramel, toffee, brown sugar and what I do notice is that the flavors all taste very natural and right on the end near the swallow, there is an Earthy woodiness about everything that cleanses the palate and rounds everything out! The finish could perhaps have mellow hop bitterness, but again, doesn't overpower any of the other things going on....wonderful!!

M/O- Overall this is a very nice Ale that blends sweet and savory characteristics together well! The maple added is just the right amount and I feel that this would pair up with a creme brule or with a chocolate caramel truffle dessert. The body leans towards the medium side of things and the carbonation is mellow overall. This is highly drinkable and I feel like it would appease most palates! Another job well done by this Montreal brewery!!

Rated by SenorBiggles from Canada (ON)

Rated by Pmicdee from Canada (ON)

A- Opens well and pours a nice 1" head that lasts for a couple of minutes before film out. Dark gold/light brown color and filtered clear

N- Hints of maple syrup is there. Not overpowering

O- Nice brew. Will buy again if I see it.

This very good blend went well with........ Bacon and eggs with you guessed it! Maple syrup!

Pours an intensely deep copper-crimson colour, clear in complexion and topped off with one finger of loose, soapy off-white froth. It wilts fairly rapidly over the next couple of minutes, leaving behind a thin, frothy collar; no lace or cap. I've had a handful of maple beers over the years, but none of them managed to capture the aroma of pure syrup as effectively as this one does. Beneath that layer of maple-y goodness, notes of demerara sugar, maraschino cherry, Medjool dates and toasted, biscuity malts come through, with some leafy, lightly floral English hoppage off in the background. Very enticing.

Yep, this one's a winner. It's quite malt-forward, particularly initially - with bready malt, toasted biscuits and some nutty notes interacting beautifully with the maple syrup flavour. Sponge toffee sweetness and mild hints of wood are next in line, finishing with some leafy, floral hop notes - similar to what I found on the nose, but not as pronounced here, as the maple and malt bill tends to steamroll the hops. Lingering maple flavour in the aftertaste, along with some nuances of toasted nut. Medium-bodied, with moderate carbonation levels that result in a crisp, exceptionally smooth mouthfeel. This is a flat-out delicious beer that I find extremely quaffable, despite its relative lack of balance.

Final Grade: 4.07, a solid A-. St-Ambroise Érable is almost definitely the best maple-themed beer I've yet had the pleasure to try. If you're curious about this one because you're a syrup fanatic, then rest assured - the maple has more than enough oomph to satisfy you - but not so much that it is liable to become cloying to those outside of that camp. This is a superbly sessionable amber ale; one that deserves to be brought into this province every spring. Absolutely worth a try - McAuslan rarely disappoints, and this brew is no exception.

Reviewed by VbolieuV from Canada (QC)

4.01/5  rDev +7.5%
look: 3.75 | smell: 4 | taste: 4 | feel: 4.25 | overall: 4
Nice amber in color with a small white head that quickly leaves only a thin layer on top. Smell of maple syrup, caramel, sugar, definitely smells like a maple shack. Nice caramel taste in the beginning that quickly transforms into a maple syrup flavor. It's really smooth in the mouth and the maple taste stays for a while on the tongue and even in the throat. I've tasted a few maple beers and I'd say this one is the best. It has a nice maple flavor while not being too sweet like most other maple beers are.
Apr 23, 2014
Rated: 3.75 by deleted_user_127363 from Canada (QC)

Reviewed by SebD from Canada (ON)

Smell: The aromas definitely give out hints of maple syrup, caramel, slight toffee and biscuity/nutty malts.

Taste: Like the aromas, it has some sweet maple syrup, caramel/toffee, biscuity malts and a slight breadiness.

Mouthfeel: It has a med/high carbonation with a nice overall balance and feel although it is somewhat light.

Drinkability: It's a very smooth drinkable beer accompanied with decent flavors and aromas.

The bubbles are moderate in strength, and a bit tight beyond their basic frothiness, the body a decent medium weight, and generally smooth, with a suggestion of an echo of creaminess. It finishes off-dry, the caramel malt more culpable for the lingering sweetness than any loitering maple tree notes.

A pleasant enough maple beer, the guest ingredient let free to be its more or less natural self, on top of a pretty solid amber ale. The combined sugary essences might limit me to just the one for now, but I'm pretty sure I'll return to this soon enough.