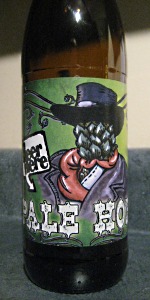 This beer pours a slightly hazy, medium apricot amber hue, with three fingers of puffy, tightly foamy off-white head, which leaves some decent spackled lace around the glass as it quite slowly dissipates.

The bubbles are a bit peppy up front, and ride that ticket for a long while, the body a sturdy medium weight, and actually a fair bit smooth, despite the persistently sassy hops. It finishes mostly dry, the fruitiness of malt and hop alike finally forgoing any sugary aspirations.

A rather pleasantly hoppy APA, though the hop schedule (Amarillo, Centennial, Simcoe and Chinook) seem more redolent of an IPA. Anyway, borders were drawn to be crossed, so while this purports to be one thing, it could easily qualify as another. At any rate, drinkable, and enjoyable, especially for yer average hophead.

3.78/5  rDev 0%
look: 5 | smell: 3.75 | taste: 3.75 | feel: 3.25 | overall: 3.75
L:
-pours a cloudy golden-orange with a medium to big,foamy,offwhite head
-high carbonation visible
S:
-grapefruit,orange,resin,papaya,mango,honey,bready
T:
-Follows the nose plus pine & white pepper
-medium bitterniss for the style
F:
-light body
-medium carbonation
O:
Very good one.
This was at the very end of it's (generous) BBD and it still held up.I can only imagine it's even better fairly fresh.