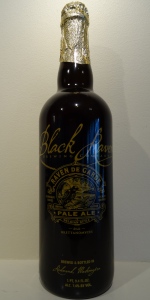 12oz foil-wrapped bottle purchased at Huckleberry’s in Spokane for $6.99. First time I’d seen it – Black Raven in general has only recently shown up in my neck of the woods. According to the label this is a “Pale Ale” brewed “Belgian Style with Brettanomyces.” I thought a Biere de Garde was a French style. On the back of the bottle (which doesn’t seem to have a freshness date), it does say it’s a style from northern France, but the front says Belgian. Seems this beer has an identity crisis.

Opened with a resounding “pfft!”, when poured into a snifter from Iron Goat, this was a mostly clear or slightly chill-hazed (depending if you’re a glass half-full or half-empty sort) copper, with a moderate-sized beige colored head that dropped quickly, leaving a thin foam collar. A quick flourish of the snifter recreates headly things, but said head disappears again just as quickly. Streaky, spotty lace is left on the sides of the glass ever so briefly, then slides back down into the beer, leaving no trace.

Malty and fruity in the nose, with a slight whiff of sour funkiness. It’s not unlike some glasses of white wines I’ve sniffed.

Not that much going on, flavor wise, and what’s there isn’t that great. It’s like a slightly unpleasantly tart and slightly fruity blonde ale. In addition to the vague similarity to white wine, it’s also a bit like tonic water. In his review, Draheim refers to a crushed aspirin-like quality. I concur. There’s definitely a chalky-dry medicinal thing happening that seems to dominate things. The flavors seem to balance a little bit better as it warms, but not by much. Things still don’t meld together all that well. The finish is bone-dry and bitter.

Medium bodied, with both a slightly sluggish level of carbonation AND a crisp, dry mouthfeel. Weird.

Aspects of this beer are interesting, but the overall end-product is underwhelming. Everybody on the west side has been raving about Black Raven since practically day one, and I’m mostly not getting it. Maybe what’s finally being distributed here was sitting in a warehouse for a while

into an imperial pint from a single
a: rosy peach with 1 finger off-white head
s: faint bretty musty hay, pear, light mandarin, yeasty pepper...combination of the Brett and the dry hopping did this one right.
t: like the nose at the very start, then some more toasty and biscuit notes as well as some crystal malt in the front to middle, and it finishes with some decent brett that is well-integrated into the other flavors (including an interesting blend of hops that I didn't pick up as well in the nose); pretty dry. Nice use of Brett...not entirely sure I would guess the style if I was tasting blind, but regardless, it's nice and interesting.
m: pretty light and dry, well-carbonated, some prickly hops...wouldn't guess the abv.

Poured from 375mL bottle into a tulip.

Appearance: medium golden hue with a light haze and a moderate effervescence. Head in a thin layer of frothy ivory foam. Not too bad.

Smell: lightly tart with just a dash of grassy funkiness. There's a very light toastiness and a little sweetness to the malt; it's a tiny bit light but still a very well-composed aroma.

Taste: very mellow, but I really like the composition. Flavors are lightly toasty, a hint of sour/farmhouse and a surprisingly thorough bitterness at the end. It really works for me.

Mouthfeel: medium body with a good carbonation and a decent creaminess that is just a tad rocky. Still, very enjoyable.

Overall: this beer rather appeals to me. The bitterness gets to be just a little rasping, but I kind of like its juxtaposition to the regular bière de garde character.

Taste is likewise a blend of pale bready malt and fruity esters from the Brett yeast. I'm picking up a crushed aspirin quality I've detected in a few other Brett beers. Has a nice vinous quality too. Floral hops give it a bitter finish. This could be classified as a saison. Earthy.

Overall a decent Belgian pale/Bière de Garde but the crushed aspirin taste detracts from the overall.

Poured into a Black Raven pint glass. Pours a medium burnished golden amber with nice active carbonation and a fine white head with good retention and lacing. Head continued to slowly grow for minutes after the pour. Aroma of sweet bready malt, light brett, light fruit and citrus hops. Flavor unusual with dry light fruit and brett up front, but lightly toasted and bisuit malt and hints of light pear juice developing in the middle before finishing with a more standard bretty, semi-dry farmhouse beer finish with moderate hop bitterness. Medium bodied with pleasant peppery carbonation. An interesting hybrid between biere de garde and a lightly malty pale ale which worked for me. I think the level of brett would have been more than I prefer in farmhouse beers except it is nicely counterbalanced by the malt in the middle of the taste. I liked this, which is uncommon for brett conditioned beers; I usually prefer just a touch of brett. Black Raven continues to amaze.

A - Pours a clear golden-dark orange with a 1 and a half inch cream colored foamy head with good retention.

O - Smells fruity and nice, but tastes earthy and dirty. Dry, and dissapointing.