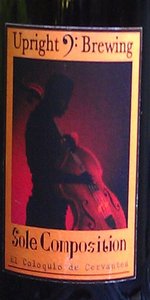 "The anniversary beer from Upright Brewing is... a barrel-aged dark rye saison with raspberries. More specifically, it's "a blend of Upright Six, Upright Eight, and raspberries barrel-aged with wild yeast. If you're wondering what Upright "Eight" is, it's a batch of the Six that was fermented with a different yeast strain that fermented over the top of the open tank, losing wort and finishing at a much higher gravity."

I'm assuming this must be a left over keg from last year's event. Sampled at the 16 Tons cafe the other day.

The pours a reddish brown color with pretty good head retentionand decent lacing. These is pretty attractive in this one, as I pick up considerable blackberry, grape, black cherry, vanilla, wine and light sour. The flavor profile generally replicates the nose, but the sour component really takes center stage in this one. Still, while the sour flavor is enough to make my mouth pucker, there's still considerable fruit and vanilla to keep it from becoming completely overwhelming (though it's a close thing). This beer would definitely bring a smile to a sour lover. Mouthfeel is medium bodied,, with a long, slighty spritzy, sour finish. Alcohol is not very prominent or noticeable in this beer, though I'd guess it's up in the 7% to 8% range.

An interesting beer, but I'm just not enough of a sour lover to properly appreciate it. Still, I'm glad I had the opportunity to try it.

Huge thanks to raveskdr for a bit of this one. Served in a mini snifter. Pours a purple-copper color with a short off-white head. The nose carries really nice notes of raspberry and blackberry along with a fairly-heavy lactic acidity. Slight bit of earth and funk. Flavor is similar with a fairly-strong acidity. Great berry presence. Touch of funk and rye. Medium body. Dry. Quite delicious.

Got this one in a trade. The blend just sounded...complex. Poured into my FFF Teku. Bottle 77 of 120.

A - Mahogany brown with a slight, off white head.

S - Sweet, juicy, ripe raspberries right up front. On the back end there is a hint of rye.

T - There are a tons of raspberries as soon as you take that first drink. There is a slight funkiness and a nice, dry finish. With how heavy the raspberry was, I assumed it would finish too sweet. Not the case.

M - Lots of spritz up front. Good, medium body and yet is still very light on the tongue and very drinkable.

O - Yet another winner from upright. These guys really do pretty much everything right. Glad I got my grubby little upright-fanboy hands on this one.

The final of the three Six variants we tried at thetomG's place. Served in a 3 Floyds tasting snifter.

A - Looks like Lambicus Six, but with a tad less foam and a slightly darker hue. Make sense, seeing as this is probably a bit higher in ABV.

S - You can definitely smell the raspberries here, and the heftier malt bill of the 'Eight' stands up the barrel-aging better than the other versions. Still vinous and oaky, with some nice lactic notes as well.

T - Taste is a bit of a letdown. Berries and lactic acidity, but somewhat dull and lifeless compared to the aroma. Nothing wrong here, but lacking in depth and intensity.

M - A bit more alcohol presence than the other versions, and a bit more prickly carbonation as well. Dry and oaky texture with tannins in the finish. Definitely medium-bodied.

D - Enjoyable, but lacks a bit in depth compared to the Lambicus. I'd have it again, but it's nothing something I'd actively seek out.

Pure luck that our roadtrip to Eugene to visit nurseries fell when 16 Tons was having their anniversary release of El Coloquio De Cervantes! Had it on tap and lo and behold, there's a case of it just sitting on the bar for the taking. Place is packed and people aren't grabbing them up. Go figure. Maybe they already got their limit one each. Wife an I each got one to put down for at least a year. Will make a nice contribution to some future bottle share. Too precious not to share.
Eight ounce pour into a sixteen ounce glass. Looks funny that way but that's how they did it at 16 Tons. Sits dark, somewhat flat looking in glass. Initial flavors deceivingly subtle. Only later does the raspberry flavor take over - with a vengeance. I got through this one OK but when I repeated the experience later at Upright in Portland, it overwhelmed the senses and was a bit much.
Yet, if you like the style, this is a must try if you get the chance.
Update 4/1/2014: Broke open a bottle. Incredibly nice. Has smoothed out significantly since its release. Raspberry dominates of course but very smooth unlike before. Delicious.

I wasn't able to get one of very few bottles of this stuff (&lt;10 cases as I understand ~ most of which went to Eugene for the 16 Tons event), but I did get to try this one-off beer on two different occasions over the past two weekends. Both times were at Upright's tasting room, and both were 12 oz. pours.

A: Served as a murky cocoa-brown, barely any head - just a thin skim, a slowly rotating star-shaped sheen and some light froth at the edges. Off-white suds lead to droopy lace banding. Held to light, plenty of small carbonation shows through the cloudiness.

S: A complaint with Upright is that often their taproom beers are poured colder than I'd like. This detracts from beers with subtler nuances, such as fruit-laced wild ales. I wrapped my hands around this glass for a good 5 minutes before any real scents started to develop - when they did, this is aptly musty and earthy, with a fleeting woodiness and ample raspberry aroma.

T: Love the tartness: a nice, refreshing lemon-lime upfront which leads, over a few minutes, to vibrant raspberries. In between the woody character of the barrel softens and deepens what could have been a harsher fruit tang. It's all kind of earthy, with a mouth-watering ripeness that begs for another sip.

M: An unfiltered mouthful, full of graininess and a yeast. Some tongue-curling action - tart but not domineering - and then a prolonged finish. Raspberry tang shines here.

O: A very likable beer, one I suspect is bigger (see description above) than it drinks, although I could never get a definitive answer when I asked about the specs. Wish I'd have found a bottle to see how this developed over time because the draft stuff served in the week+ since its release seems to be quite good. Worth seeking.