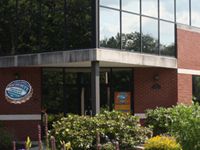 Haven’t been here for years. Expansion has created a nice space. Service was great, not crowded for a Friday afternoon. Love the airstream bar. Bartender I had was quick, friendly, and knowledgeable

Didn't take the tour, but stopped in for samples (12 on tap) and to purchase the really big quart cans go-to. I.e the crowler.
The tap hostess was very nice, well informed and talkative, making us feel very welcomed. The samples flowed, as four of us tried each offering plus!.
I chose the Pilsner for my take home, which I thought was a spot on traditional style offering.
The gift shop was full of goodies and brews that are hard to find.

Went to the brewery on 7/11/15 since I was in the area. The area is literally in the middle of nowhere, but once you get there the place was nice enough with a pretty good crowd drinking on a Saturday afternoon. Vibe was mellow as a lot of people were in the tasting room trying samples and filling growlers, and to me most seemed like locals who visit on a regular basis. Some beer geeks mixed in who were analyzing each sip, but that's any brewery now a days. They had at least 8-10 beers on tap and a good selection and representation of what they brew.

I had heard good things about Larry so I expected some pretty good beers here, so once I started having samples I was rather disappointed. Larry was OK at best, the regular IPA was average and the Green Monsta IPA was the tastiest offering IMO. I bought a can and a bottle to go on the way out so I could taste some of the regular lineup, but Larry was a big let down...at least on the day I went.

Service was good. They had 3 girls filling growlers and serving samples, 2 quite nice and 1 just not the type of attitude I'd expect at a brewery. They were attentive enough, and were quick to fill the "Wicked Big Can", which is a 32 oz can growler by Ball Corp. that they seal right there at the brewpub bar. The "Wicked Big Can" made the trip worth it, I thought it was a great concept and a nice new spin on buying fresh beer. Hats off to Wachusett for the originality - the "Wicked Big Can" was inexpensive and will stay fresh longer than a growler.

7/9/2016: Went back to the brewery and the tasting room was more lively and like a bar, plus all the beers I sampled were good - especially the milk stout. Larry is still underwhelming to me, but all the other IPA's are solid, with Green Monsta remaining at the top spot. I increased the vibe score to 3.5. Service was much better this year, so that score goes up from 3.75 to 4 as well. Selection also moved up from 4 to 4.25 since they had a nice variety again and added a cask or special release beer.

Can't beat free tastings! Tasting room is kind of small and is standing only. Seating is only available for the first few minutes of the tour. Still totally worth it. Wachusett beers are classic in New England.