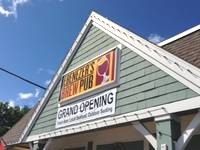 good food. somewhat limited beers for what i was expecting. still solid offerings. we ate in the cozy bar area. trivia night was a lot of fun, the host & crowd were welcoming.