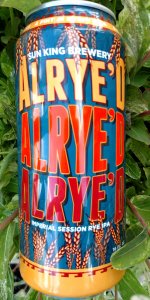 I had this a couple of times in June 2017. Once was on a flight at the local HopCat and the other time was a can. I rated it better on draft, which isn't unusual, but found the can a little light on the rye. It is apparently labeled an "imperial session," which doesn't really sound like a thing.

It's been well documented by alcohol scholars that rye has no place in brewing and distilling. But those historic scholars have never had rye with hops. The use of the persnickety grain in a classic American IPA makes the beer better than just alrye'd.

Typing this review in my most Mathew McConaughey, Alrye'd Alrye'd Alrye'd glows with a honey amber hue that' woven into a modest hop haze. Building a rich and frothy cap, the beer leads with a peppery, earthy, citrusy and freshly roasted nuttiness. Sweet on the early palate, those notions of honey continue along with a biscuity maltiness of caramel and granola.

In a role reversal, the sweetness soon turns the flavor over to hops. Citrus flavors rise with bold suggestions of pink grapefruit, orange and an overall marmalade character. Evolving into a peach and apricot flavor, the earthen grit of rye comes with an overall soilish taste with a husken bite. A peppery zing comes with the late palate ahead of a resinous hop flavor that's redolent with pine and potpourri.

Medium bodied and retaining a moderate level of sweetness, the beer's balance and texture is part that of IPA and that of American strong ale. Finishing both bitter and spicy, the raw and rustic rye gives the hops a dynamic and strong character that they cannot achieve on their own. Lingering into a woodsy, grainy aftertaste seems like a determent, Sun King masters this grain in beer for a taste that has us wanting more.

First had this 6.10 ABV rye beer at Rockstone Pizzeria & Pub/Sahm's Tavern, Indianapolis, poured from pint can, stamped "13APR 17," into pint tumbler. Before I caught on that an "imperial session" IPA is just an IPA, I thought there was a surprising number of complementary flavors packed into this beer. In fact, it's just a very good American IPA with a confusing subtitle.

Pours a very light golden color with a thick bubbly white head that dissipates almost instantly. Some spotty bubbles are left around the outside of the beer.

Smell is very light and mild with notes of lemon, lemongrass, rye bread and a touch of spice on the back end.

Taste has notes of spicy rye, lemon, lemongrass, grassy hops with a spicy bitterness. This is surprisingly very mild for a rye beer.

Overall this is a fine beer - not one Id drink again.

Poured from the can into a nonic pint glass. Canned March 24th 2017 Cheers!

Hazy and pale yellow body color with a bit of solid glow to it. Head creation is a foamy three fingers tall, very bleach white and bright looking. Head is very shampoo soapy like in quality, with a thick dissolve. Clumpy leaving puck after it settles.

Aroma is pretty solid. Tropical notes of guava and pineapple like sensations, and a good sweetness. Gets into some lemonade like qualities interestingly on the nose as well.

Decent palate. Good quenching body and flavor, with an excellent somewhat flour like malt bill, but a good thick lemon and pineapple flavor in the mid palate. Minimal bitterness in the aftertaste, and very little notes of spicy rye character throughout the beers flavor. Slightly dry and tannic finish, but more fruit character makes for an enjoyable palate.

Had on-tap at the Yard House in Indianapolis. Poured into a pint glass.

S: Citrus, spice, rye, hint of dank, tangerine, and a possibility of mushroom.

T: Rye and citrus lead the palate in definite layers. There is a hint of fresh dark rye bread, some strong citrus notes, a trace of earthiness. A nice interplay of rye and citrus lead to a lingering bitter finish. The bitterness is medium high.

T - Has an IPA herbal bitterness with a low malt base. No noticeable rye spiciness. 3.5

From a can into a pint glass

Pour is straw yellow with some haze. One finger of nice foam and some sticky lace left behind.

Smell is a bit dank with pine hop aroma and some hints of spice.

Taste is nice and bitter with rye malt as a back bone. Very simple and nicely balanced.

Feel is medium with good carbonation. Goes down smooth and has a lot of drinkability. Nicely done!

I had a friend pick this up for me at Sun King since they don't sell it in the Minneapolis market. I poured it from a 16 oz. can into a clear teardrop glass. I'm not particularly an IPA fan because of the usual bitterness, but I'll have to say I really like this one! It is very bitter, but the difference is that the bitterness is a lot less noticeable with every swallow, and there is no bad aftertaste. It pours a straw yellow with a one finger white head. I've had three of Sun King's beers now and am totally impressed. I will have my friend pick up more for me. Good stuff!

Tasty and easy drinking, with a lemon tea aspect, nice spicy back end, and a clean finish. Surprisingly refreshing, I'll be watching for this in future years.

Appearance is bright straw to gold with slight haze and a short-lasting white head. Aroma and taste are spicy, citrusy, piney, and dank. Definitely taste those crystal hops and rye malt. Mouthfeel is slightly thin but overall, a very refreshing and drinkable offering.