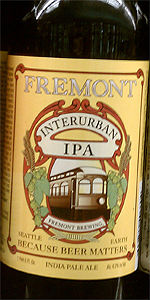 Notes: Named after Fremont’s most famous outdoor sculpture, Waiting for the Interurban, Interurban India Pale Ale offers the adventurous beer lover a warm embrace of Northwest Pale malt swirled with a hand-selected blend of Chinook, Centennial, and Amarillo hops. Interurban is bitter as an IPA should be yet balanced with copious aroma and flavor hops.

Was looking forward to trying this beer because of the hop profile. Cascade, Chinook, and Amarillo in an IPA are a winning combo in my book. This beer is good tasting. Bought a 6 pack of 12 oz. cans. The good is the overall taste. The bad is that it's a tad too heavy in the body making it a heavier drink than it needs to be. The lingering hop bitterness is a little too forward as well. Noticed quite a bit of yeast debris suspended in the glass. Drinkable, enjoyable, but imperfect.

Draft: Poured a golden color ale with a medium size white foamy head with good retention and some lacing. Aroma of citrus hoppy undertones with light bitter notes. Taste is dominated by citrusy hops notes with light malt presence with some bitterness noticeable in the aftertaste. Body is about average with good carbonation. Highly drinkable west coast style IPA.

Golden hazy with moderate carbonation and a finger of yellowish head.

Tastes of pineapple, malt, and a hint of grapefruit bitterness.

A thanks to the incredible woodychandler for this beer. Poured from a 12 oz. can. Has a golden/orange color with a 1/2 inch head. Smell is of peaches, some sweetness. Taste is pine, peaches, malts, light citrus, moderate bitterness. Lots of flavors working somewhat well together, but not in perfect harmony. Feels medium bodied in the mouth and overall is a pretty good beer.

Poured from the can into a Spiegelau IPA glass. May 9th 2018.

Classic old school, and great solid hop nose. Hints of light pine and frosty mint like earth tones. Crispy caramel malt, almost like thin toffee that gives a nice sweetness and good break in your mouth. Excellent balance too between malt and hop.

Wonderful palate. Grassy touches of herb hop and malt crispy flavors on first sip. Treacle and light crispy brown sugar hit the tongue, and a nice finishing lime like bitterness. That excellent play on malt and hops is so nicely balanced between sweet and bitter so nicely, with excellent rich malt body that doesn't ovepower yet still compliments tremendously.

Wonderful IPA, reminds me of a West coast version of 60 minute, maybe even better! Blasphemy! But I win either way.

On tap on another boat! Poured a clear, golden yellow color with a small, white head of bubbly foam. It smelled dank with OJ and piney notes. Sweet toasted caramel, orange peel and piney bitterness.

I recently signed up for Tavour's service & although it is a flat shipping rate, I just CANnot seem to pull the trigger on most of their offered bottles. CANs, on the other hand, get snapped up as soon as they are listed! I am not a greed-O, however, and if as few as one (1) is available, I get it. If the minimum is two (2), it is still okay as my local, in-person trader, tone77, will get the other one, plus I get his spent CAN back FFT Jeff Lebo's CAN collection. It all works out.

From the CAN: "Because Beer Matters"; "Pack It In Pack It Out"; "We are a family-owned craft brewery founded in 2009 to brew artisan beers made with the best local ingredients we can find. Named after Fremont’s most famous outdoor sculpture, Waiting for the Interurban, Interurban India Pale Ale offers the adventurous beer lover a warm embrace of Northwest Pale malt swirled with a hand-selected blend of Chinook, Centennial, and Amarillo hops. Interurban is bitter as an IPA should be yet balanced with copious aroma and flavor hops. Fremont Brewing brews beers of distinction ... Because Beer Matters!"

I Crack!ed the vent open & despite being within the brewery's suggested 90 day timeframe, I went with a slow, gentle Glug, followed by an in-glass swirl. This resulted in just over two fingers of dense, foamy, rocky, tawny head with good retention that left sticky lacing in its wake. Color was solid Amber (SRM = > 7, < 9) with NE-quality clarity. Nose had a pine resinousness along with an earthy maltiness, underlain with a citrusy pithiness. Mmm! This put my hophead mouth to watering. Mouthfeel was medium, but nicely carbonated, giving it a spritzy cleansing quality on my tongue. The taste was just in the sweet spot for an AIPA, IMHO. It was right on the cusp of being too bitter without falling over the side. It was more toward grapefruit & lemon, but less juicy than pithy or rind-like, zesty, if you will. I still got the piney woodiness & the malt was both earthy & biscuity. This was a very dry, quite bitter, extremely tasty example of the style. Finish was dry & I was left contemplating its various flavors, especially the citrus. I am just not sure that I would want a steady diet of this one. Hmm. YMMV.

Cans of this are becoming my go to. Tastes and feels strong but notes of brown sugar keep it nice. Like other beers from Fremont, I notice that it is easy to drink like a microbrew while being heavy enough that it is a bad idea.

Pours about a half finger of white head into my can-style glass. The head is small, but it looks fine; though, I can hear it fizzing. Dark orange in color, somewhat hazy. Decent amount of bubbles coming up. Overall this looks ok so far.

Nose is pretty hoppy. Primarily a bitter, piney hoppyness. Sweetness is noticeable, and just slightly above average. Not a whole lot else going on here, maybe a tiny bit of grapefruit? Pretty simple. Overall not a bad nose, a touch sweet for my liking.

Yeah, just a tad too sweet here. Almost tastes like honey, which is nearly impossible to be intended. But who knows, maybe honey malt is big in Seattle. Bitterness is noticeable as well, but not very complex in its flavors. The honey is actually kind of nice here - there is a little stickiness from the sugars, but not much compared to some IPA’s. Overall this is fine, but not too much to write home about.

The mouthfeel here is nice. As already mentioned, the stickiness is not too bad. It has a pretty lively mouthfeel - the carbonation is medium, and the bitterness is there, but only lingers briefly.

The drinkabiltiy is very high. It’s not a perfect beer, but it’s tasty and easy to put back.

Overall this is an ok brew. Really standard, I can see why it’s one of their flagships.

The appearance turned out pretty mediocre. The lacing was spotty to say the least. The head was, eh. Overall, nothing amazing.

Orange and pine aromas, but tasted spicy hops the most. Pretty smooth balance of hops and malts other than that.

Body is a bit thin for my taste but a solid beer overall.

Fresh from Seattle. The pour is a pale amber with a slight haze, citrus aroma and a bit yeasty. The taste is pretty much on-target west coast IPA with a little less body. The label says it's a 'session' beer but at 6.2% ABV, that's above our range.

A good, if not spectacular beer. Well-crafted and worth having a sixer or two on hand.

The appearance had a light hazy yellow somewhat golden color; light carbonation is seen rising, half fingered white foamy head slowly dies and leaves a decent amount of clingy lacing. The smell had some light bitter hops - somewhat citrusy yet smooth; malts do present themselves fairly well. The taste was a bittersweet througth the malts and hops, combined nicely, light malty sweet citrusy aftertastek quick dry finish. On the palate, it sat at/about a light to medium on the body, somewhat sessionable. Carbonation is good for the style and for me. Overall, this was a good AIPA that I would have again.

Yes, a Northwest Style IPA. But of a steady, consistent quality. It's a "go to" IPA for me when one is NOT feeling adventurous or buying 6 or 12 pack to share. A solid, tasty IPA.

my first thought from this brew was, "this reminds me of the IPAs my father would drink". classic northtwest hops lend aromas of hay, lemon, and grass. hints of caramel and biscuit malts on the palate, with significant bitterness in the back. solid mouthfeel for a 6.2% abv.

Both this beer and the Citra IPA are American IPAs. Nobody likes to be compared, but the Citra IPA is so much better in my opinion just purely from an aroma and smooth mouth feel. 3.5

Pours apricot color; surprisingly generous, creamy head.
Smell is bready.
For an IPA, taste is influenced more by the maltiness than the hops (Chinook, Centennial and Amarillo. per brewery site). 75 IBUs ? Don't think so.

Relatively light on the booze. This one is a good 'change-up' IPA...a re-introduction to malt for extreme hopheads.
Enjoyable brew (Disclosure: I'm not a fan of Seattle anything).

for a 7% abv Citra single hop ipa this brew is surprisingly well balanced and also perfectly malted. Not getting the bitterness referred to in other reviews, rather I'm finding a very well balanced, non-bitter taste profile with the malts providing superb balance. I am lucky to live in Oregon, therefore this Oregon only offering was pretty easy to find. Good (actually excellent) job Fremont!

I almost always dig on an ipa that comes out looking like a hybrid color of an orange and a lemon. This one drops 1/2" white head on top of that color scheme. Aroma was orange, pine, unsweetened caramel.

Absolutely lacking in innovation, but absolutely nailing the standard for which makes the American ipa: good hopping, less than enough malt to keep it purposefully out of balance, more than just bitterness, drops tree and citrus notes. Not overly bitter, not one dimensional. Canned now too. For the win. I like to have this at least once each year.

Pours a light Amber color. Aroma is malts with some pine hops and sweetness. Flavor has some light hippiness up front followed by a sweet malty finish. Mouthfeel is so loud and overall this is just an ok IPA.

A very nicely put together IPA. Clean blend of pine driven hops with enough of a backbone to keep things ticking over nicely. Bold but balanced. Fine bitter aftertaste

Pours slightly hazed golden amber with a lasting head that leaves patches, then rings, of lacing down the glass.

The smell is tropical/citric, some pine and a dash of black pepper.

The taste is of grapefruit/orange/lemon/mango with a bit of pine and herbal notes. Supported by caramelized bread. Peppery, fruity, floral bitter bite in the finish.


Interurban IPA from Fremont Brewing Company
Beer rating: 86 out of 100 with 560 ratings