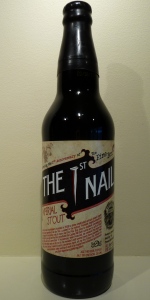 Notes: We are a family-owned microbrewery founded in 2009 to brew small-batch artisan beers made with the best local ingredients we can find. Located in the historic Fremont neighborhood of Seattle, we taught the horseshoe crab to swim and the Pine Box boys to explode stereotypes with their minds! A year ago the Pine Box redefined the Capital Hill beer scene and in a fit of bad judgement, they asked us to brew their 1st Anniversary beer. Honored, we created this Imperial Oatmeal Stout with depth and secrets not to be revealed until several years have passed. Pale barely, smoked barley, brewer's licorice, cinnamon bark, oh my my. Enjoy this tribute to determination, vision and hard work of a couple beer-obsessed gentlemen and their legendary gathering place.
View: Beers | Place Reviews
Reviews: 10 | Ratings: 66 | Log in to view all ratings and sort

Catch up rating from last night. First in a line of many imperial stouts. Color and pour normal, silky smooth body, up front ABV and following burn. Body right on for an oatmeal stout.

Probably my favorite beer of those that have never graced a barrel. Certainly my favorite dark beer of that kind. The cinnamon, licorice, and smoked barley are neither subtle nor in any way heavy-handed. They simply play off each other in a dynamic, delightful way, and make this beer, with the rest of the base, satiny-smooth despite its heft. It's not at all hard to imagine why the BBA version of this, the Rusty Nail, is so revered. Having had this one, I revere it.

On tap at Beer Authority. Pitch black, big dark brown head. Sweet, spicy and big. If it was more readily available, I'd have one for breakfast instead of coffee.

Tried this beer several times at the Washington Cask beer fest, so I feel as if I have a pretty good handle on what it's like. Served from what looked like a 5 gallon pin/firkin.

The beer pours a blackish brown color, with the consistency of motor oil. It's maybe not quite as viscuous as dark lord, but it's close. Head retention is fairly decent, and lacing is very light. This is a beer that appears to have seen some serious barrel aging. The nose displays considerable licorice and vanilla (which is to be expected I guess), but with some underlying bitter dark chocolate and light coffee as well. The beers smells pretty good, but the palate; holy mother maria!!!! This beer comes across as liquidified licorise, but with considerable vanilla, dark chocolate, cinnamon and light coffee as well. There's also a roasty, smoke quality to this beer as well, that I didn't immediately pick up with the first glass I got. I felt the smoke quality helped to balance the richness somewhat. The beer is definitely rich and sweet, and so it's pretty hard to imagine drinking a whole lot of this. On the other hand, the low carbonation works well with this beer, making for a very full bodied beer, with a very long, licorice infused finish. Alcohol is noticeable, but even so, I was a surprised when I saw the abv. was in the 12% range. The alcohol is really integrated very well into the flavor profile.

Wow! This beer is quite the mouthfeel. Another impressive effort from the folks at Fremont Brewing.

APPEARANCE: A black pour yields a small, medium looking, dark tan head with decent retention. Head fades rather quickly to a half swirly wisp and ring. Black body with higher levels of carbonation for the style. A ring remains until the end but leaves no real lacing down the glass.

SMELL: Lots of dark chocolate, roasted malts, molasses and dark caramel. Baker's chocolate, a touch of licorice and the cinnamon really comes out as the beer sits, giving it a bit of a spicy touch. This is really well balanced and quite enticing.

TASTE: Roasted malts with cinnamon and light fruity flavors, like grapes and raspberries, doused in a flood of dark baker's chocolate. This must be a result of the added licorice. The fruity combination with the cinnamon makes the flavor quite different than the nose initially. A boozy, spicy and fruity finish with roasted flavors, cinnamon spice, touches of licorice and bitter dark chocolate lingers nicely on the palate. Quite different than the nose had suggested, but quite flavorful, well balanced and decadent. Really good.

PALATE: Fuller body with medium levels of carbonation. Very creamy and smooth, goes down smooth with a bit of a bite at the swallow and finishes sticky on the palate. A touch of heat lingers.

OVERALL: This was excellent. The cinnamon and licorice in this one gives it a fruity, spicy element that really sets it apart from others in the style. The oatmeal helps too, making this a full and creamy stout for sure. While this one doesn't include chilies in the recipe, the cinnamon and roasted, chocolate flavors puts this one in the same realm as Hunahpu perhaps. A quality, quality beer that I'd gladly drink again. Thanks again for sharing Doopie!

Note: Had this one again last night (8-12-2015) and it is still every bit as decadent as it was two years ago. Thanks again Doops!

Aroma is loads of cinnamon, nutmeg and roasted malt. Bitter, sweet, spicy and earthy all at the same time.

Taste follows nose. Tons of bright peppery cinnamon tempered by the deep dark roasty malt. Vanilla and nutmeg too. I can only imagine what this would taste like with a scoop of vanilla ice cream. Good thing I've got another bottle.

Mouthfeel is thick and viscous, but not syrupy. Despite the lack of any real head there's plenty of carbonation here to keep it relatively light on the tongue.

Overall, here we have another home run from Fremont. 22oz might be a little too much of a good thing, but without a doubt it's a tasty brew.

HUGE thanks to libbey for this one...

A: Pours a deep dark black with about a half a finger of dark tan head. The foam fades fairly quickly, leaving a thin frothy ring of bubbles along the edges of the beer. The beer has good legs. It's coats the glass, tints it, and settles down with the foam as it drinks. Minimal lacing though.

S: The nose is sweet and spicy. It smells a bit like cinnamon toast crunch. I get roasted malt, vanilla, chocolate, cinnamon/sugar, hot pepper spice, and caramel. I am excite!

T: Wow. It starts out smooth and sweet with big roasted bitters, toast, dark chocolate, and milk chocolate. The cinnamon and hot pepper notes begin to shine right after the first sip. I was not expecting it from this beer, and it's glorious. The finish is sweet, bitter, and spicy. Really excellent.

M: Full bodied beer. It's smooth and coating all the way through. Syrupy to start, but it fades to mainly heat in the finish.

O: This beer is legit. Put it up there with Hunahpu. The sugar and spice play off each other perfectly, the roast is just right (not overpowering), the flavors mingle on the palate, and finish perfectly. Love it. I wish I had more of it.

A really nice looking stout - full creamy mocha head with nice retention. The cinnamon is pretty potent - unlike any other beer I can think of. Dark chocolate, licorice, cinnamon, some light heat. Everything seems to work but I never want to drink more than 6oz of this at a time again - tastes like a christmas cookie.

Appearance- pours out a viscous oily black. Has a very solid body to it. Substantial.

Smell- not overwhelming, a little bit of roast, definitely some chocolate and the licorice note. The smallest hint of the cinnamon to come.

Taste- mixed notes of the above flavors with medium roast, starts off fairly normal for the style. However, the most interesting part is the 2nd level, that is where you get the spicy and the cinnamon. The closest thing I've had in terms of that spicy balance was New Belgium's one off Coco Mole. This one is less spicy overall but more balanced. Out of the ordinary and that's a very good thing.

Mouthfeel- the vicousness of the pour translates through, can detect the oiliness of the body, making it very smooth and go down easily.

Overall- had this in tap at the release then broke out a bottle this past weekend. Really big fan of this, great job by both Pine Box and Fremont, two folks doing work on the Seattle beer scene.