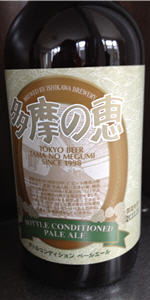 weird. 330 ml bottle with all the Japanese markings, purchased from Murakai grocery store in Costa Mesa, Ca. super heavy-duty cap too! interesting store- Japanese whiskey I have never seen anywhere else which looked pretty decent. some interesting brews there too!
let's pour! "bottle conditioned"... opens with a psssh! two-finger head, soft and creamy. totally neutral perspective, awaiting this one.... hazy gold color, some fruit in the aroma. no hop bitterness in the smell.... not much smell at all, really, though....
taste is slightly bitter, getting the hops here. a little bit. some malt breadiness.... the pour is reminiscent of a Belgian pale. I DID have a Westvleteren Blonde earlier today.... this is not quite as yummy but the look is similar... kind of dry, which is not so Belgian.... but very good overall. this is very decent.

A: Pours a copper color with a small head that fades to bits of lacing.

S: Aroma of malt sweetness along with some pine and citrus in the background.

T: Taste of malt sweetness with some herbs and bit of citrus. Nice bitterness and a clean finish.

O: Enjoyable beer that is easy to drink. One of the more unique beers I have enjoyed in Japan.

A: The beer is clear butterscotch in color and has no visible signs of carbonation. It poured with a thin off white head that died down but never completely faded away.
S: The smell is very interesting and has notes of sweetness and herbs along with hints of citrus and pine resin hops.
T: The taste is similar to the smell but is a little maltier with hints of pale malts.
M: It feels a bit shy of being medium-bodied on the palate and has a low to moderate amount of carbonation.
O: This is a very interesting and unique beer that is flavorful and easy to drink.

A: Pours a dark golden yellow (almost butterscotch) in color with no visible carbonation. The beer has a half finger tall soapy off-white head that reduces to a thin film over the majority of the surface of the beer and a thicker ring at the edges of the glass. Moderate lacing is observed.

S: Some malt sweetness with a very light note of adjunct malts (more grain than corn) along with some light notes of pine, citrus, and earthiness. Some light herbiness.

T: Starts slightly sweet from the malts with some light hints of adjunct malt flavors (mostly grain). There is a very interesting flavor of herbs along with very light pine, citrus, and earthy hops that has very little bitterness. Well balanced.

M: Medium bodied with moderate amounts of carbonation. Smooth and coats the inside of your mouth.

O: Very enjoyable, very easy to drink, and definitely one that I would get another time. A very interesting aroma and a very pleasant flavor. One of the more interesting beers that I have had, and one of the best from Japan.

Purchased at Nijiya Market off of Convoy St. in Clairemont Mesa.

A: Pours a hazy, golden amber in color with a good amount of head and some particulates. Head retention is somewhat poor, subsiding to a thin layer of bubbles within minutes. No lacing on the glass as you drink.

S: Very sweet, fruity aroma. Caught me a bit by surprise as I wasn't sure what to expect. Apple cider, honey, cinnamon and malts. A bit of alcohol and maybe some malts in the background. Now that I see it's a Belgian style brew, it makes more sense.

T: Fruits and spice are what really shine here. There is also an earthy, yeasy flavor that comes through especially on the backend. Some hops are present towards the end. The aftertaste is very bitter and astringent, almost like the acidity of a wine.

M: Light in body with a good amount of carbonation, this beer kinda clings to your tongue before sliding down your throat. I could probably use a little bit more chewiness or a bit of cream, but it's not bad.

D: While this beer is light and refreshing, the aftertaste really kills it for me. I don't think I could drink more than one of these and probably won't seek it out again, but it was nice to try something new. A Japanese attempt at a Belgian-style pale ale. Interesting, to say the least.

A - Pours a cloudy golden yellow. Unfiltered, so there's some sediment present.

S - The first impression I got was the smell of Duvel. It's almost as if these Japanese brewers decided to try to recreate a lower ABV version of Duvel.

T - Smooth and flavorful. Malty and bready, but balanced and very nice overall.

M - Light carbonation with a smooth feel throughout. Finishes nicely.

D - Supremely drinkable. Modest ABV coupled with quality flavors, put together in a nice package. A great pale ale in the Belgian style, but coming from Japan.

500mL bottle, 650 yen at Tokyo Station wine/sake store (B1 level near Narita Express). Most of the text on the bottle is a combination of kanji and hiragana, but I can read the katakana, it says "beer"). The beer is hazy and unfiltered, pale straw color with 2-fingers of foam. It smells like a Belgian Pale Ale, sweet and a little spicy, esters, caramel malt. Taste of sweet malts up front, with lingering esters in the aftertaste. Very Belgian-like. Spritzy and lively, thicker than many ales, about the right body for a BPA. Easy drinking and delicious.