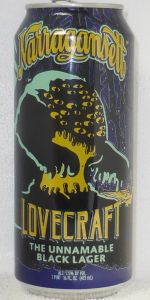 I bought The Unnamable Black Lager on a whim, because I enjoy tasting beers that go against convention.

For a dark beer, it's not strongly aromatic, but the aromas it has are very nice. A mixture of vanilla and chocolate, with some pleasant fruity undertones. It has a very smooth mouth feel, with light, unintrusive carbonation. Unfortunately, for what this beer has in smell and feel, it lacks in taste. The initial flavor is very much that of a lager, but it is quickly followed by an overwhelming, smokey finish. As a big fan of dark beers, I normally enjoy smokey, earthy flavors, but this one is a bit too much for me, and it lingers on the palate well beyond its welcome.

Maybe some peoples' cup of tea, but not mine.

L -- Very surprised at how pretty this beer is. Gentle pour into a tulip produces a huge, four-finger head of dense off-white foam with great retention and lacing. 1,000 lumens passed through the glass reveals a very dark reddish amber with moderate carbonation. The can is a looker, too.
S -- Grassy hops, bakers chocolate, roasted barley malts, and faint metallic bile
T -- Lots of herbal and grassy hops upfront, followed by bittersweet chocolate, well-roasted malts, and a little bit of fruity yeast esters. Porter-like, but cleaner flavors
F -- Medium mouthfeel with an astringent finish

I've really enjoyed following this series through all of its twists-and-turns, successes and failures, surprises and "yeah obviously they won't be making a great ______ but whatever"s. The Lovecraft connection is kind of tenuous on a lot of these, and the flavor text on the back of the cans has sometimes been pretty hokey, but this one is nicely-done. "An elixir meant to be untouched by man — a black liquid said to cripple even the strongest of wills," indeed.

Pours very nicely... a deep, dark garnet-red/brownish colored beer with some menacing crimson tones. The head is impressively stable and builds up with an imposing collar of several fingers of light-khaki bubbles. Lace is rather spectacular too with some cohesive strata showing up after the initial pour and first few sips.

Nose is herbal, lightly chocolatey and surprisingly hoppy with some light notes of pine and some charred malt aspects as well. A bit dank and green with some mildly skunky notes and a touch of smoke in there as well. Ethanol seems to come forward a little bit, which makes sense as this is a kind of "imperial schwarzbier" or something. Light nutmeg and baking spice here too. Not bad at all. Doesn't blow my mind but it's more than I expected, and I like the sort of off-the-cuff hoppy edge it randomly seems to have.

Flavor is very heavy on the char, some light orchard fruit notes, dark pit fruit, sharp ethanol and a bitter piney/resinous note towards the mid-finish section of the tongue. It's a little lacking in body but I do like the quick flashes of brown bread, coffee grounds and smoky elements that come out a bit. Bitter coffee flavors start to come out a bit more on my second pour. Bitterness lingers moderately-long with a very acidic, grassy and slightly-harsh finish.

Carbonation is very lively and bubbly, kind of carrying this a bit further than the somewhat-weak body seems to want to. Wish this wasn't as fermented as it was. In my opinion, a strong schwarzbier is a good idea and can be/has been done superbly-well, but this is a few steps away from that. For one, it feels too dry... this would probably have been better with the same recipe and an intentionally less-attenuative fermentation so it could have a bit of sweetness and body to it. I actually really dig this beer for whatever reason, though. Maybe it's the charm of the series. Honestly, most of these have been hugely flawed in specific ways, but this one is pretty close to being superbly-enjoyable. Maybe it should've just been in the 6% range, but other than that I think it's worthwhile. Price wasn't bad either, as expected.

A very decent reasonably priced take on a schwarzbier, from a brewery that cannot seem to break a 4 rating.

A little expensive beer from Gansett, but well worth it.
Drinking from the Tall-Boy can.
Imagine it is dark black with a traditional Gansett Head.(Poured an earlier one in a glass)
The first taste roasted coffee with a decent malt backbone leaving a residual mild sweetness, mild carbonation. I would bet they do not change the water profile from the lager.
Overall very solid beer where the 7.5 abv is well hidden in a tasteful dark lager.

Deep and dark with average head and nice lacing. Aroma of sweet malt and taste is good, with dark malts, hop bitterness coming to a good balance. Finish is relatively clean and mouth feel is lighter than I would have expected with hop bitterness pleasant and malts noticeable but not overpowering.

A: Pours an opaque yet still clear very dark brown approaching jet black in color with moderate amounts of active visible carbonation rising fairly quickly from the bottom of the glass and faint dark cola brown highlights. The beer has a three finger tall sudsy foamy dark beige head that reduces to a medium to large sized patch of medium thick film surrounded by a large patch of thin film covering the remainder of the surface of the beer and a thin ring at the edges of the glass. Moderate to significant amounts of lacing are observed.

O: Easy to drink and enjoyable, a really nice inexpensive American example of the schwarzbier style. Definitely worth grabbing, probably the best beer in the series thus far.

Pint can into a tankard.

Appearance: Near black with a huge leathery head. Lots of lacing.

Aroma: Not a huge nose. Some grassiness, some dark malt.

Taste: Much more flavor than aroma. Some bitter coffee-type taste, a vanilla accent, and a big grassy bite. Good mix of lager and dark ale flavors.

16oz can pours a medium to dark brown color with an inch of frothy light brown head. Lots of lacing. The aroma is roasted malts with some sweet chocolate, earth, and coffee. The taste is roasty with good amounts of bitter dark chocolate, coffee, earth, and char. Creamy mouthfeel with lots of carbonation. This is a style you don't see around much so I'm glad it got made. Probably the best of the Lovecraft series and a really good Schwarzbier that I hope to buy more of.

Pours a medium brown from the can, light tan head with a bit of frothy creaminess to it.

Aroma: toasted and roasted malts. Subtle coffee and some milk chocolate there as well.

Taste: bitter roasted flavor up front which fades to subtle chocolate notes. Simple and to the point. Good, not great. I normally hate Narragansett beers but this is one I actually enjoyed.