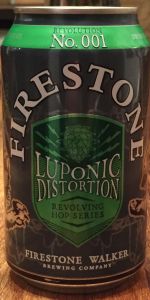 Notes: An ever-evolving mix of experimental hops, designed to deliver mind-blowing flavors that break the rules with each new release. The unique revolution number on the label tells you which release you have in hand. Crack fresh and enjoy the show.

Luponic Distortion Revolution No. 001 features a blend of six different hop cultivars from the 2015 harvest, with an emphasis on a zesty tropical fruit-driven experimental hop to create something entirely unique. A wheat malt base provides a clean canvas for showcasing a pure hop character. Aromas of pineapple, papaya and citrus creamsicle explode out of the glass. Resinous undertones yield to flavors of candied mango, red grapefruit zest and fresh green tea, all dissipating quickly into a clean, dry finish.

Luponic Distortion is best if enjoyed within 90 days of its bottling date.

Didn't think I was going to see this for weeks! But walked into my local BevMo tonight and saw it there....in cans and bottles (bottling date...6 days ago!). Went to the cooler and got the bottles. On paper I wondered if this was going to be FW's answer to Sierra Nevada Hop Hunter...and you know what? I am convinced it is.

L: Its light! Man oh man...for an IPA they don't get much lighter. Think darker than Miller Light but lighter than High Life. Yeah....one of the lightest IPA's I have ever seen! SRM 3-4.
S: Fruity hop nose. Similar to Union Jack, but not as complex. Its juicy in the nose, but not on the palate.
T: Bone dry, resinous, and truly Firestone. Hop flavor is there, but not much else from the malt. Its meant to highlight the hop, and it does very well!
F: Lighter, but it in a good way. Hops are citrusy and fruity but with the faintest whisper of candy (bubble gum or cotton candy)
O: This is a winner. Its really tasty. However, thinking of QPR in the Firestone line, I would take this over Easy Jack, but sadly, I would probably take a 6'er of fresh Union Jack or a 4 pack of Double Jack over this at the same price.

Last Words: Firestone's answer to Hop Hunter. However, when my local grocery store has Hop Hunter at $13 for a 12 pack and this at $10 for a 6 pack, I'll choose Sierra Nevada. They are very similar and tasty. Hopefully FW can put this in 12 packs to compete in price with Sierra Nevada. All things equal, I appreciate this just a tad more.

Luponic Distortion? Really? I get a clarity of hops like I've never sensed before! I will suggest, however, that I can see how different varieties of hops have been distorted into one. It's fruity in a regular way, a citrusy way, and a tropical way - and I know that citrus fruits are generally tropical fruits, and thus all of those are "fruity", but I'm making a separation here. Some fruit descriptors include: orange, pineapple, mango, apple, pear, grape, papaya, peach, apricot, lemon and grapefruit. It's also softly piney/spruce-like (in a very pleasant way like a Xmas tree), resinous, grassy, and even a touch mineralish, leafy and earthy. I'm sure that not everything is coming from hops as the yeast clearly has something to do with it, but it comes off generally as "hoppy". The saving grace is that it's not overdone. The malt remains present, basic, but present; and the hops aren't too aggressive or raspy, nor is the bitterness too much. In fact, it doesn't seem to be more than 45 IBUs, although I wouldn't be surprised if it was. It's just incredibly hoppy, but that seems to come more from dry-hopping than anything else. In the finish it settles down, leaving the mineralish component to step forward a bit (think granite, or perhaps citrus pith) along with more pine and splashes of melon and lemon. A really nice ride! Totally for hop heads, but at the same time really accessible and interesting, and even refreshing. I think that people who wouldn't normally like hoppy beers would enjoy this one because of its fruitiness and restrained bitterness.

Pours a beautiful golden color. The head is two fingers and white in shade. Retention is alright, and some lacing sticks to the glass. All told, though, it looks amazing.

The first thing I get from the aroma are notes of bubblegum, lemon, and peach. Eventually, the hop notes evolve into a dank tangerine quality...and a catty, oniony one, too. A fine hop showcase, but not every aspect is wowing me.

This has a slightly heavier bitterness than the nose suggested. I first taste flavors of tobacco, earth, and pine - still, it's not THAT bitter. Fruity characteristics enter around the middle and help finish it off: I pick up subtle tangerine, bubblegum, lemon, and melon. It's a fairly simple profile, but this beer knows it's trying to be a hop showcase rather than a complex, malty beer. Having said that, I find the general taste average on account of the timid flavors and lack of depth.

Wow, this one goes down easily. It's a bit lightweight, but also very agile on the palate. Zesty carbonation and a bone-dry finish seal the drinkability deal beautifully.

Very easygoing, which I like. Problem is, that easygoing nature also brings with it some blandness. It kind of has that "hop water" thing going on (thankfully without the biting bitterness). Not bad, just pretty forgettable - bring on the next one, I say!

Brilliantly clear metallic-gold body with an incredibly active surge of micro-bubbles churns beneath two fingers of beige foam. The raft moves together, leaving the sides free of lacing. Superior retention.

Despite no longer being at the bleeding edge of freshness, the hops dominate the aroma in a solid herbaceous/fruity blast. The wide variety utilized makes it difficult to pin down the contributions of any given type - though the citrus/papaya notes are most prominent, hints of alpine strawberry and an herbal note move the nose away from any tropical element.

On the palate the emphasis shifts to phenolics and the spicier side of the hops - a zesty citrus bitterness lasts throughout, but dandelion greens, negi, and other slightly savory flavors give the flavor profile a certain dissonance against the fruitier notes that remain. The wheat cuts through the hops more than a standard pale malt base, and helps harmonize everything in the finish, which is dry and almost nutty.

Light-bodied but with full carbonation - a refreshing ale for Summer.

The hops clash more than they synergize in this beer - although the wheat helps bring things together which surprised me given that I didn't find the hops/wheat combination to work as well in Fortunate Islands, which is similar in some aspects. Worth a try in any case, and pleasant in the heat.

Can. Hops are odd on the nose. Sorta weird. Incredibly hard to describe. Apple juice and leather? No idea. Really hard to describe but its unique and slightly uninviting. Flavor isn't changing my mind much. Its relatively innocuous. Aside from that, it is a bore. Laughable that a beer like this has a rating well above iconic IPAs.

Taste is light and refreshing. Very little malt, yet the mouthfeel is light and crisp. The hop character is well balanced and not overly bitter, but also not very boisterous. Pine and grapefruit character are the most dominant. For me, it tastes like a step up from a session IPA ( which it basically is).

Overall, I could see drinking a few of these. They are light and simple. However, I must say in comparison to a stone enjoy by, this tastes like lightly flavored water. I appreciate the direction they are going to ensure freshness, but I think future batches need to be amplified a bit more. I see this pairing well with some Chinese pork belly steam buns. It gets an 86/100.

Canned on 2/17/16, three days old. It's a rich, biting citrus-heavy IPA. Light-bodied without malt character. The aroma has a tropical mango note, but the flavor dives into more grapefruit and floral notes. This doesn't blow your palate away like the thick hazy IPAs, and I appreciate that. It's fun, interesting and you can work through a few of them.

Pours a crystal clear pale gold in color with a finger of white head. Aroma is very subdued with only a bit of resiny hops. I don't get much in the way of the promised tropical fruits. I do get resiny hops with a moderate bittenress. Decent mouthfeel with a medium-light body and moderate carbonation. A decent beer but nothing special.

i think this series is long overdue form these guys. great name, and great brewery, the beer had to be good right? especially the first one. on tap at federal bar and grill, its a real nice looking pint. super pale, suggesting a pils malt base even, but with a real tall and regal and rich white head, great retention and lace, pretty in the shaker pint. it smells awesome too, heavy oils to this one, but more citrus than pine, which you dont always find, and there just isnt very much malt interference here. so much dankness here, its really and truly heady in the weedy hops sense, fresh and vegetal sure, but also with hints of cantaloupe, lime, honey, elderflower, white peach, and juicy whole cones. its fire really. the crazy thing is how easy it is to drink. a pint went down like nothing, three went down like nothing, and i worried about taking it any further. furthur. tunes. right. this thing is memorable, and im sure the whole series will be this good. this is what these guys do best, and when fresh, its really hard to beat this one as a session hoppy beer. sensational.

Amazing beer! Initial smell and flavor overwhelm with fresh hop aroma. Flavor carries on your tongue but does not overpower or last too long. It leaves you wanting more after every sip. Has to be one of the most delicious and drinkable IPAs around. No need to go to a new version just keep making this!

Starts with a wonderfully fresh aroma. The powerful hop aroma reminds me of homebrewing. Major grapefruit and mango. Wow! The first sip was like taking a big bite of a tropical fruit salad, in the best possible way. The taste has sweet malt, melon, grapefruit, pine, and herbs. Perfectly balanced, and finishes dry with a little spiciness. Light bodied and very drinkable. This is a standout pale ale, one of the best I've ever had.

Tap at Cask and Vine
Brilliantly clear medium gold with a huge frothy white head that persists. Resinous pine with some earthy notes mixed with bits of juicy tropical fruit and just a touch of garlic. Faint bready sweet maltiness deep underneath provides a solid base. Pretty good beer, I might have to find some cans.