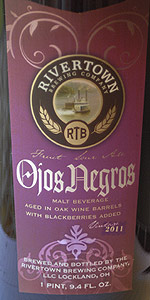 Notes: A sour ale fermented with Belgian wild yeast from the Senne Valley and aged in oak wine barrels with fresh blackberries.
View: Beers | Place Reviews
Reviews: 41 | Ratings: 252 | Log in to view all ratings and sort
Reviews by cjgiant:

Bottle vintage 2015:
Pouring the beer yielded a dusty rose pour with large soap bubbles atop the beer. These faded quickly to a small fizz that also left in fairly short time. Not wholly uncommon for sour beers, but the flat look and dull body could be more enticing.

The nose declares this beer a sour, for sure. There's a musty tartness more than funk. Crab apple, lime, tart berries, perhaps (there is a fruitiness behind this, but I cannot distinguish it to be the blackberries that were used).

The liquid hitting the front of my tongue isn't as tart as expected. Moving it further back, however, starts my whole palate tingling with tart, leading to sour. The sour is medium strong and mildly vinegar-like, but at the same time nicely restrained. The beer does not have much carbonation, but the sour makes up for it. Again, I cannot distinctly say I get blackberry here, but I can't say I don't. I don't eat a lot of blackberries to distinguish the flavor - but I can tell there is something adding a nice fruit aspect on top of just sourness. I also get a light molded wood like note from the barrel aging.

I rather enjoyed this beer's overall makeup even though I had trouble really discerning its individual qualities. I'm going to chalk this one up to a case of the whole is enjoyable and independent of the discernibility of its parts.

Tastes great, but this beer is so turbid that chunks of blackberry ( I hope its blackberry) are floating in it.

Not sure that I could taste a lot of fruit character due to how insanely sour this beer is. But overall tasty

I was so disappointed by Ojos Negros. I was hoping for something similar to Liefman’s Cuvee-Brut where the beer was tart but fruity with decent carbonation. Instead, Ojos Negros is flat, dry, and sour sans fruit. Perhaps I aged the bottle too long or maybe my expectations were wrong.

Pours with a slight crackle of carbonation, good clarity with minimal lacing on top. Funky tart nose with hints of blackberry jam. Assertive but level tartness throughout, bit of cellar funk and medicinal phenols. Kiss of blackberry flavor in the middle, dry finish.

This beer talks to the palate about patience, lots of flavor and balance with some many nuances. Lots of fun to sip.

Ojos Negros from Rivertown Brewery & Barrel House
Beer rating: 92 out of 100 with 252 ratings