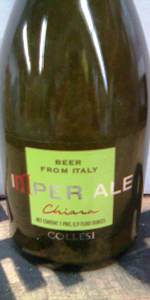 Notes: Fresh and harmonious, a well-balanced light beer obtained from Pilsen Malt. Unpasteurized and naturally bottle conditioned, Collesi Chiara Craft Beer instantly captivates with its bright and shiny golden color. Its rich foam with a scent of malt has herbal hints that unite with tropical and citrus undertones. The harmonious and fruity taste of Collesi Chiara Craft Beer gives the palate an immediate sensation of freshness that closes with cider notes.

Food Pairings: The Collesi Chiara Craft Beer is very pleasant as an aperitif, and paired with light appetizers. It’s optimal with vegetables, particularly artichokes and salads, and with soups and cheeses, such as buffalo mozzarella and caciotta. With its balanced body, Collesi Chiara Craft Beer goes together well with shellfish, and with fish and white meats freshly seasoned with ginger and cardamom. Perfect also for contrasting the spicy notes in peppery dishes.

It seems that I prematurely wrapped up my recent deep-delve into my backlog of foreign & imported beers! I had purchased several on clearance from the Country Garden Six-Pack & set them aside, only to run into the usual out-of-sight, out-of-mind problem. No time like the present!

From the Bottle (!): "Ale beer, naturally re-fermented in the bottle, with a very fine grain, rich and creamy foam and good perlage."; "Elegant and fresh flavour, given by the combination of intense aromas and citrus and a pleasant and tropical aftertaste."

I assumed that the identification of this beer was correct as a Belgian Wit so I did some in-Bottle (!) agitation before Pop!ping the cap. It had a heavy inner seal and let go rather noisily. I gave it a steady, heavy-handed C-Line pour that raised just under two fingers of foamy, soapy, rocky, bone-white head with modest retention. Color was a hazy Straw-Yellow (SRM = > 2, < 4). Nose had a sweet, fruity, white wine vinousness, not just grapes, but also berries and a light spiciness. Hmm. Mouthfeel was thin-to-medium, not terribly removed from watery. The taste was odd & so I brought things to a halt to investigate. It is a Belgian Blonde Ale! 8={}

Now, it made sense. The yeast & malt had combined to give it an herbal fruitiness. That's what I smelled & was tasting. It was still light & spritzy in terms of mouthfeel, but it made more sense as far as its correct style! I do not agree with "tropical", but definitely "fruity". I also concur with a finish of "cider notes." This was a decent BBA & one that I can easily envision being served with a salad course or fish. I am furious that someone misled all of us into thinking that it was a Belgian Witbier. YMMV.

Got to try this at a local Upscale Italian Restaurant. Ran about 14 bucks for the 17oz bottle. Poured a hazy blonde color. Sweet smell, fruity citrusy esters. Very efffervescent. Bubbling in the glass. Notable wheat characteristics. No hippiness present. Drinkable session beer moderate 6 percent abv. I really enjoyed this beer more so than other wheats on the market but would hesitate to buy it at its price.

neat italian brew here, the first and as far as i know lightest in their color spectrum of beautiful bottles. the pour on this is pale straw colored, very very light, glowing yellow with lots of haze but no visible sediment and a white head an inch tall that is gorgeous but only lasts a minute. the nose on this is yeast forward, very cool effervescent yeast, has cleaned up most of the sugar in this very dry and sessionable brew. white wheat gives it a light base and a summery grain feel, while whatever hops are here are minimal. there is a delicate citrus profile in the finish, but i taste yeast above all else. a really nice complete almost farmhouse style yeast, without the funk but with all the vivacity. fun stuff. clean in the mouth, easy drinking, and carbonated to perfection. no bottle date here, and it was a gift, but i suspect freshness may not be optimal. i look forward to trying the other beers in this series.

Poured from a brown 25.4 oz. bottle. Has a whiteish/yellow color with a 1/2 inch head. Smell is mild, a bit of lemons, some wheat. Taste is wheat zing, a bit of lemons, mildly spiced, refreshing yet not overly flavorful. Feels full bodied in the mouth and overall is a pretty good beer, but a little milder than many wit's.

Nothing pseudo-witty to start things off here, let's just get into it, shall we? This stuff pours a hazy lemon-straw topped by a finger of white foam. The floaties populating the liquid space remind me of when I used to feed flaked food to my fish back in the day. The nose comprises sweetgrass, light lemon zest, light sweet biscuit, mild flowers, and a kiss of honey. The taste sharpens the lemon a tad, adds in a pinch of spice (mostly black pepper, clove, and cardamom), and ratchets down the grassy aspects. The body is a light medium, with a light moderate carbonation and a wet feel. Overall, an overtly average wit at best, one that doesn't really express itself to its ostensible potential (I blame the overprotective parents) and thus leaves me rather wanting.

The beer was a gift shared at a testing. I am not sure how available this is in the states, but I have never seen it in a store. The beer poured a golden yellow color with an aggressive white head that bubbled along the sides while leaving little lacing. It produced a dry fruity aroma that did not make a huge impression, but makes the drinker aware that this is something more than a macro. It is difficult to get past the bubbles in the tasting. The carbonation is so aggressive, it is difficult to identify tastes. One may notice tart apples or pears. The aftertaste reminded me a little of diet soda, which obviously is not a good reflection of the beer. The carbonation did a commendable job of sweeping away the diet soda aspects. After having this beer, I do not feel a strong need to search for more.

Appearance- Cloudy pale yellow color with chunks of yeast floating in it. Nice fingers worth of foamy head with a fair amount of runny lace.

Smell- Citrus fruit aroma with a note of coriander.

Taste- Mild fruity taste with notes of coriander and pale malt. Reminds me of a slightly toned down Hoegaarden.

Mouthfeel- Light bodied and smooth with a nice amount of prickly carbonation.

Overall- Nice and refreshing. A good example of the style. A bit pricey though, I paid $10.99 for a pint sized bottle.

A- Pours a slightly hazy yellow liquid with some orange highlights. The white head settles to a splotchy covering that has some decent retention.

S- There is a definite fruitiness with hints of passion fruit, citrus, and mango. There malt brings a white bread aspect to it.

T- The fruitiness hits up front with everything picked up in the aroma noticeable on the palate. The maltiness brings a sweet finish.

M- The carbonation is abundant, but kept in check. The body is on the creamy side but finishes light.

O- A nice take on the style. Drinks nicely.