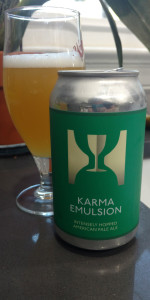 Very nice collaboration between 2 of the best.

Poured from a 16 oz can dated 10/23/20 into the test glass
A - Hazy straw color, Gently carbonated, that carbonation collects topside forming a lasting loose froth. Lovely on the eyes.
S - Like a quiet walk through a forest of orange, pineapple, pine, and apricot trees in full harvest season. Add a bit of sweet malt and there you have it.
T - Apricot and orange, with again hints of pineapple, green grape skin, pine, The malt is more expressive but still a supporting act. One that adds to the experience.
M - Soft on the palate, but with all that tropical components, the pine and malts keep this from tilting to the sweet side.
A lovely almost evapratory dry finish.
O - A very nuanced and superbly balanced pale ale, Yes it is full hop display, with more depth than most
I can understand why the label includes " think Hophands meets Edward"

L: Hazy yellow with a foamy head and good lacing.

Overall: A very hoppy pale ale that is extremely drinkable. Lots of classic hop character combined with fruity yeast notes. Definitely worth getting.

A gift from a friend. Delightful celebration of hops. I would call it an IPA, not a Pale Ale. Pours a hazy light gold. Strong citrus smell. Taste follows smell. It is a great example in my opinion of a New England IPA.

Pours vibrant and cloudy yellow orange with a frothy white pillow of a head. Good retention and lacing.

Smells of mostly grapefruit with hints of lemon and lime zest.

Flavor hits hard with grapefruit at first followed by orange and mild notions of vanilla.

The feel is incredibly soft and creamy, full bodied, and has a nice juicy bite with a touch of bitterness.

This beer is outstanding. I could drink this all day, everyday. A real winner of a "collaboration" between two giants. Cheers.

Pours a vibrant, hazy pale orange in color with a finger of short lived white head that leaves behind decent lacing. The first whiff is great and full of peach but later mellows out a bit; I get melon, stone fruit, and fresh cut grass. Taste hits the same notes as the aroma but in reverse order; cut grass is the first flavor with melon, stone fruit, and some citrus in the background. Finish is balanced but turns quickly aqueous as all the flavors wash away. Medium-light body with moderate carbonation. Overall this is a tasty beer, in today's world this seems more like a session IPA than an American Pale Ale.

Poured from a 12oz can

It is a dull, hazy gold. An initially substantial white froth, but it receded very rapidly.

It smells very good. Like a large flower bloom with some lemon, grapefruit, and some rustic/earthyness. Like minerals and fruit rind.

A lot of the same flavors, but they don't really deliver. The pithy grapefruit and lemon fall flat really suddenly and there is nothing but light crackery grains and an acidic and aspirin like bitterness.

Very watery and dry and airy. Very odd feel. It's like something is sucking the carbonation out of it as you consume it, or more like drinking through a straw with a hole in it.

Definitely nothing really offensive about this one, but it doesn't pop either. It really reminds me of a "session" IPA.

In a pint glass the beer was a hazy yellow color There was a tiny white head and no lace.
Some citrus, some earthiness.
Ditto for the taste A bit underwhelming.
Light-bodied.

12 oz can poured into shakers pint.

A: Very little head at all. Body is a murky hazy tan yellow.

O: Not very spectacular in the lexicon of amazing beers that he brews this one is pretty average.

A: Hazey white pour on top with a light orange pale yellow appearance

S: Muted aromas, mostly peach and some melon here with some fresh pale malts and a bit of grass

T: Chewy pine resin with honeydew melon, grapefruit, tangerine , mango and orange. Grass is also present. Overall very good for a 5.2% and chewy for the style. Very good stuff for an APA

Light body. Feel seems heavier than it should, and syrupy at most mid sip. A touch more carb would put been nice.

awesome blend of orange, grapefruit, pineapple, super refreshing and crisp tropical citrus flavor. not much in terms of malt but some nice grassy and floral green notes, comes together very smooth. insanely tasty!

Pours a hazy whitish-gold hue with a thin head into my glass. Old school hop bill and it results in a balanced distribution of hop bitterness across the taste buds. Slight puckering finish. I would love to drink this more often. It's labeled on here as an APA but comes off more as a session IPA. Your mileage may vary.

The appearance was a glossy to burnt semi-hazy bronzed orange color with a bar pour’s kind of slim white head that quickly dissipated. Light lacing. The smell started off with sweet dried grassy hops flowing into a dried floral and a crisp sweet malt. A sly amount of citrus and tropical fruit slide in underneath. The flavor takes the previously mentioned flavors and blends but mainly leans towards the sweeter side. Malty to juicy aftertaste with a nice smooth finish. On the palate, this one sat about a light to medium on the body with a nice sessionability about it. Carbonation seems to ride nicely underneath. Overall, it’s a pretty good APA that I would be willing to come back to. Could definitely go well with some grilled seafood.

This one pours a lightly hazy yellow, with a small head, and a good amount of lacing.

Smells like pretty herbal citrus, with grass, pine and peach.

This definitely feels very much affected by the Tired Hands factor, as it's a hazy type creamsicle, with lots of juicy fruit, grapefruit and peach, and a definite herbal character. There's no malt character whatsoever.

This is light bodied, creamy and deceptively full, with a lower level of carbonation.

Pretty cool stuff- not the best from either place, but still quite enjoyable.

Had at Armsby Abbey in Worcester - never heard of this beer. It struck me as an ultra Sierra Nevada - refreshing but with the unique freshness only Hilsl Framstead gives . Such a great beer ....

HEAD: 2cm in height, lasting 3ish minutes but receding down to a surface floater within 20 seconds. Leaves nice even lacing as it recedes.

BODY: Hazy and unfiltered. Murky yellow colour. No yeast or lees are visible within.

Appears aptly carbonated. Not a great look for a pale ale, but generally appealing. I guess they hide behind the "unfiltered = East coast" gimmickry.

AROMA: Good hop profile with floral, slightly lemony, tangy, and yogurty hop notes indicated. In addition to pale and pils malts, I think I find wheat - or at least this aroma's malt aromatics are suggesting a softer pale ale than most do. Maybe oats?

Aromatic intensity is average. Hops could be more pungent/punchy, but this aroma suggests a balanced enjoyable approachable brew.

TASTE & TEXTURE: Pulpy and lemony, with oats or wheat or something bending the malt backbone towards the softer less crisp end of the spectrum. Medium-bodied, with a flat presentation of flavour that fails to accentuate the hop flavours, though a generic floral hop character does emerge as dominant.

Well-carbonated, smooth, wet, lumpy, uneven. Not oily, gushed, explicitly refreshing, astringent, harsh, rough, hot, or boozy. Doesn't parch the palate, but it does bend awkwardly towards an almost farmhouse ale-redolent dryness and reticence, shying away from the clean juiciness that the best pale ales tend to gravitate towards.

Poor depth of flavour. Average duration and intensity of flavour. Even Sierra Nevada pale ale boasts more hop pungency than this does. Comparisons to envelope-pushers like Three Floyds' zombie dust would be insulting to those clearly superior expressions of the style.

OVERALL: A drinkable shrug of an attempt at a pale ale that will appeal mainly to those seduced by the names of the breweries behind it. It feels like they tried to execute a subtle farmhouse ale influence, but the result is a half-hearted let down of a pale ale from two very well regarded breweries. Maybe it's too many cooks in the kitchen, but this is a collaboration I'd pass on if I saw it in the future. I imagine its performance in a blind taste test would be quite poor in comparison to its current 93/100 rating. Give me a Sierra Nevada Pale Ale over this any day - let alone paragons like Alpine Ale or Zombie Dust.

T - follows the smell, minerally, finishes on a grassy or tea-like note

750 mil growler picked up on a recent trip to HF.

Nose is sharp hops with a sweet clean malt contribution.

Overall, a big winner! I didn't know a thing about this until we showed up at HF that day. A solid contender for best PA I've had this year.

The beer pours a bright copper color, hazy and turbid with orange hues and a foamy white head, about two fingers high with excellent retention and lace. The aroma is awesome, really juicy hops, tropical, fruity and citrusy with some floral character that leads to earthy, resinous pine with almost a raw honey aroma before the signature doughy malt and mineral water from Hill Farmstead sneaks out. The flavors are fantastic, juicy tropical fruits, citrus peel bitterness, dank floral flavor with pine and grassy earthiness and doughy malt and mineral water. Tons of hop character, tons of flavor, depth, balance, really top notch pale ale. The mouthfeel is great, coating, medium body, gentle yet lively with a lightly dry finish.

Verdict: A great pale ale from Hill Farmstead, super juicy, dank, nice bitterness and intensely flavorful. It never ceases to amaze me how Hill Farmstead can craft a great hoppy beer, with each being so distinct from each other and so balanced, complex and interesting. Add this to a monster catalogue of hoppy greatness.

Pours a golden straw hue, as most Hill pales look. There's a candied melon aroma that carries through from the nose into the flavor. Some grassiness, some of that simcoe I don't know how to describe it because I'm not a cat person and have never smelled cat pee but by all means infer that it is that flavor. It's refreshing. It's interesting. It's good.

My first beer onsite at the brewery, and it was a good one to start with. It should come as no surprise that a Tired Hands/Hill Farmstead beer would be delicious.

Another delicious brew from the folks at Hill Farmstead. I got quite a haul in my trip up there and while this wasn't one of the 3 best I got while I was there, that should not take away from the fact that this is a great beer!