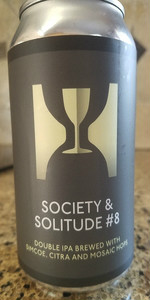 Poured into a 13 oz tulip glass canned on 11/10/2020. Pours a hazy yellow orange with a finger plus sticky white head that leaves a ton of lace as it slowly settles into a thin layer of white bubbles. 5

Mouthfeel is bigger than average, soft and almost creamy, maybe a tad sticky but not dry, and at 8% insanely drinkable. 4.75

Overall this one lives up to its reputation. Truly a masterpiece, from one of the best in the business. 4.75

A- Pours from the 12oz can into a becher glass with a body that is a golden to very light orange and fairly hazy. The cap forms with a foamy, frothy texture to a finger high with great retention. Large sheets of lacing with webs between them decorate the glass.

S- Strong hops emanate from the glass a few feet away with great aromatic strength. The hops suggest a fruity and juicy flavor profile with notes of guava, melon, papaya, dank weed, nectarine, floral and soft citrus. Juicy stone and tropical fruits are just wonderful on the nose. Oats, a spiciness and a medium sweetness come to mind.

MF- Thick and creamy body with a moderate level of carbonation. Incredibly soft and smooth. Ends with an intense oily bitterness.

A lot of IPAs lately lose the delicate juicy and softer hop notes found in the aroma on the palate. This one shifts quite a bit from the aroma but overall a great balance is struck between the bitter, sweet, juicy, floral and other bold flavors. The aroma is just unreal tropical/stone fruit nectar.

Pours a hazy golden orange like what you come to expect from a lot of Hill Farmstead IPAs. There's a great ribbon of citrus aroma on the nose. It is raw sugar cane, melon, with a hint of grapefruit rind on the finish. The mouthfeel is luxurious in a such a way that it would not be out of place at LVMH. I wish they made a 6% version of this because it would be downright delightful. Picking a favorite amongst S&S beers for me would be like picking between my children if I had children.

Another excellent brew from the arguably the best brewery in the world. They are so good with balancing hops that it is ridiculous. This is just another great example!

A world of thanks to Matt for this. This will be my first Hill Farmstead beer.

Pours a fully hazy, orange juice hue, with a creamy, two finger ivory head that sits atop. Head slowly recedes to a thick cap of foam, leaving immense lacing behind. In the glass, the beer looks like an orange julius with a whipped cream topping.

Nose: The can says brewed with Citra, Mosaic, and Simcoe hops, and the first thing that stands out to me, is that each of those hops are detectable in the aroma, in that precise order. A strong Citra opening, with candied grapefruit, orange, and lemon peel. The green, grassy, herbaceous side of Mosaic brings to mind fresh cilantro, before the deep, sweet, earthy berries and grass side takes the lead. In the very back end, there's a musty, earthy, funky note, that almost translates and black pepper-crusted cheese, before the peppery aroma wins over the cheesy funk, all of which is unmistakably Simcoe. They all blend,together, creating secondary aromas of mango, papaya, persimmon, and earthy apricot.

Palate: The first thing that stands out is that this is not a small beer. There's some weight in this one. The Mosaic notes of earthy berries and fresh grass are in the forefront, with bitter orange and grapefruit rind coming in. The grassy notes quickly turn resinous, and then Simcoe begins to surface, with a piquant black peppercorn, and sharp aged cheddar cheese. This Simcoe character paves the way for the finish, and outlives the bitter grass and citrus rind flavour. It truly does finish like an aged sharp cheddar. There's a moderate to significant malt sweetness that definitely screams wheat and oat. The flavourful wheat sweetness paired with the clean, neutral oat sweetness.

Mouthfeel/Body: The beer definitely packs a punch of ABV, and it shows that in its weight. It's big and bold, with a soft, slightly creamy, slightly fluffy feel to it. Given the size of the beer, it has a somewhat impressive level of effervescence, which helps to add some crisp airiness to the texture. The beer is entirely wet, with a slightly astringent finish that grows the more you drink it.

Overall: First things first. This beer is beautifully crafted. There is zero question about that. You can tell a good beer when you taste it, and this is a good beer. I will admit that I'm generally not a huge fan of the really funky side of Simcoe, and this really exhibits that classic black peppered cheddar Simcoe quality. It isn't an inherent fault in the beer, it's just what Simcoe does sometimes (very often). Ignoring that aspect for a moment, the beer is just fantastic, with a really nice bitter finish to contrast a classic New England IPA foundation. There's some complexity in the aroma, there's balance in flavour, and the body is rich and full without being too much. It's all great. I find the flavour of Simcoe hurts the beer a little bit, as a whole, but it's still a beautiful beer, it's still an enjoyable beer, and it certainly deserves some praise. I cannot wait to explore some more offerings from these guys, and get a fuller picture of their work. Until then, this will do. This will do.

Tap @coals on 5/18.
Great light yellow like grapefruit juice like hazy colour.
Aroma is peach and citrus.
Body is medium to medium-light.
Slightly lesser carbo.
Very smooth and super balance of the sweetness and Hops.
Quite easy to drink and enjoyable.
Very nice NEIIPA.

The nose is just as impressive as the look.. pungent hop combo aroma is ridiculously inviting. Huge citrus, both sweet and sour tones. Sour earthy wheat and grains, smooth and creamy smelling oats. The depth and complexity of the nose is nothing short of stunning.

New England style DIPA's feel amazing due to the adjunct combos, especially the "body building" smooth, heady effects of the oats as the tangy wheat malt keeps it light and crispy. Yes! There can be both. Crisp bite>smooth middle> lush and round and then dry, yet juicy in the finish. Wow.

The flavor is a deep... complex triad of hops! Layers of thickly settled hops, smooth creamy effect of oats with the excellent barrage of tangy and crisp wheat. You can literally taste and separate each one within the flavor spectrum, even though they meld together perfectly with an excellent balance held for this awesome style. Other notable flavors include: orange rind style bitterness, star fruit, pithy mango chunks and honeydew melon.

The hops have a depth of charecter so fresh and deep it really is remarkable, even amongst the very best the style has to offer.
World class.

poured into a tulip glass via draft

color is a bright yellow

smell is sweet citrus and grassy

mouthfeel is full and medium carbonation

another beauty from HF!