The Implication
Odd Side Ales 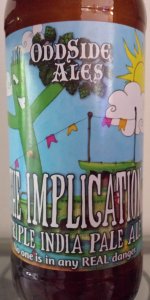 A- A normal to conservative pour creates 1-1/2 fingers of foamy, khaki head. The body is a hazy, golden-orange with light carbonation. The head sustains at a thin foam that covers the surface and leaves wide rings on the glass. It eventually clears to a more golden-yellow brew.

S- Lots of hops off the bat, mostly grapefruit. A little lemon and, maybe, some minty qualities. Significant, sugary sweet, malt backbone. With some warmth, I pick up more of a tobacco and leathery vibe and everything becomes much more robust. There are very subtle hints of tropical fruits throughout.

M- Full bodied and quite viscous with moderate carbonation. Smooth alcohol warmth in the finish. All-in-all, fairly smooth for the huge ABV (13%).

O- Received as a Father's Day gift from my wife, I almost pulled the trigger on this one myself. It's a big, slow sipper. 1 in a sitting is about right. I would do it again as a special occasion purchase (wanna say it was $4-5 a bottle). Wrapping up the glass on an empty stomach, I need to eat something as it's all going to my head. Last night I wrapped up the evening with an Devil Dancer. Both being a "triple IPA," this one really afforded a different experience. Both were kind of barley-wine-ish. It's just a little difficult to really put my finger on the contrasts.

I've had a few triple IPAs (TRIPAS... not like Triple Rice IPA by Kuhnhenn, don't get confused) now, and I've grown to generally expect them to be intensely sweet, hot, and boozy. This beer really isn't any of them -- I suppose it's a little sweet, warm, and boozy, but not like some others I've had... such as Molotov Heavy, which, then again, is a whopping 17% ABV.

Being at 13%, it tastes like a DIPA to me more than it reminds me of a TRIPA. Clean flavors all around with a nice juiciness ... above all, this actually has a nice bit of bitterness on the finish that just seems damn near impossible to find in IPAs at about this ABV and up. Odd Side impresses me with this beer in that it just isn't crazy sweet, so kudos to that. And hey, the hop profile is pretty solid to boot.

Not a game changer by any means, but a super well done high ABV IPA.

Burnt orage body with a ring of white tiny bubbles. Oh citra, don't ever change. Smell has citra hops but in a sweeter body, together producing caramel, pine, grapefruit, lime, orange, candi sugar, and hop dankness. Taste is really sweet, with the caramel malts, sugary booze, and the juicy candied fruit really making their presence known with the resinous pine and hops. Scary good at hiding booze until it warms up a bit. Body is sticky, heavy and a little cloying. I really liked the flavor profile, but it is too sweet to want a whole pint.

I picked up a bottle of Oddside's The Implication last week for $4.29 at The Lager Mill. This one caught my eye and I don't think I've had a hoppy beer that was this strong from Oddsides and I'm interested to see how it will turn out, so lets see how it goes. 2016 Vintage. Poured from a brown 12oz bottle into a snifter.

A- The label is nice, it has a nice design to it and it's a little eye catching. It poured a hazy golden orange color that took on more of a golden hue when held to the light with a little over a fingers worth of bubbly off white head that died down to a thin ring that eventually faded away and it left some spotty lacing behind. This is a pretty nice looking beer, but I wish it had a little more head and retention.

S- The aroma starts off with a higher amount of sweetness with the hops being the first show up and they impart a big fruity hop aromas with some mango, citrus rinds, pineapple and orange juice aromas coming through that goes into a little bit of green hop and dank aroma. up next comes a sweet alcohol aroma that goes right into the malts which impart some pale malt, slight caramel malt, bready, sweet malt and grainy aromas. This beer has a good aroma, I like the hop profile, but it's pretty sweet.

T- The taste seems to be similar to the aroma and it starts off with a lower amount of high sweetness with the hops still being the first to show up and they impart all those big fruit aspects that I got in the aroma with not much green or dank hop aromas. Up next comes the sweet alcohol, it's on the boozy side and it's warming in the chest. Up next comes the malts which impart all the same aspects that they did in the aroma. On the finish there's a lower amount of high bitterness with more sweetness with a boozy, sweet and fruity hops aftertaste. This is a pretty nice tasting beer, I like the hop profile, but it's pretty sweet and boozy.

M- Not the smoothest, a little sticky, a little cloying, on the lighter side of being full bodied with a medium amount of carbonation. The mouthfeel is nice, but I wish it was smoother, not as sweet and not as boozy.

Overall I thought this was a nice beer and it was a solid example of the style, it had pretty much all the aspects that I look for in the style, but when it came to the sweetness and booze they showed up a little more than I would like and that made this beer a little rough around the edges. This beer didn't have good drinkability, the combo of sweetness and warming booze make it a one glass beer. What I like the most about this beer is the aroma, it's good and it's the highlight of this beer. What I like the least about this beer is the sweetness, booze and drinkability, those aspects need some work. I don't think I would get this beer again, but I might not turn one down and I can't say I highly recommend it since it's rough around the edges. All in all I liked this beer, but i didn't love it, it had some really nice hoppy flavors and i liked the bitterness, but the booze and sweetness really held this beer back. It's not a favorite Oddsides beeer and it's just a little above average for the style. Better luck next time guys, this one could use a little work.

A recently purchased twelve ounce bottle with a date stamp that appears to read 06/06/16 poured in a 13oz. tulip.

Look- Pours a nearly transparent dark gold with a couple of centimeters of rapidly disappearing white foam that leaves a fair amount of lacing.

Feel- Oily, sticky and very drinkable despite the huge abv. A little burn as you consume the ounces.

Overall- This is one big unbalanced assault on the palate. It could be Devil Dancers evil twin brother! Biting hops, a giant dose of malt and high octane alcohol. I like it to a fault and would list it somewhere behind RuinTen and Devil Dancer. I'm definitely going to cellar one of these beasts for science! Worth a try for fans of the style.

Always excited to see a new single bottle from OddSide. A 13% TRIPA must be their competitor for the market.

Look - Pours a nice honey golden hue with a finger and a half of off white head that sits atop and dies slowly into the sunset.

Smell - Lots of grassy hop up front with a high level of like honey like sweetness. To simplify things it smells like a less complicated version of hopslam.

Taste - Holds a lot to the nose. Sweet floral aspects with a bit of pineapple with a higher level of sweetness. Alcohol flavors remain minimal. Taste is not overly complex for it being a high ABV TRIPA.

Feel - Feel is moderate to full with a low carbonation. Mildly sticky. Alcohol comes through in low amounts during the finish.

Overall - Super smooth for 13%. To be completely honest this isn't a super complex beer compared to what I was anticipating. Despite the fact this review sounds like a complaint, it is not. You could drink a sixer of this quicker than most other brews at the ABV. As usual, try it for yourself. Less flavor than hopslam, but smoother.

This didn't wow me but I did enjoy it. Wouldn't get it again for the price but it is less than Devil Dancer.
First impression is that the color is too light for a triple ipa and the smell didn't hit with citrus. More of a malt liquor smell, kind of sweet corn. Got a peppery bite in the taste and more of a barleywyne taste and feel. A bit sticky. For all the negatives it still went down easy just didn't think it fits the style well but I haven't had many triples. I don't think it was too hot for 13%. Alcohol heat doesn't bother me though and it seemed hidden. Overall I give it a better rate because it was drinkable and no unpleasant detractors.