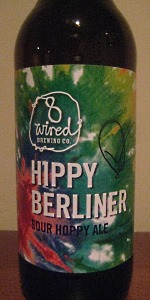 O: Not my kind of beer for sure.

Poured from 0.5-litre bottle into a Spiegelau Adina Prestige goblet. Pours a slightly hazy light golden-yellow color, with a two-finger evanescent white head. A burst of hops on the aroma, with notes of Meyer lemon, grapefruit, sour apple, and light malt, along with just a hint of yeast. All of these are present on the palate as well, with some light hop bitterness and a touch of salinity. There is also a very light mineral note. The finish is dry and crisp. Overall, this brings to mind a light and slightly tart Chardonnay. The reviewed sample was about five months past the Best By date, so the hop bite may have been mitigated somewhat. Still, a very good and refreshing beer.

Clear gold straw in color, it tops with thick white frothy head that well retains with good retention before gradually sinking to a long-lasting bubble sheet atop and leaving lots of lacing patch and spot here and there.

The taste is led by its puckering tartness and sourness. Fruitiness pleasantly unfolds ranging from notes of lime, orange, lychee, apple cider, and tropical fruits. Malt can also be perceived with its bread and grain touch while hop is also there too with suggestion of grass and very small bitterness.

The body is medium with good crisp and lively carbonation through the palate, smooth mouthfeel, refreshing in feeling with a very dry finish. This one is a truly good Berliner Weisse spawned out of its origin, really worthy.

Straw gold with lots of carbonation and a finger of white head. Clear filtered.

Smells like grassy hops and apple cider. Passionfruit, a hint of citrus.

Got on wishbeer, drank in Chiang Mai Aug 31st, 2016. So long since I've had a good version of this style. Really nice with a solid acidity and light hints of hops.

L: See through pale yellow with a frothy white head to it that leaves a small amount of lacing but nice head on top.

S: Peaches and banana with a slight tartness from it as well and she little bit of an acidic tone to it as well.

T: Peaches and a very strong tartness to it. Has a slight acidic tone to it but nothing overpowering like some of the beers.

F: High carbonation and doesn't leave the acid taste in your mouth which is nice.

O: A really great sour beer from these guys! Even my fiance liked this beer and that takes a lot!!

Appearance: It poured a hazy straw yellow colour with less than one finger white head which disappeared almost immediately but left some light lace rings.

Aroma: Strong sour fruitiness with mainly guava, passionfruit, mango and lychee. There was some light grainy malts in the background.

Taste: Quite similar to the aroma, taste starts lightly sour and tropical with passionfruit, mango and pineapple. There was also a hint of grainy malt here and there.

Overall: A nice and crisp Berliner Weisse. Very easy to drink. It had good flavours but could have been even better if the tropical fruits were even stronger. Having said that, I would get this one again.

Pours a hazy light yellow with a foamy white head that settles to wisps of film on top of the beer. Small streaks of lace drip into the remaining beer on the drink down. Smell is slightly sour tropical fruit, passionfruit juice, citrus juice, and acidic aromas. Taste is much the same with sour passionfruit juice, tropical fruit, and acidic flavors on the finish. There is a mild amount of acidity on the palate with each sip. This beer has a good level of carbonation with a crisp mouthfeel. Overall, this is a good beer that is tasty, light, and easy to drink.

From bottle, Pours abright hazy yellowish straw colour with a finger of pure white head that dies to nothing leaving a few lacing rings. Aroma is fruity, light pine and resin notes. Taste of tropical mango, passionfruit, stonefruit and pineapple, Sour and tart with lemon notes.

Nice job 8 wired! It's a berliner the way I like my ISAs - dry and pungent as fuck. I've also trieed lacto ferments. It tastes lie you guys used soft water or something cause it seems like a dry sour

i seem to not be able to detect hop or fresh oaK SUPER WELL. i had this beer described as bubblegum-y. if i'm ot getting bubblegum from belgian yeat iam def no getting it from hop additions. either way i wish i ws living in new zealand.

wish i was better at ratings

500ml bottle - a hoppy New World take on the Berliner Weiss style, and with a label background that I'm pretty certain my toddler could have banged out with ease.

This beer pours a slightly hazy, very pale golden straw colour, with one finger of weakly puffy, somewhat foamy, and mostly just bubbly off-white head, which leaves a bit of ocean plume lace around the glass as it quickly blows off.

The carbonation is quite light and ineffectual in its plainly-wrought frothiness, the body medium-light in weight, and so-so smooth, the multi-pronged sourness taking a certain tithe here. It finishes off-dry, the understated graininess coming round to bear, while the antipodean fruitiness puts 'er in neutral, and the sourness peters off into that good night.

A decent re-invention of this old-school Teutonic style, the addition of sexy new-ish hops not really hurting anything, but rather invigorating the inherent fruitiness, and obviating that 'need' for a shot of syrup to square things. Worthy of a try, especially if you're big on this sort of deal in the first place.

A: strong citrus, grapefruit aroma with some lactic presence detected

A: Opaque straw color with small amount of head

T: Hops provide a strong fruitness, followed by a clean lactic sour finish with no noticeable hop bitterness on the finish

M: Light Bodied with med-carbonation, no sensation of alcohol

O: Made initially for the Great Australasian Beer SpecTAPular (GABS). Wow this is super tasty. The extra hops provide more tropical notes than are usually present in a standard Berliner. However even with the extra hops, the beer tastes and finishes clean. Impressive.